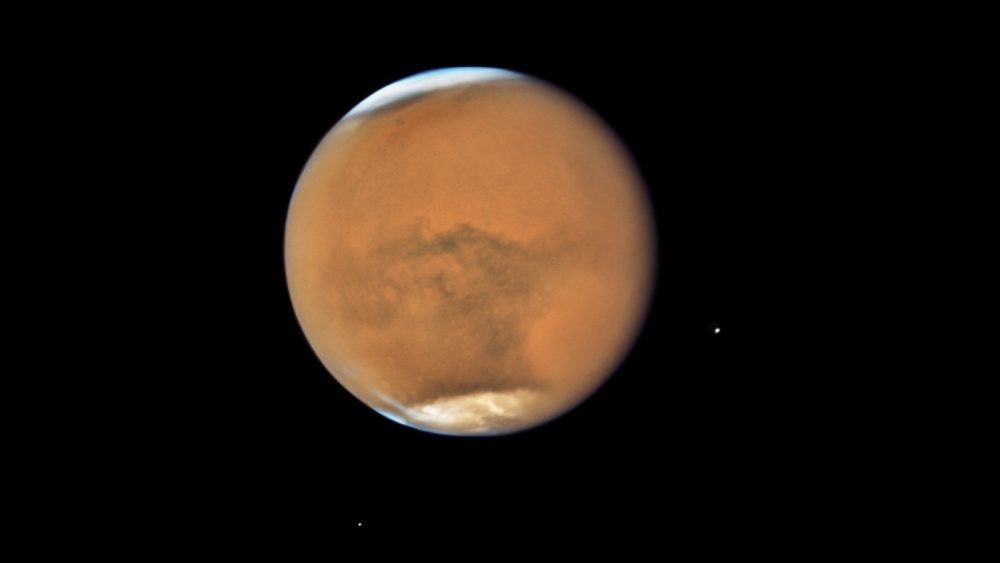 A strange green glow was observed in Mars' atmosphere, and its the first time something like this has been observed on a planet other than Earth.

Scientists have observed a weird green glow in Mars’ atmosphere, and it is the first time that we actually observe this important feature on a planet besides Earth.

On Earth, bright oxygen is created during the polar auroras when the energetic electrons from outer space collide with the upper atmosphere. This oxygen-powered light emission provides the polar auroras their wonderful and distinctive greenish hue. Aurora, though, is just one of the ways in which planetary atmospheres light up.

For example, those on Earth and Mars regularly shine during the day and night as sunlight mixes with atoms and particles within the atmosphere.

Slightly distinct mechanisms produce the daytime and nighttime glow: the nighttime glow happens when split molecules recombine. The daylight glow appears when sunlight directly animates atoms and molecules such as nitrogen and oxygen.

On Earth, the green nightglow is quite subdued, making it best observed from an “edge” perspective, as shown in many spectacular images taken by astronauts aboard the International Space Station (ISS).

This fact can be a problem when looking for it around other planets since its shiny surfaces can drown it.

This green glow has been detected for the first time on Mars by the Trace Gas Orbiter (TGO) of the ExoMars mission, which has been orbiting Mars since October 2016.

“One of the brightest emissions observed on Earth comes from night glow. More specifically, from oxygen atoms emitting a particular wavelength of light that has never been seen around another planet,” explained Jean-Claude Gérard, from the University of Liege, Belgium, and lead author of the new study published in Nature Astronomy.

“However, it had been theorized that this emission had existed on Mars for about 40 years, and, thanks to TGO, we have found it.”

Jean-Claude and his colleagues were able to identify this emission using a special TGO observation mode.

One of the orbiter’s advanced tool known as NOMAD (Nadir and Concealment for the Discovery of Mars) and which includes the Ultraviolet and Visible Spectrometer (UVIS), you can observe in various configurations, one of which places your instruments to point directly towards the Martian surface – also known as the “nadir canal.”

Previous observations had not captured any kind of green glow on Mars, so we decided to reorient the nadir UVIS channel to target the “edge” of Mars, similar to the perspective seen in images of Earth taken from the ISS, revealed co-author Ann Carine Vandaele of the Institut Royal d’Aéronomie Spatiale de Belgique and principal investigator of NOMAD.

Between April 24 and December 1, 2019, Jean-Claude, Ann Carine, and their colleagues used NOMAD-UVIS to scan altitudes ranging from 20 to 400 kilometers from the Martian surface twice per orbit.

When they analyzed these data sets, they found the green oxygen emission in all of them.

“The emission was strongest at an altitude of around 80 kilometers and varied depending on the changing distance between Mars and the Sun,” adds Vandaele.

Studying the glare of planetary atmospheres can provide scientists with a wealth of information about the composition and dynamics of an atmosphere and expose how energy is stored by sunlight and the solar wind, the stream of charged particles that emanate from our star.

Jean-Claude and his colleagues delved into how it formed to understand this green glow on Mars better and link it to what we see around our own planet.

“We modeled this emission and found that it is produced mainly as carbon dioxide, or CO2, and is divided into its constituent parts: carbon monoxide and oxygen,” says Jean-Claude. “We saw the resulting oxygen atoms glowing in both visible and ultraviolet light.”

Simultaneous comparison of these two types of emission revealed that the visible emission was 16.5 times more powerful than the ultraviolet. This led experts to assume that Mars’ measurements are consistent with previous theoretical models but not with the actual brightness that we have seen around the Earth, where the visible discharge is much weaker.

“This suggests that we have more to learn about how oxygen atoms behave, which is very important to our understanding of atomic and quantum physics,” revealed Jean-Claude.

Furthermore, this understanding is key to characterizing planetary atmospheres and related phenomena, such as auroras.

By explaining the structure and behavior of this bright green layer of Mars’ atmosphere, scientists can gain insight into an altitude range that has endured mostly unexplored and control how it evolves as the activity of the Sun varies. Mars makes its way along its orbit around the Sun.