Astronomers discovered a star whose brightness decreased and increased repeatedly.

An unusual star has been discovered in the central part of the Milky Way, the brightness of which either decreases or increases. Similar stars have been observed in the past, that become periodically eclipsed by large, opaque disks but star VVV-WIT-08 disappeared almost entirely. There is a possibility that this is a binary star system of a new type. According to the Monthly Notices of the Royal Astronomical Society, scientists have called it the “blinking giant.”

10 Things You Should Know About the “Blinking Giant”, a Possible New Type of Star

1. It all began with the fact that astronomers noticed that the brightness of the star VVV-WIT-08, located in the center of the Galaxy, at a distance of more than 25,000 light-years from us, decreased 30 times so that it almost disappeared from the sky.

2. Many stars in binary systems change their brightness or pulsate due to the fact that they are periodically obscured by a passing companion star.

3. The uniqueness of the VVV-WIT-08 was that it slowly faded over several months and then brightened again.

4. Astronomers believe that this “blinking giant” a new class of binary star systems, in which a giant star hundreds of times the size of the Sun is eclipsed every few decades by an invisible orbiting satellite – a smaller star or a large planet.

5. Since the star is located in the densest region of the Milky Way, the researchers initially suggested that an unknown dark object accidentally passes in front of the giant star.

6. However, simulations have shown that there must be an incredibly large number of coincidences to implement this scenario.

7. By the way, a similar star system has been known for a long time – the giant star Epsilon Auriga. It becomes partially eclipsed by a huge disk of dust every 27 years, but at this moment its brightness decreases only by half.

8. In fact, there are half a dozen known star systems where giant stars are periodically eclipsed by large, opaque disks. Here is a video presentation of one of the possible explanations about the “blinking giant” VVV-WIT-08.

9. Scientists have proposed to separate the giant “blinking” stars into a separate class for research. There certainly are different types of star systems that are yet to be discovered for the first time and the massive blinking star could be the first of its kind.

10. The “blinking giant” VVV-WIT-08 was detected with the VISTA telescope of the Paranal Observatory in Chile, operated by the European Southern Observatory. This telescope observed changes in the brightness of one billion stars over ten years in the infrared range and the discovery we have presented in this article focuses on just a single one of these stars. What else do you think astronomers will find in the data?

Rogue Star Spotted Flying Across Our Galaxy at 2 Million Mph 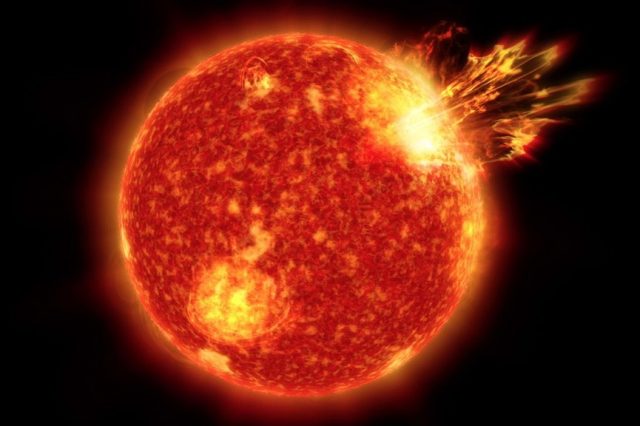