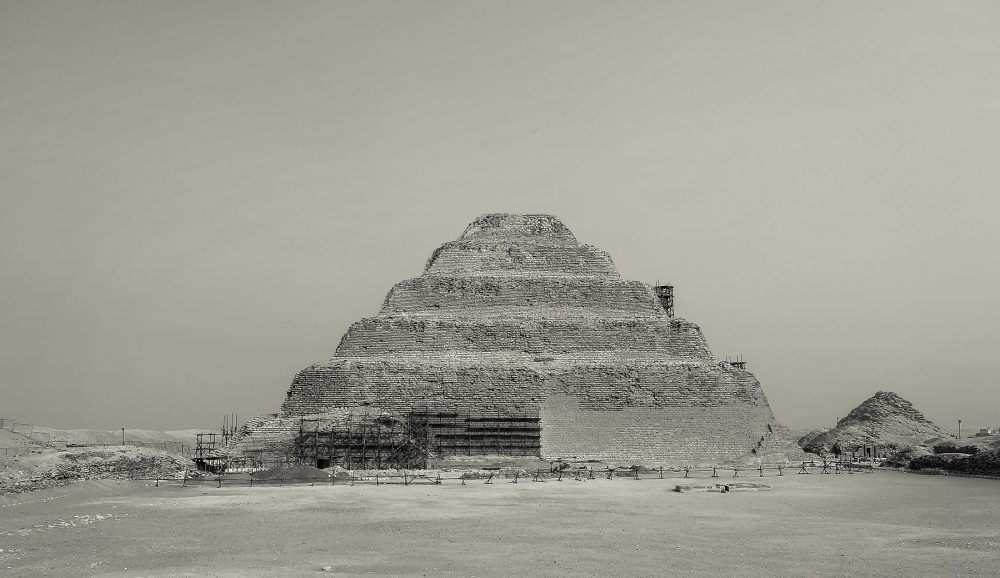 Some 4,700 years ago, before the first Pyramid of ancient Egypt was finished, the builders dug out more than 5.7 kilometers worth of tunnels, chambers, galleries and tunnels beneath the structure, creating a vast underground world.

The first pyramid built in Egypt is a true wonder on its own. Not only because up until then, the ancient Egyptians had never attempted to create such a structure, but because the pyramid and its pyramid complex marked a complete deviation of previous architectural elements in Egypt.

It was a history-changing structure that left a profound mark on the history of ancient Egypt. The pyramid complex—attributed to Pharaoh Djoser—was, until then, a construction process of an unseen scale. Yet curiously, despite its importance and weight, not one single ancient text has been found that mentions the planification or construction of the Pyramid at Saqqara.

Djoser’s pyramid revolutionized ancient Egypt. The pyramid complex, including the pyramid, temples, plazas, and statues, was an accomplishment unheard of until then. It is also indicative that during the Third Dynasty of ancient Egypt, the country was well developed. Both Upper and Lower Egypt had a fully functioning government that controlled both workforce and resources across the land.

The Pyramid which dominates the landscape at Saqqara, initially stood around 60 meters and was clad in polished white limestone. The Pyramid of Djoser—a proto pyramid—is also regarded as the earliest large-scale cut stone construction in Egypt. However, the nearby superstructure dubbed Gisr el-Mudir predates Djoser’s complex.

Gisr el-Mudir, also known as the Great Enclosure, is one of Egypt’s oldest known stone structures ever built. The structure is located not far from the Step Pyramid. Covering an area of 650 by 350 meters, the rectangular structure’s purpose remains unknown, as does its builder. However, Egyptologists argue that it may have been commissioned—although not finished—by Djoser’s predecessor, a Pharaoh called Khasekhemwy, who was the final king of the Second Dynasty of Egypt.

Djoser’s majestic step pyramid is fascinating because it marks the departure from previous, lesser forms of architecture. But, unfortunately, by the time the Pyramid complex of Djoser was completed (Djoser reigned long enough to allow his master plan to be realized within his lifetime), Egypt sailed into another, revolutionizing form of monument building.

The successful completion of the Pyramid complex, planned and constructed by his royal architect Imhotep, sets several important precedents. The most notorious is its status as the very first monumental structure made of stone. Revolutionary as it was, scholars note that the social implications of such a massive and carefully built stone structure are mindboggling. All of this would not have been possible had the Royal Government not had complete and unconditional control over both material and human resources.

The completion of such a behemoth project indicates that Egypt was a proposing country already in the Third Dynasty, capable of building, perhaps, even greater monumental buildings.

Despite the fact that Djoser and his architect introduced a new type of architecture, the Pyramid complex is different than later complexes that appeared across Egypt. Nonetheless, many elements persist, and the step pyramids would set the foundation for later pyramids, which were built by different pharaohs across the 4th, 5th, and 6th Dynasties.

It has been argued that had the Step pyramid of Djoser never been completed, the Great Pyramid of Giza may never have been constructed in the first place, or it may not have been built in such size.

The most relevant precedented, argue scholars, is a structure built at Saqqara, cataloged as mastaba 3038, believed to have been built around 2,700 BC. This curious structure was built almost accidentally as a pyramid had its builders not left one of its sides uncovered.

The anatomy of a Step Pyramid

Mastabas were built in ancient Egypt until the start of the Third Dynasty when history in Egypt transformed forever. With the arrival of King Djoser, many new developments were performed in Egypt, and architectural changes were the most famous. Although Djoser followed tradition and built a massive mastaba composed of mud-brick at Abydos, he would turn to Saqqara for unclear reasons and kick-start a building project that would forever remain present in history.

Djoser’s Step pyramid was most likely built in various stages. The structure progressed from an initial square mastaba to the final six-step pyramid we see today. As noted by Jean-Phillippe Lauer, the leading excavator of the pyramid complex, there were six stages: M1, M2, M3, P1, P1′ and P2.

If this theory is correct, it would mean that Imhotep made a significant expansion of the structure every three years. Therefore, if we divide the six stages into nineteen years, Djoser is believed to have ruled over the land of Egypt.

As the builders led by Imhotep started transforming the mastaba into the first Step Pyramid, they constructed a crude core of disproportionate stones, using a fine limestone casing and a layer of packing in between. This method is similar to the mastaba building, but this time there was one notorious difference: the builders decided to abandon horizontal beds and started building in accretions that leaned inwards.

The transformation of the mastaba into a step pyramid also saw builders use much larger and better blocks of stone that no longer needed to be packed with mortar of tafla.

The above-ground elements of Djoser’s Pyramid complex were revolutionary, refreshing, and massive. Once completed, the entire complex stood out and was visible from miles away. The Pyramid was finished off with finely polished limestone making it shine like a star.

But the above-ground elements of the pyramid complex are only part of a minor, minuscule part of the entire story.

Just as the above-ground elements were revolutionary, what lies beneath them is even more worthy of praise and admiration.

More than 4,700 years ago, somehow, and using no more than simple tools, no wheel, no pulley, sticks, and stones, the ancient builders of the pyramid complex excavated more than 5.7 kilometers worth of tunnels, and chambers, galleries, and magazines beneath the pyramid.

As far as Egyptologists, the only precedent to this massive project are the 2nd-dynasty royal underground galleries not far from the Djoser complex, to the south, one of which is believed to have belonged to Hotepsekhemwy. Archeologists have discovered that Djoser’s Western Galleries were aligned to Hotepsekhemwy’s, although Djoser’s were several orders of magnitude larger.

Beneath the pyramid, a central corridor and two parallel ones were built across 365 meters, connecting around 400 rooms. These impressive underground features surround one of the most complicated networks of tunnels and shafts the ancient Egyptians constructed ever below a pyramid. Not one pyramid after that of Djoser would include such a complex, awe-inspiring underground world.

As to why the ancients went through the scrupulous process to excavate around 5,7 kilometers worth of tunnels, chambers, shafts, galleries, and magazines, Egyptologists regularly accept that it was meant to be a representation of the King’s underground palace. Mark Lehner tells us that the entire underground network built under the pyramid is meant to evoke the watery associations of the Egyptian Netherworld.

Whatever the reason behind the superstructure beneath the pyramid, it would never be repeated in the hundreds of pyramids that were built following the Step Pyramid of Djoser. This is why the Pyramid complex of Djoser, both above and below the surface, represents one of the most underappreciated wonders of ancient Egyptian architecture and engineering.

Worthy of an ancient wonder of the world, the massive complex marks the only time such a massive pyramid complex was built above and below the surface.

It is generally accepted that Djoser’s mummy was placed within the burial chamber that was constructed below the surface, in the midst of the network of tunnels below his pyramid. But despite this, the mummy of King Djoser has never been discovered, just like the many mummies of Pharaohs like Sneferu, Khufu, Khafre, or Menkaure that succeeded Djoser.

Egyptologists claim that Djoser’s mummies, like that of Sneferu, Khufu, Khafre, and Menkaure, were stolen from inside the pyramids together with their treasures.

So, although the superstructure beneath the pyramid was worthy of a king, the Pharaoh’s mummy was not found in any of the 5.7 kilometers of rooms, chambers and, magazines. But what experts did find is a collection of around 40,000 ancient vessels. Interestingly, inscriptions on the artifacts revealed that most of them were not even intended for King Djoser but for his ancestors.

This tells us that the entire pyramid complex, as above so below the surface reveals a story far more complex than we’ve been led to believe.

Inside the intricate network of tunnels, archeologists did, however, find the remains of an 18-year-old female. Strangely, when experts analyzed the remains, they found that the woman dates back several generations before Djoser. So, what are her remains doing beneath the pyramid? Egyptologists argue that the remains of the 18-year-old female were brought from elsewhere and placed inside the subterranean network built beneath the pyramid.

Why did the builders build so many underground chambers and rooms beneath the pyramid? Were they all used for religious purposes? Why even build such a vast underground complex? What happened to the mummified remains of Pharaoh Djoser? Who exactly was the female whose hip bone was discovered beneath the Pyramid?

If Djoser built such a massive complex both above the ground as well as beneath the surface, why did not one Pharaoh that ruled over Egypt after Djoser build a complex of such magnitude?

Using what exact tools did the ancient builders excavate so much material from beneath the surface? What did they do with it? How was the Step Pyramid built? How were the stones transported?

Was it all done using a massive workforce like that of the Great Pyramid of Giza? And why have we not found one single document that describes or mentions how the Step Pyramid was built, and how its vast underground network of rooms was excavated? Why do we have so many enigmas when it comes to Ancient Egyptian Pyramids?