A freakishly large earthquake has caused the earth to split up a fissure that runs across the Desert in Southern California.

The scar is so big, that satellite images from Planet Labs identified the newly formed crack stretching across the Earth around 10 miles outside of Ridgecrest California.

Experts argue the massive fissure was created after the second of two powerful earthquakes rocked the state in less than 48 hours.

The second quake was registered with a magnitude of 7.1, which experts say is powerful enough to shake buildings, knock items off of shelves and walls, and create minor damage.

Before the 7.1 earthquakes, the Area was shaken by a 6.6 magnitude Earthquake on July 4. The earthquake was felt across the entire region after sending out reverberating aftershock miles out.

The damage is clear.

As noted by a KTLA report, the earthquake created fissures on the roads alongside highway Route 178 and has resulted in the collapse of at least one building in the region.

Thankfully, no injuries or fatalities have been reported.

We have now recorded over 3,000 earthquakes in the Searles Valley sequence.https://t.co/mgWpqYcUzB

The earthquakes, which were the result of strike-slip earthquakes, are among the most powerful quakes to hit the region in around 20 years.

Strike-slip earthquakes are vertical (or nearly vertical) fractures where the blocks have mostly moved horizontally. If the block opposite an observer looking across the fault moves to the right, the slip style is termed right lateral; if the block moves to the left, the motion is termed left lateral.

But the quakes shall not cease. According to seismologists, more earthquakes can be expected as they predict that more than 30,000 earthquakes above magnitude 1 will occur in the coming weeks, reports Science Alert.

But although tens of thousands of smaller earthquakes may occur in the coming weeks, according to the United States Geological Survey, the chances of a stronger earthquake occurring in the near future is less than one percent.

The sequence is decaying, and the decay rate is on the high side of average. So the probabilities of more aftershocks are dropping. In the next week, M4s are still certain, a couple of M5s are likely, but larger quakes are looking more improbable. https://t.co/1FlUWz3rl6

The town where the Earthquake originated from, Ridgecrest is known for its susceptibility to earthquakes in the past, although most of them have been of a much smaller scale.

Check out this fissure near the site of last night's magnitude 7.1 earthquake outside Ridgecrest. Sky5 was overhead late this morning. Full coverage at https://t.co/UH88UcfZm0 pic.twitter.com/ykTfKCr3Ao

‘For a while, Ridgecrest was known as the earthquake capital of the world cause it had so many small quakes. So, it’s not a surprise that the earthquake happened,’ Caltech seismologist Dr. Egill Hauksson told KTLA.

“These earthquakes, we’re lucky in that the energy in them is mostly going to the north, away from Los Angeles,” Hauksson added.

“If they were rupturing from north to south, then there would be more likelihood to have damage in say, Palmdale or other areas.” 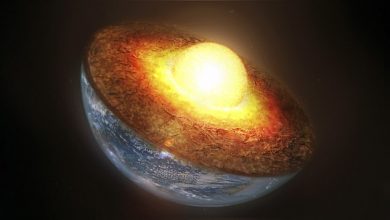 Scientists Find Evolution Can Be Reversible