When Will This Nonsense Stop? YouTube is saturated with time-traveling videos, conspiracies claiming ET’s smoke weed, while traveling past Earth, and end-of-time prophecies. And if that wasn’t enough, now a guy claims he traveled back in time and snapped an image of a dinosaur.

YouTube has been flooded with content that will make your brain hurt. Not because it’s so challenging and thought-provoking, but simply because it’s plain stupid.

Nonetheless, YouTube doesn’t seem to care much and doesn’t control that much what exactly gets posted onto their platform.

Earlier today, I was browsing YouTube casually until a video from a YouTube channel called ApexTV popped out. The title? Time Traveler Shares Image of Dinosaur.

Obviously, I clicked to see what kind of photograph the guy had!

Unsurprisingly, it was just what I expected, much info many, claims, but a whole lot of nothing.

Soon after, I came across a PLETHORA of articles and videos that apparently describe and present the same thing, over and over again.

Two articles published online caught my attention. One was posted by the Express, and the other one by Coast to Coast AM.

Both indicate how a guy who apparently has the ability to travel through time (although he doesn’t mention how), came back from the future and showed us an image of a dinosaur from the… wait for it… past.

Both articles tell us how a ‘self-proclaimed’ time traveler speaks of his story, in front of the camera, detailing his journey through time.

In one of the more recent videos (there are quite a few) the alleged time traveler even shows an image of a dinosaur, he claims he took in the past.

The anonymous man, who appears in the video with a blurred face, says he has been on a series of time traveling missions into the distant past.

Speaking to ApexTV (who are apparently a YouTube Channel that attracts time travelers) the time traveling-blurred-face guy explained that among his many missions, he saw, actual, living, and breathing dinosaurs up close.

In the video, he even presents viewers with an image of a dinosaur he says he snapped during the Cretaceous-Paleocene era. The photo, he proudly shows users in the video, is “proof” of a purple Tyrannosaurus Rex, walking on Earth some 66 million years ago.

He explains in the video that he doesn’t really know where he was exactly when he snapped the image. 👀

“I’m not exactly sure what the exact location was that I took the picture, however, I can say that it was in North America, what would be the modern Southwestern United States.”

He goes on to explain that the image is not all the evidence he has and that he has more convincing material.

“You will be actually shocked and my goal is to convince you that time travel is real and I have more evidence, in fact, that I could show in the future as well.”

So, how about that dinosaur image? I’m better at photoshop than this, and I can barely draw a circle in PS.

Maybe, it’s time that YouTube enforces better policies that will prevent brainless content from popping up. I guess scientists are right when they said that YouTube is to blame for allowing flat-earth conspiracy theories to spread around. 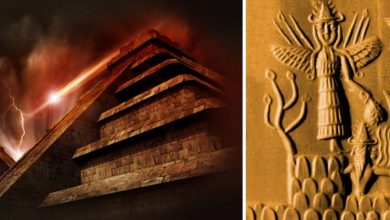 We Should Blame YouTube For Spreading ‘Flat Earth’ Conspiracy Theories

Why People Believe in Conspiracy Theories, Explained by Science