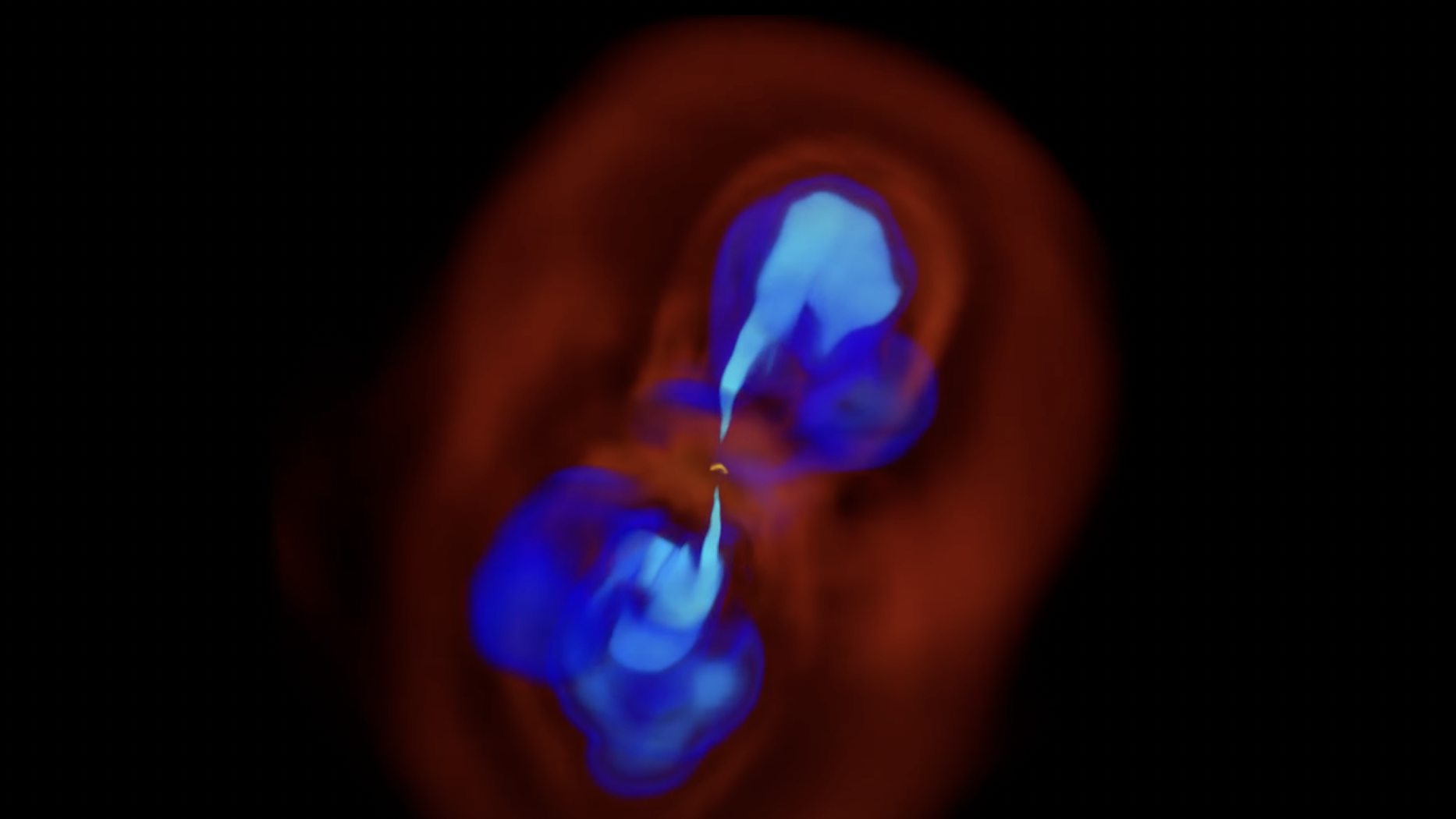 In less than 10% of the time, astronomers may encounter X-shaped radio galaxies with more than two jets.

In spite of its strangeness, our universe is incredibly beautiful. And it harbors more than spiral galaxies. There are galaxies with elliptical shapes as well as galaxies that are x-shaped or winged-shaped.

But these X-shaped galaxies were exotic and rare, and not much was known about their formation. New 3D models provide insight into how these X-shaped astronomical objects form. Using radio telescopes, astronomers can see how supermassive black holes in elliptical galaxies shoot their twin jets of radiation out of either side.

In rare cases, however – less than 10% of the time – astronomers may encounter X-shaped radio galaxies with more than two jets.

For decades, astronomers have been puzzled by these mysterious objects. The formation of these structures may be surprisingly straightforward, according to new research coming out of Northwestern University. Researchers have used galaxy accretion simulations to track gas that extends far from a supermassive black hole for the first time.

According to Northwestern astrophysicists, only simple conditions are needed to fuel an X-shaped galaxy’s supermassive black hole.

It was discovered that the black hole’s characteristic X-shape is caused by the interactions between its jets and its falling gases. Radiation blasts are activated and turned off as infalling gas deflects newly formed jets. Jets eventually penetrate along a single axis, overcoming the gas.

(Click here if the above video does not show)

“A popular explanation of X-shaped radio galaxies is that two galaxies collide, causing their supermassive black holes to merge, which changes the spin of the remnant black hole and the direction of the jet.”

According to another theory, the jet’s shape may be altered as it interacts with large quantities of gas surrounding a supermassive black hole.

“Now, we have revealed, for the first time, that X-shaped radio galaxies can, in fact, be formed in a much simpler way,” Lalakos explained.

Despite this, Lalakos never intended to simulate an X-shaped galaxy. Instead, his experiment aimed to measure the amount of mass drawn into a black hole using simple inputs. Assistant Professor Sasha Tchekhovskoy, a coauthor of the paper, responded enthusiastically to Lalakos’ discovery, even though he initially did not see the significance of the X-shape that his simulation produced.

“He said, ‘Dude, this is very important! This is an X-shape!’” Lalakos recalls. “He told me that astronomers have observed this in real life and didn’t know how they formed. We created it in a way that no one had even speculated before.”

This iconic X-shape was created organically by Lalakos’s model, where previous simulations failed.

Lalakos explains that in his simulation, he tried not to make any assumptions.

“Usually, researchers put a black hole in the middle of a simulation grid and place a large, already-formed gaseous disk around it, and then they may add ambient gas outside the disk.”

“I made the simplest assumptions possible, so the whole outcome was a surprise. This is the first time anyone has seen X-shaped morphology in simulations from very simple initial conditions.”

Despite their rarity, Lalakos believes these galaxies could actually be more common in the universe than they seem. However, they would only survive for a short period of time.

The black hole might generate them every time it gets new gas and starts eating again, says Lalakos.

“So they might frequently be happening, but we might not be lucky enough to see them because they only happen for as long as the power of the jet is too weak to push the gas away.”

It is impossible to look at what’s happening near a black hole from the center of the universe, Lalakos says. So most of the time, we use simulations to understand what happens.

The unexpected discoveries are published in the Astrophysical Journal Letters.