Some 66 million years ago, Antarctica was a different place. Instead of Ice, lush forests covered most of its surface, and the icy desert we see today was inhabited by countless ancient species, most of which are entirely gone now. During a period known as the Cretaceous, a massive ancient reptile laid a football-sized egg.

Although the egg contents are long gone, its fossilized soft shell survived to tell the story.

According to experts, the egg was likely laid by a giant marine reptile known as a mosasaur.

“It is most similar to the eggs of lizards and snakes, but it is from a truly giant relative of these animals.”

“It is from an animal the size of a large dinosaur, but it is completely unlike a dinosaur egg,” explained lead author Lucas Legendre, a postdoctoral researcher at the University of Texas Austin’s Jackson School of Geosciences,” in a statement.

The existence of the fossilized eggs helps us better understand Antarctica and the animals called it home during the Cretaceous. Previously, scientists believed that gigantic marine reptiles were not capable of laying eggs. However, the recently found fossilized softshell in Antarctica redefines our understanding of Antarctica’s ancient inhabitants since “nothing like this has ever been discovered.”

Although the discovery has made headlines recently, the fossilized shell was discovered nearly ten years ago. It remained unlabeled and forgotten in the Chilean National Museum of Natural History, and experts referred to the nearly 30-centimeters stone-like fossil as “the thing.” 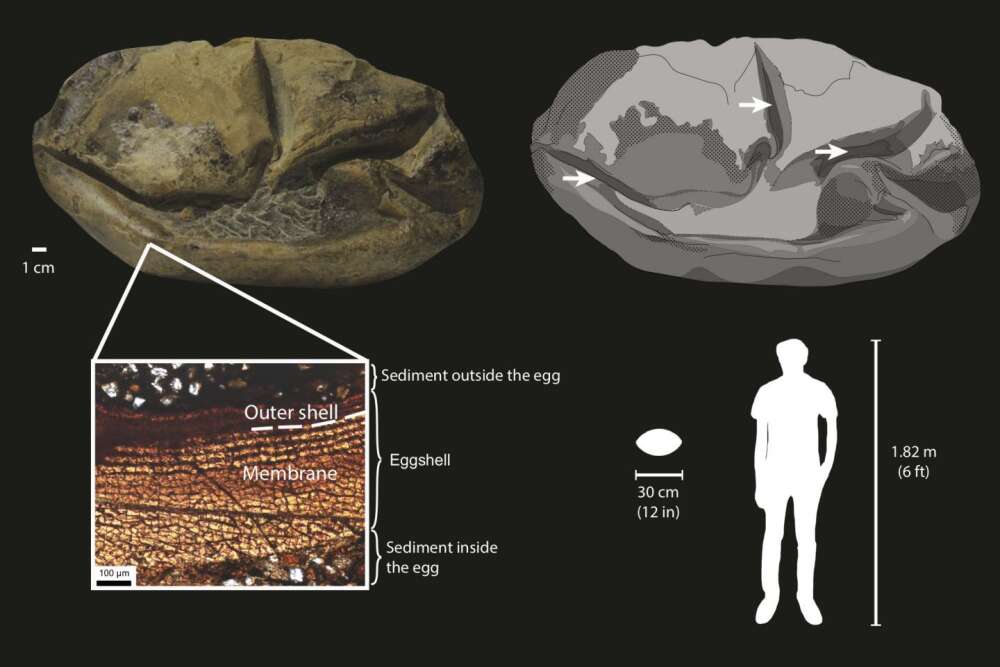 An illustration showing the fossilized egg, its parts, and the relative size compared to a human. Image Credit: Legendre et al. (2020).

Eventually, the fossilized “thing” reignited the interest of scientists who decided to study it closer. They pierced through the egg’s ancient membranes with state-of-the-art microscopes and determined it was, in fact, an egg. The scientists only then understood that the visibly collapsed and folded fossilized “thing” was part of one of the largest eggs that have even been described in Antarctica.

It is only second to the elephant bird’s egg, laid by elephant birds, large flightless birds that once lived on Madagascar. It is believed that these creatures became extinct sometime around 1000–1200 CE, probably as a result of human activity.

An egg resembling those of reptiles

The Antarctic egg seems to resemble the eggs laid by reptiles such as lizards and snakes, which suggests that the egg develops inside the mother, hatching immediately after being laid.

“Such a large egg with a relatively thin eggshell may reflect derived constraints associated with body shape, reproductive investment linked with gigantism, and lepidosaurian viviparity, in which a ‘vestigial’ egg is laid and hatches immediately,” write the study authors in Nature.

The egg analyzed by experts is believed to have hatched tens of millions of years ago, so whatever hatched from it is long gone by now. Knowing what laid the egg with certainty is difficult, but to better understand it, researchers compared some 259 living reptiles to see what the fossilized egg bears a resemblance to.

By comparing the egg and different body types of reptiles, the researchers concluded that the animal that laid the egg measured 6 meters from one end to the other, not including the creature’s tail.

Hi, my name is Ivan and I am the founder of Curiosmos, Ancient Code and Pyramidomania. I've been writing passionately about ancient civilizations, history, alien life and various other subjects for more than eight years. You may have seen me appear on Discovery Channel's What On Earth series, History Channel's Ancient Aliens, and Gaia's Ancient Civilizations among others.
Get our content delivered to your email. Don't worry, we don't send spam.
10 We Picked Today
Facebook Twitter WhatsApp Telegram Viber
Back to top button
Close
Latest Titles
Categories