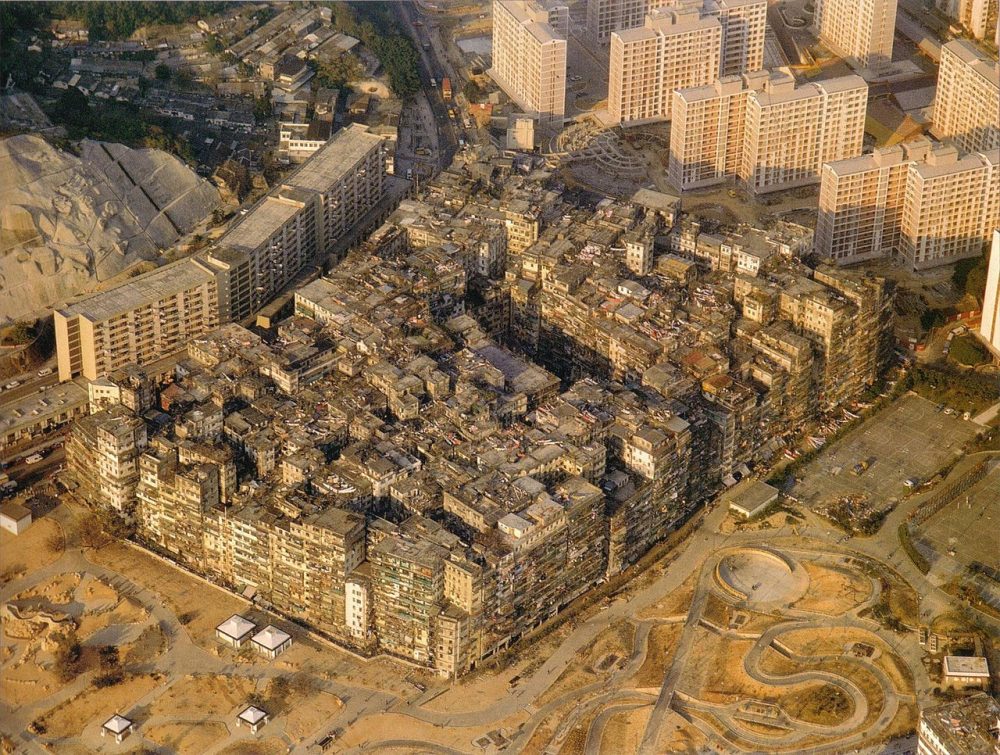 Have you heard the story of the architectural marvel known as the Kowloon Walled City?

Destroyed 27 years ago, the Kowloon Walled City still attracts attention with its incredible story, in which reality manages to surpass the imagination. The city was located on an area of ​​213 meters by 126 meters and was home to more than 33 thousand people, making it the most densely populated place in the world. Known for its misery, filth, and impossible living conditions, Kowloon was known as the City of Darkness, where no laws applied.

1. Founded in Hong Kong in 1810 as a fortress city, it has repeatedly been held hostage to the complex relationship between China and the British Empire. Since 1898, Kowloon (also called the Walled City) remained a Chinese land, surrounded by Hong Kong territories under British jurisdiction.

2. Gradually, the place began to develop and more and more people settled in. The location was appealing due to the fact that after the Second World War, China and Great Britain had neither the strength nor the desire to impose their influence on the Walled City. It became home to refugees from the Chinese regime who could not afford to live in Hong Kong.

Uncontrolled construction began on the existing buildings in Kowloon. The distance between the buildings rising to 14 floors was not more than 2 m, which turned the streets into labyrinths without sunlight, through which people pass bent due to hanging bundles of cables.

3. By 1990, there were 500 buildings in the city. There were only two elevators and many “bridges” between the upper floors. Thanks to them, the occupants did not have to go down to the first floor to go to a neighboring building.

Kowloon was being built on the move, without a plan and rules, the premises had no windows and no ventilation system. This architectural marvel, contrary to any logic, still arouses the interest and wonder of architects and builders. The apartments were between 4 sq.m. and 16 sq.m. and served simultaneously as working places.

4. In these “factory apartments”, families managed to house a shop, a weaving factory, a workshop for noodles, candies, plastic, or to organize the production of ready-made foods such as fried fish balls and roast meat.

5. Access to water was difficult. There were only eight supply pipes available (one within the city, the seven outside it), serving about 33,000 residents and hundreds of factories and workshops.

Residents of ground-floor homes dug wells in their properties to have access to water. Hygiene was a challenge that people failed to cope with, coexisting with rats and cockroaches.

Electricity was the other big problem as production required a lot of electricity. Not to mention normal life as a whole.

6. The biggest luxury available for a minimum number of people were balconies overlooking the open space outside the city. Roofs were the only place where residents could go out in the sun, for children to play or even write their homework. But outdoor holidaymakers were exposed to the loud noise of landing planes at the Hong Kong airport, whose corridor ran just above the city.

7. Heavy working and living conditions were the price residents had to pay to take care of their families. Not all children went to school, some helped their parents earn a living, others were raised by their grandmothers or stayed home alone until the adults return home. The city has only one crèche, and the children in it ate and slept in shifts due to insufficient space.

But on the other hand, there were many dental offices in Kowloon because, unlike in Hong Kong, dentists in Walled City did not need a dental license.

The medical and health services did not take action against unregistered dentists and doctors, they even believed that they should continue to tolerate them, except in cases where there is a danger to the lives of patients. The low prices of health services made health services in the Kowloon Walled City preferred especially to those living outside the city.

8. Restaurants were offering dog meat dishes, opium smoking rooms, access to heroin, gambling, prostitution. Real power was in the hands of triads (Chinese criminal organizations) that controlled criminal activity. And although police patrolled the City of Darkness on a daily basis, they only intervened in serious crimes and cooperated with triads for the rest.

9. In the last years before the destruction of Kowloon, crime and the number of drug addicts filling its streets had dropped dramatically. Some evidence suggests that at the time, triads controlled primarily the water supply, which remained the most indispensable resource for residents. There was no lack of social activities, there were small schools, clinics, churches, and even a center for the elderly.

10. With the signing of the Sino-British Joint Declaration in 1984, China regained Hong Kong. The first steps were being taken to resolve the issue with the status of the Kowloon Walled City. Three years later, the two sides agreed to demolish the city and allow residents to receive monetary compensation.

Surprisingly, most of them refused to leave as life outside the Walled City was much more expensive. Some doubted that they will be able to feed their families if they have to comply with the regulations valid for Hong Kong.

Despite protests and refusals to leave their homes, the last remaining people were evicted by 1992, and the City of Darkness was finally destroyed in April 1994.

In just one year, a spacious park with lots of greenery was built in its place. There you can see artifacts from the fortress, and the alleys bear the names of the streets and ruined buildings of the former city.