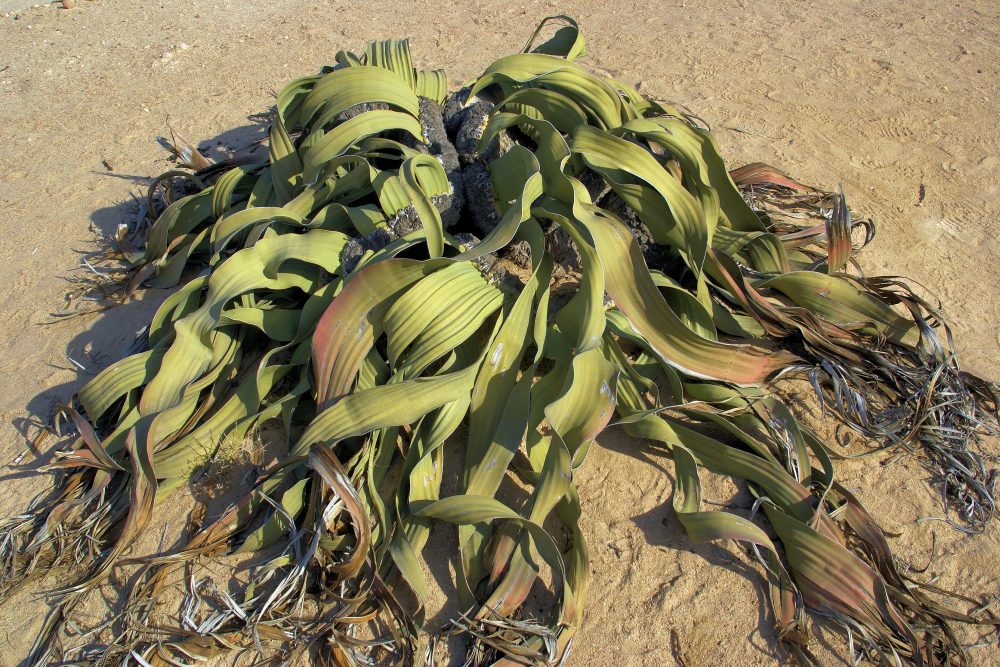 A plant that can survive for thousands of years in the harshest environmental conditions on Earth.

An international team of scientists found out that the African Welwitschia plant can live for more than a thousand years thanks to the disposal of genetic debris and a special way of growing leaves.

They hope that the genetic secrets of Welwitschia will be useful in agriculture – in a changing climate, it is important to create plants that can survive in an arid and nutrient-poor environment.

Everything you need to know about the Welwitschia plant

Welwitschia is a fascinating plant that has not only adapted to survive in one of the harshest places on planet Earth – the Namib Desert but can also survive for thousands of years.

The difference between the Welwitschia plant and most other plants is its ability to continue developing and adapting. While most species stop developing once fully grown, Welwitschia is exactly the other way around. Curiously, it actually dies once it stops growing.

In previous studies, scientists found that a single specimen of Welwitschia is more than 2,000 years old. Some botanists believe that some specimens might be more than 3,000 years old as well. For this incredible period, the plants do not change a single leaf, and in fact, the plants have only two massive leaves during its entire lifetime.

Yes, the winds and sandstorms normally cut the two plants longitudinally, in many stripes, which causes the impression of many leaves. Studies by botanists have proven, however, that each plant has only two leaves.

Welwitschia is an endemic plant – it can be found only in the Namib Desert. Friedrich Welwitsch found it here, not in the Kalahari, as most books say. Namib is a strange desert. Precipitation is low – about 25 – 50 mm per year, but the humidity is high, as thick fog invades from the ocean.

The journal Nature Communications published a study where scientists talked about some of the secrets of genetics that determine the unique form of Velvichia, its longevity, and resistance to environmental conditions. Specifically, researchers have discovered certain genetics that controls the growth and metabolism of cells. They found that the reason behind the impressive adaptation skills of the Welwitschia plant were genome changes that have been occurring over tenths millions of years.

Scientists claim that the genome shows that the plant is in an arid and nutrient-poor environment. Also, the history of its genome is quite consistent with the history of the desert which means that it has been adapting to environmental changes over and over.

Sudden changes about 86 million years ago

Scientists also found that that Welwitschia’s genome underwent sudden changes about 86 million years ago during an extreme drought in the region. This is when an “error” occurred in the cell division – the plant’s genome doubled.

Although a duplicated gene is typically devoid of its original functions and has completely new ones, there is also a downside to this “evolution”. Logically, a larger genome also means higher energy consumption which would typically be fatal in such harsh environments.

Welwitschia, however, found another way to suppress these high-cost requirements. Since a large percentage of its “new” genome happened to be self-replicating “junk”, the plant managed to suppress the unnecessary DNA sequences. The process is known as DNA methylation and because of it, Welwitschia can survive in the Namib Desert.