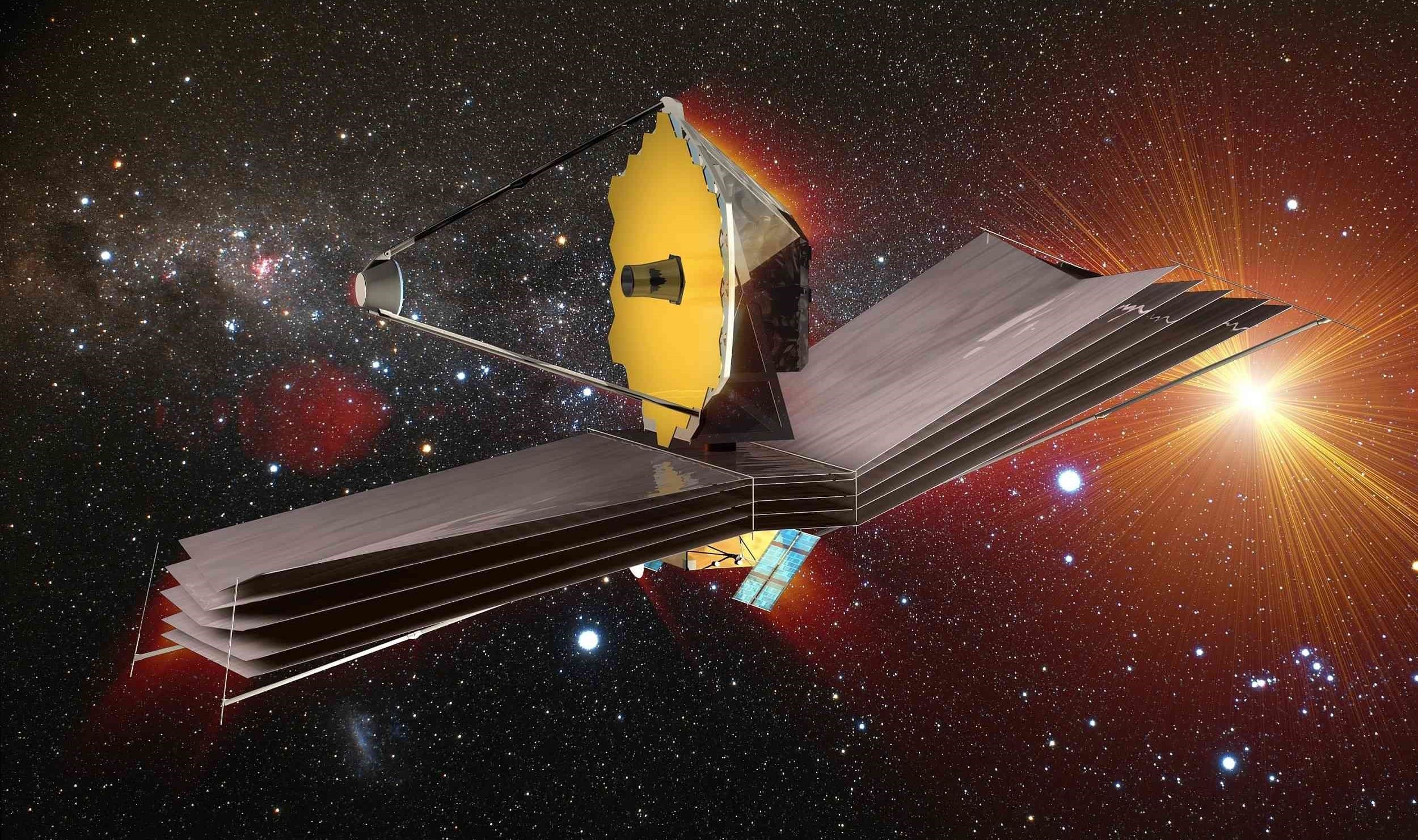 Twenty-five years after development began, the James Webb telescope has finally arrived to the second Lagrange point in the Sun-Earth System, where it will conduct the most advanced observations to date. It will study the processes that occurred in the early Universe, the evolution of galaxies from the Big Bang to the present, explore exoplanets and their atmospheres, and more.

Initially, the telescope bore the short but difficult to pronounce name NGST (Next Generation Space Telescope). In honor of Webb, who ran NASA in the 60s of the last century, it was renamed in 2002. It was estimated that the total cost of NGST will be $ 500 million, and it will go into space in 2007.

However, in 2005, the project was seriously revised, as well as the estimate: the price increased nine times, to 4.5 billion, and the European and Canadian space agencies joined the development. The project has been repeatedly criticized for ineffective management, for underestimating the complexity and time costs.

Since 2010, the James Webb, which had risen in price, began to eat off the budgets of other NASA projects – for example, the WFIRST telescope – and received the nickname “telescope that ate astronomy” from the journal Nature. By 2021, its total value had grown to nearly $10 billion.

Completion and launch were postponed 14 times

At the same time, as more and more money disappeared in the womb of the project, the launch date was transferred and rescheduled – it was shifted as much as 14 times. The most resonant transfer occurred in 2018 – then the expert committee for the development and testing of the telescope revealed a whole bunch of problems.

For example, there were valves damaged by an incorrectly selected cleaning solvent, incorrect wiring, and poorly installed heat shield fasteners – some of them came off right during vibration tests. And, of course, in 2020, “Webb” was among hundreds of scientific projects, whose deadlines “went” due to the coronavirus pandemic.

Fortunately, in the end, all the problems of the space telescope were finally solved. The construction, which was attended by contractors from 20 countries, was completed in 2019 – after almost two more years the telescope passed all kinds of tests. In October 2021, the observatory was transported across the ocean to French Guiana at the European Kourou cosmodrome and began to prepare for the launch.

It is better than all ground-based telescopes

There are ground-based telescopes that can try to compete with “James Webb” in vigilance. VLT, Keck Observatory, GTC are already working, ELT and GMT are preparing to enter service.

However, even the most advanced adaptive optics systems are able to correct atmospheric interference only for small areas of the sky near the reference stars, which makes observations with a large field of view inferior in detail to space telescopes.

In addition, in the infrared range, ground-based telescopes are much inferior to space ones: water vapor in the atmosphere absorbs part of the radiation.

The main mirror of the observatory is a unique optical system. It is six times larger than that of the Hubble (its area is 27 square meters), and at the same time, it is lighter by almost a third – 625 kilograms against almost one ton. This is because beryllium was not used as the main material for mirrors in the past, but beryllium is a very light and durable material, which also has a lower coefficient of thermal expansion compared to glass.

Many parts of supersonic aircraft are made from beryllium alloys, and it has already been tested as a material for a mirror on the Spitzer and IRAS telescopes. The mirror blanks have been tested for resistance to micrometeoroid bombardment, which has shown that they are able to withstand them.

The preforms were obtained by pressing beryllium powder in stainless steel molds. They were then finalized, sanded, and polished. Then each of the mirrors was covered with a thin layer of gold by the method of vapor-phase deposition in a vacuum: the thickness of the gold coating is one hundred nanometers, and in total, the observatory took 48.25 grams of pure gold, which is comparable to the mass of a golf ball.

Gold was not chosen by chance – it better reflects infrared radiation and the long-wavelength part of optical radiation. The gold plating is coated with a thin layer of amorphous silicon dioxide to protect it from scratches. The main mirror was completed in 2016.

The mirror consists of 18 foldable segments

If the James Webb mirror was monolithic, then it simply would not fit under the launch vehicle fairing, so it was made segmented. It consists of 18 segments, each weighing 20 kilograms. The two side sections of the mirror, each of three segments, fold down to fit into the rocket.

The hexagonal shape of the segments makes it possible to obtain a mirror of an approximately round shape, 6.5 meters in diameter, without gaps (it was originally planned that the main mirror would be 8 meters long, but this idea was abandoned when the project was revised). The segments are controlled by 126 small motors.

There are four scientific instruments onboard

The halo orbit around the second Lagrange point in the Sun-Earth system, located 1.5 million kilometers from Earth, is an ideal place for a telescope, which must be cooled to low temperatures. In low-earth orbit, it would need huge reserves of coolant, but in a halo orbit, only a supply of helium for the MIRI instrument will be enough, and the rest of the systems will cool down by themselves – due to radiation.

In addition, near L2, the observatory will be able to hide with a heat shield from the Sun, Earth, and Moon at the same time. At the same time, James Webb requires relatively little fuel to stay in orbit.

When will James Webb begin operation?

In total, the flight to the second Lagrange point will take 29 days. During the first week of flight, the telescope will deploy all layers of the heat shield and extend a two-meter support tower that separates the optical system from the main body of the observatory. For the second week, the telescope will deploy the optical system so that it gradually begins to cool down to operating temperatures.

When James Webb arrives at his desk, it will begin a three-month optical alignment procedure. After that, it will take two months to calibrate the scientific instruments. And only six months after the launch, the telescope will receive the first full scientific data. So the first shots will have to wait.

• Find the first galaxies and stars formed after the Big Bang
• Determine how galaxies have evolved from their formation to the present
• Explore the formation of stars and planetary systems around them
• Study the physical and chemical properties of exoplanets and their atmospheres, including in terms of potential habitability

James Webb has a catalog of ‘first targets’

The list of the first targets contains 286 applications, which in total will take about six thousand hours of the observational time of the telescope. It includes already discovered exoplanets, discs around young stars, very distant galaxies, quasars and protoclusters, galaxies in the Local Universe, objects of the solar system such as comets, asteroids, trans-Neptunian objects, centaurs, and ice giants, as well as stars and nebulae of the Milky Way and its satellite galaxies.

The telescope will “look into the past”

Yes. Due to the finiteness of the speed of light, we can see the processes that took place in the Universe millions and billions of years ago, observing very distant objects. The observatory should consider the very first signs of star formation, which began 100-250 million years after the Big Bang, as well as the first stars and galaxies that existed in the era of Reionization, including quasars containing active supermassive black holes. Thus, it will be possible to test the evolutionary models of galaxies.

James Webb will begin a new era in Exoplanet exploration

The telescope will be able to directly register radiation from Jupiter-like exoplanets from the stars closest to us, as well as to detect exoplanets by the transit method (at the moment they intersect the disk of their stars). In this case, the sensitivity of the telescope will make it possible to determine even the approximate composition of their atmosphere from the transmission spectra.

In particular, the data from James Webb will be enough to understand whether there is water vapor, carbon dioxide, isoprene, and methane in the atmosphere of a particular exoplanet, which may indicate the possibility of life there.

The new telescope will also pay attention to the protoplanetary disks around young stars and the star-forming region. Thus, using Webb’s data, it will be possible to trace the formation of both stars and planets around them.

What about Solar System studies?

James Webb will observe all bodies in the solar system that are farther from the sun than the earth. These are comets, trans-Neptunian objects, dwarf planets, asteroids, as well as Mars, Jupiter, Saturn, Uranus, Neptune, and satellites of gas giants such as Enceladus or Europa.

The observatory will observe gravitational lenses, which can be played by galaxies and galaxy clusters, which makes it possible to estimate their mass and the proportion of dark matter in them. In addition, James Webb will record very distant supernova explosions, which will make it possible to clarify the rate of expansion of the Universe at different times of its existence.

The telescope should work for at least five and a half years, and 10 years after launch, its fuel reserves will come to an end, which means it will lose the ability to maintain a stable halo orbit around the Lagrange point.

What will happen to the telescope afterward has not yet been determined, but it can, for example, be put into a heliocentric orbit, where it will remain forever in a disabled state, as was the case with the Herschel infrared telescope. At the same time, astronomers hope that the technical condition of the Hubble will allow the two telescopes to work together for at least several years.