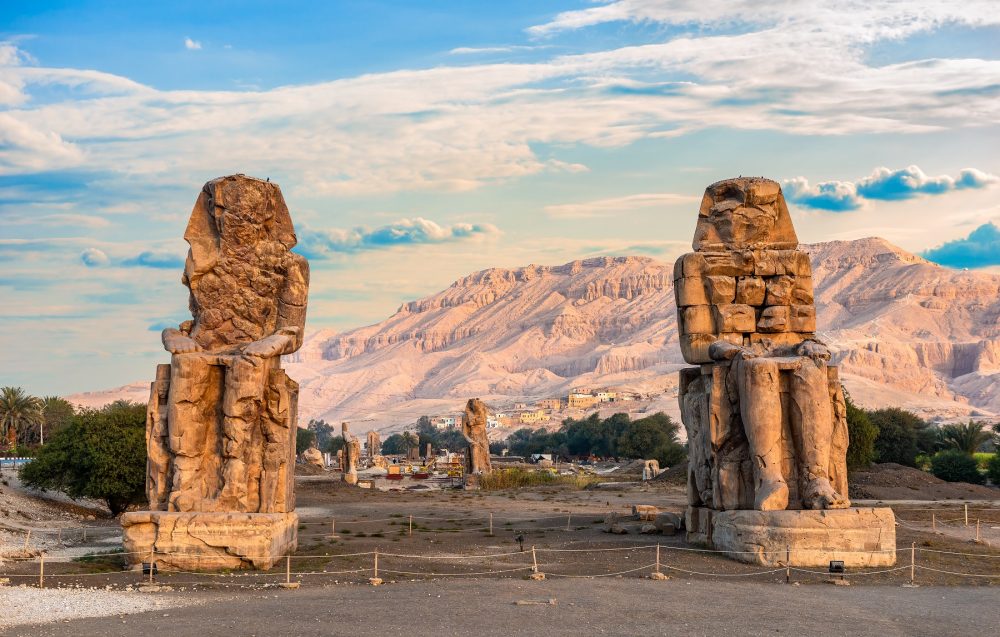 Each of the massive statues weigh 720 tons.

The two monumental stone statues of Pharaoh Amenhotep III who reigned in the Egyptian 18th dynasty, also known as Colossi of Memnon, are located in the west of Luxor opposite the Nile River. Each of the 18m high stone statues weighs 720 tons and portrays the seated king on his throne with the image of the ancient Egyptian god Hapy and other engraved symbols.

While the history behind the massive statues is a rich one, we’ve resumed it in a series of fifteen things you should know.

The two representations of Amenhotep III were named after the Ethiopian King Memnon whom Achilles killed in a battle. Because his name represented courage which he showed in battle, his statues were named Colossi of Memnon. This was consequent upon the gathering of the parts of the statue in 27 BC after destruction by earthquakes.

Greek mythology believed that Memnon was the son of the goddess of Dawn Eos. It’s been explained that the sounds emanating from the crevices of the statues were similar to Memnon crying. This is one of the phenomenal tourist attractions the statues have to offer, with their magnificent size being another.

The Colossi of Memnon were constructed as the gate to the huge mortuary complex of Amenhotep II. Unfortunately, floods, earthquakes, and other natural occurrences destroyed the entire complex. This is coupled with the fact that the Ancient Egyptians converted part of the monumental complex into other attractions.

The Guardian of the Amenhotep III Temple is presumably the role of the Colossi of Memnon. Their “mission” was to guard the pharaoh’s temple against evil. It is interesting to know that after the destruction of the temple by earthquakes, the Colossi of Memnon remained standing for thousands of years.

At twelve years old, the Pharoah Amenhotep II ascended the throne of Egypt and amassed great wealth for ancient Egypt which prospered in his reign. He maintained the tradition handed down to him. He built many great buildings and monuments comprising 250 structures, stele, temples, and statuaries. He expressed his interest in the arts and construction of projects. Among his major achievements was the mortuary complex of temples, and the Colossi of Memnon.

The complex of Amenhotep III was supposed to be more impressive and inspiring than any other ancient structure including the Great Karnak Temples. In ancient times, it spanned 86 acres including halls, porticos, plateaus, rooms, etc which represented reeds, a kind of Egyptian paradise.

The Colossi of Memnon were etched from a distinct block of quartzite sandstone. How the stone statues were quarried, carved, and transported remained an ancient mystery although some writers have put forth theories that the massive blocks of stone were transported and positioned in a similar way as the stones used in the construction of the pyramids of Giza.

Two shorter figures were carved into the front throne alongside the legs of the king: these belong to wife Tiye and mother Mutemwiya. The side panels depict the Nile god Hapi. The figures of Tiye and Mutemwiya were not just ornamental designs. They served a purpose according to the Egyptian belief. Mortuary statues in tombs are deemed abode of the souls of the dead when it visits the earth and needed to provide drink and food offerings. Thus, the Colossi do not just signify a mere stone image.

Descriptions of the singing statues were first reported by Greek historian Strabo as sounds which were later referred to as singing. Strabo believed that the sound was caused by dew drying inside crevices of the statues and the rock kept responding to the oncoming heat of the morning after a cool night. Strabo thought that similar sounds could be heard from road guard rails.

The damage done to the Colossi of Memnon significantly affected its veneration. While many repairs done on the stone statues helped to save them from collapse, its popularity waned. Because there was no more incredible oracle to answer questions, people turned to other places in search of answers to their prayers.

Amenhotep III inherited great wealth from his father Thutmose IV. Amenhotep lived when Egypt was a nation of wealth and international power. The stable empire and prosperity he inherited from his father helped him to ascend to the throne at 12 years old, and marry Tiye during her eleventh birthday. Tiye was named the Great Royal Wife and representation of great power.

Amenhotep III’s vision of kingship was opulence and grandeur. With all the 250 buildings attributed to him, his favorite palace at Malkata, west bank of the Nile River close to Thebes, spanned over 30 hectares. The expanse of land accommodated audience chambers, a throne room, conference rooms, roomy apartments, libraries, festival hall, storerooms, gardens, as well as temples to the gods.

The statues depict King Amenhotep III in a seated position with the hands placed on the knees, facing eastwards towards the River Nile

Amenhotep III had ingenious mastery of diplomacy. He often placed countries under his palm by offering them generous gifts with which he used to bend them to do his bidding. He also enjoyed great relationships with kings that benefited from Egypt’s kingly treasures. He was also reputed for protecting the dignity and honor of Egyptian women by denying foreign rulers access to the women because he claimed no daughter of Egypt had been given out and none would be given in his time.

Paramount in the political ideals of Amenhotep III was the preservation of his father’s policies and religion. He loved and supported the Egyptian ancient religion. This is evident in his massive structures especially the Colossi of Memnon which inspired great awe till this day