Numerous ancient writers including Herodotus and Lamblichus wrote about multi-leveled underground cities beneath the Pyramids and surrounding areas.

Egypt is the land of Pharaohs and Pyramids. Since time immemorial, Egypt’s lands have been the subject of awe, inspiration, and surprise. Thousands of years ago, Egypt was already a land where the impossible became possible. The ancient culture built massive pyramids, intricate labyrinths, and processed stones weighing hundreds of tons without modern tools.

The ancient Egyptians made the impossible, possible, making sure to remain present in the analogs of history, archeology, architecture, and engineering for millennia to come.

And while we have stood in amazement while exploring the lands of Egypt, have we ever wondered about what else remains hidden beneath the surface?

Many scholars argue that exploring the secrets hidden beneath Egypt’s sand is nearly impossible.

For thousands of years, the golden dunes have faithfully kept Egypt’s secret safe. Only to a few have some of them been revealed.

One such secret, suggest ancient writings, is a city beneath the pyramids and the surrounding areas.

At the Giza plateau, where the Pyramids stand proud and the Sphinx stands guard, is an entirely unexplored world beneath the surface.

Some argue that the underground secrets predate the very first Egyptian Pharaoh and the pyramids themselves.

Before unraveling the secrets of Giza, we travel to the Faiyum Oasis immediately to the west of the Nile south of Cairo in Egypt.

There, Herodotus, an ancient Greek historian, described ‘an endless wonder.’

He is widely considered to have been the first writer to have treated historical subjects using a method of systematic investigation—specifically, by collecting his materials and then critically arranging them into historiographic narratives.

Herodotus described an impressive Labyrinth said to have contained as many as 1,500 rooms and an equal number of subterranean chambers heavily guarded and inaccessible to ordinary people.

Herodotus wrote about the mysterious labyrinth:

“There I saw twelve palaces regularly disposed, which had communication with each other, interspersed with terraces and arranged around twelve halls. It is hard to believe they are the work of man, The walls are covered with carved figures, and each court is exquisitely built of white marble and surrounded by a colonnade. Near the corner where the labyrinth ends, there is a pyramid, two hundred and forty feet in height, with great carved figures of animals on it and an underground passage by which it can be entered. I was told very credibly that underground chambers and passages connected this pyramid with the pyramids at Memphis.” 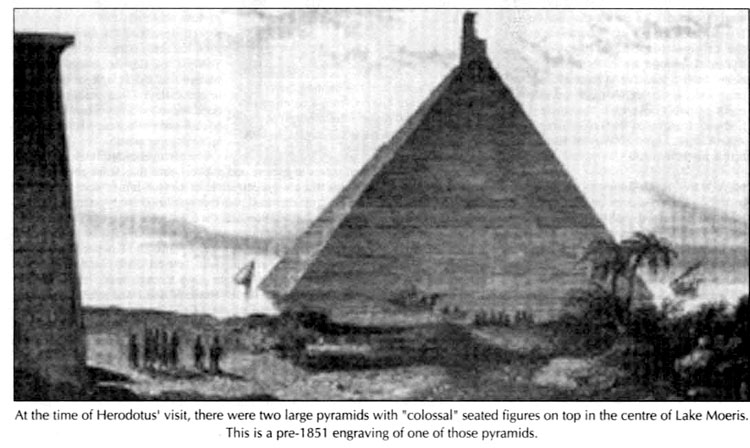 But in addition to that, the Greek historian also spoke of a multi-level megalithic metropolis located directly under Giza, said to be more than 15,000 years old.

And he wasn’t alone.

Many other writers supported what Herodotus had written.

One of them was Iamblichus Chalcidensis, or Iamblichus of Apamea, a Syrian Neoplatonist philosopher who recorded in ancient times unprecedented information about an entrance into the Great Pyramid of Giza, leading directly from inside the body of the Sphinx.

“This entrance obstructed in our day by sands and rubbish may still be traced between the forelegs of the crouched colossus. It was formerly closed by a bronze gate whose secret spring could be operated only by the Magi. It was guarded by public respect, and a sort of religious fear maintained its inviolability better than armed protection would have done. In the belly of the Sphinx were cut-out galleries leading to the subterranean part of the Great Pyramid.”

Iamblichus further explained that the historic galleries were artfully decorated along their course towards the Pyramid. If one were to travel into the passages without a guide, you’d inevitably returned to the starting point.

Another Greek philosopher named Crantor of the Old Academy, probably born around the middle of the 4th century BC, supported the writings made by Herodotus.

Furthermore, writings of first-century Roman historian Pliny suggested that there were concealed chambers directly beneath the Great Sphinx of Giza.

Pliny wrote about the existence of a tomb belonging to a ruler called Harmakhis. Interestingly, it is believed that the Great Sphinx was once called “The Great Sphinx Harmakhis who mounted guard since the time of the Followers of Horus.”

But it is perhaps Arab writer Altelemsani who documented the most amazing underground chamber near the Great Pyramid of Giza.

In an ancient manuscript housed at the British Museum, Altelemsani wrote about an extensive underground chamber located beneath the surface, exactly between the Great Pyramid and the Nile River:

((Source: Chapter 8 of “The Secret of The Bible” From NEXUS MAGAZINE APRIL-MAY 2004)

“…In the days of Ahmed Ben Touloun, a party entered the Great Pyramid through the tunnel and found in a side-chamber a goblet of a glass of rare color and texture. As they were leaving, they missed one of the party and, upon returning to seek him, he came out to them naked and laughing, said, Do not follow or seek for me, and then rushed back into the pyramid. His friends perceived that he was enchanted.”

“Upon learning about strange happenings under the Pyramid, Ahmed Ben Touloun expressed a desire to see the goblet of glass. During the examination, it was filled with water and weighed, then emptied and re-weighed. The historian wrote that it was found to be of the same weight when empty as full of water.”

So the question remains, what exactly is there beneath the Sphinx? Beneath the Pyramids and surrounding areas?

Are the mysterious chambers, tunnels, and labyrinths described by ancient authors such as Herodotus real? Or is their existence nothing more but the figment of their imaginations?