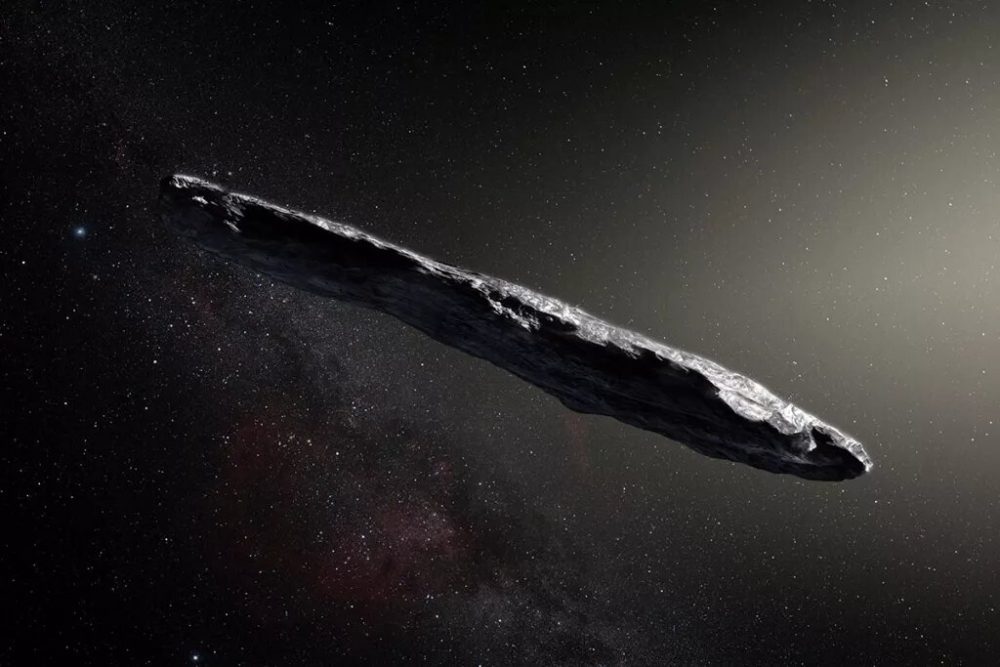 According to Professor Avi Loeb from Harvard University, in 2017 we may have found evidence of ancient alien technology, aliens likely visited us and we witnessed it, and they are probably returning too.

In 2017, for the first time in the history of space exploration, scientists spotted a mysterious interstellar object from deep space passing through the solar system. It was a mysterious object flying across our solar system, and we had never seen anything like it before.

Astronomers did not have much time to study the object since, by the time our telescopes on Earth spotted it, the enigmatic object was already heading away from Earth.

So what was Oumuamua? Is it just an oddly-shaped rock?

The book by Harvard Astronomer Avi Loeb focuses on Oumuamua and everything related to this unique case of an intercepted object from space.

The book’s title is “Extraterrestrial: The First Sign of Intelligent Life Beyond Earth” and was released January 26th, 2021.

Oumuamua: Did we witness the first clear sign of alien life?

Let’s go back to the discovery of Oumuamua in 2017. October 19 is considered the official date of the discovery, but the object actually entered the solar system on September 6 and it took time before astronomers found it.

The sequence of its movement is interesting. Initial theories suggested that it was a comet and then an asteroid, but the reality is that it has not yet been confirmed what exactly it is.

In normal cases with space objects, when they are under the influence of the sun’s gravity, the speed and trajectory can be calculated, but in-depth observations have shown that Oumuamua does not move according to the calculations of experts.

On September 9, 2017, the alien object began its orbit around the sun at an incredible speed of 196,000 miles per hour before continuing past Venus, Earth, and then into the depths of space.

Perhaps most interestingly, Oumuamua’s speed increased gradually, but significantly according to the understanding of science.

This would normally mean that it is a comet because in such a movement along with the sun one can expect acceleration, but in the case of Oumuamua, the typical tail of the comet was missing.

The entire new book is focused on Loebs’s theory that goes against common scientific beliefs. He believes that Oumuamua could be technology or trash left by an alien civilization.

As you can probably guess, most scientists hardly agreed with his claims. It is more than obvious how most people in high positions would rather not discuss the possible existence of alien life.

There were even responses in the form of articles that provided some evidence against his claims. On the other hand, there is almost nothing we know about Oumuamua anyway.

For example, let’s take the shape of the object. The series of observations made after the discovery suggested that Oumuamua had the shape of a cigar – about 400 meters long and 10 times smaller in width.

The world has never seen an object with this shape before although there have been theories of such in existence in space in the past.

Actually, Loeb has a different suggestion about the actual shape of Oumuamua. He believes the object may be a large disk-shaped sail which would explain how it moves through space and how it accelerates.

In contrast, scientists against his ideas suggested that Oumuamua may accelerate with the help of frozen hydrogen in a similar way to how comets move. Loeb’s team responded to this theory with a scientific paper that proves that the hydrogen would have evaporated long before the object reached us.

Just as there is no convincing explanation based on our current knowledge of extraterrestrial objects, there is no reason to rule out the possibility that Oumuamua may be of literal extraterrestrial origin. Whether it is a working technology, a forgotten one, or abandoned garbage of an alien civilization, is not as important as just proving it.

This was the first object of its kind and to me, this is more than we need to focus our efforts to research it and potentially discover more of its kind. If there is one, there should be more, right?

Following this logic, if there is life on Earth, there should be more somewhere else. Maybe our current technological level is not advanced enough to capture and observe such objects. It may become possible once the upcoming James Webb Space Telescope is launched this year (hopefully).

Overall, the only way to confirm any of Avi Loeb’s theories about Oumuamua and its origin is to find more similar objects in space. For now, we should see what Loeb actually wrote in his book to understand his ideas better.