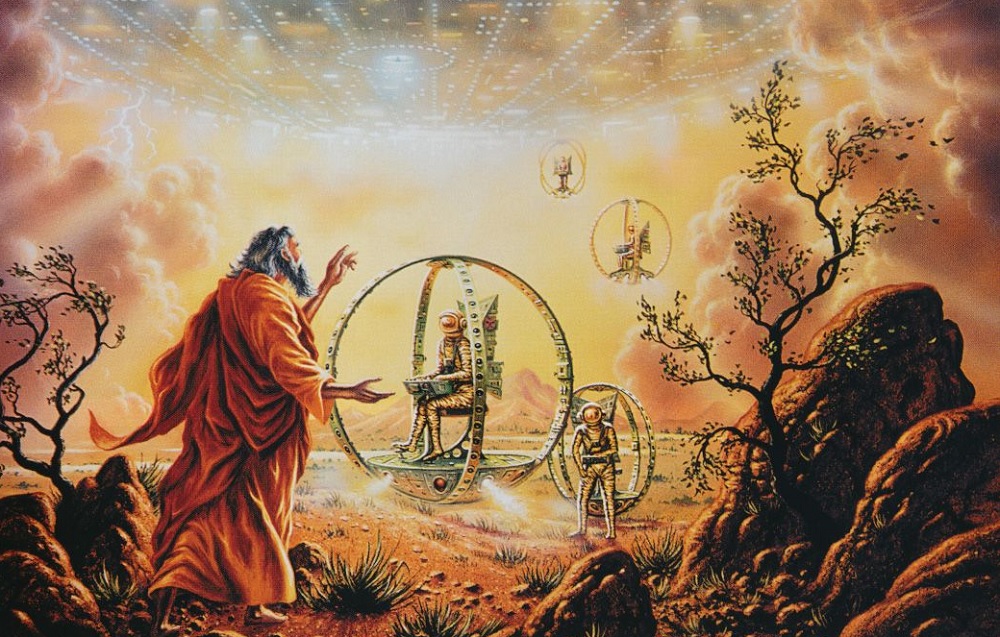 Was Ezekiel's wheel the very first description of an actual 'UFO'?

Ezekiel’s story is perhaps one of the most exciting stories found in the Bible, especially if you look at the story from a modern, technological point of view.

When ancient texts, legends, and stories are viewed and interpreted through modern eyes, we start to understand that Earth’s ancient past is far more exciting and mysterious than we’ve ever imagined.

When one’s personal view is not bound by strict beliefs set forth by modern scholars, you become aware of the fact that our ancestors were trying to tell us something.

It’s not a secret that millions of people worldwide are convinced that ancient mankind was visited by beings thousands of years ago, not from Earth.

By interpreting our ancient history through modern eyes and without predispositions, we come to the possibility that our ancient ancestors may have been visited by an advanced race of alien beings rather than Gods.

And one such visitation is excellently described in the Bible: Ezekiel’s story.

Ezekiel, one of 66 books in the Bible

Ezekiel’s vision of the Merkabah, the so-called wheeled chariot, gives a lot of room for interpretation. Rather than a wheeled chariot, many ancient astronaut theorists argue that the Merkabah may have been a spaceship or some space shuttle that landed on Earth in the distant past.

One of the most famous authors supporting this idea is Erich Von Daniken. He has provided compelling evidence through his research, which points to an alternative explanation/interpretation of the Book of Ezekiel and what Ezekiel may have witnessed in the past.

In Von Daniken’s book Chariot of the Gods, the Swiss author set forth the idea that Ezekiel’s vision was that of a space shuttle and not a divine chariot.

However, the more Blumirch researched, the less he was convinced he could disprove Von Daniken’s theory.

Eventually, he started writing a book.

Blumrich soon realized, through his research, that Ezekiel may have been describing a Spaceship landing on Earth and not just a heavenly chariot.

In fact, Blumrich was so convinced that he patented his very own version of an omnidirectional wheel.

The most important thing here worth mentioning is the fact that Blumrich realized on his own, through his own research, that the description present in the bible possibly is that of a spaceship.

In Ezekiel’s book, an ancient work of literature which is among the very first works written in a first-person account—unlike other books written in the third person—Ezekiel describes seeing a wheeled chariot come toward him descending from the sky.

This alleged chariot was piloted by beings with the “likeness of a man.”

What does that mean? It means they weren’t humans, but they may have been humanoid, explain ancient astronaut theorists.

Furthermore, Ezekiel describes the ‘chariot’ landing, and it sounds pretty much like the description of a spaceship landing.

The windstorm, flash of lightning, and brilliant lights described by Ezekiel sound everything like a modern-day spacecraft coming down for a landing. It was misinterpreted like many other technologies in the past, since people living on Earth thousands of years ago in the absence of any similar technology could not discern between advanced technology and ‘divine apparitions.’

But what I find most interesting is that Ezekiel even describes the fire ‘powering’ the alleged chariot as appearing as “glowing metal”:

“4I looked, and I saw a windstorm coming out of the northan immense cloud with flashing lightning and surrounded by brilliant light. The center of the fire looked like glowing metal, 5 and in the fire was what looked like four living creatures. In appearance, their form was human, 6 but each of them had four faces and four wings. 7 Their legs were straight; their feet were like those of a calf and gleamed like burnished bronze. 8 Under their wings on their four sides, they had human hands. All four of them had faces and wings, 9 and the wings of one touched the wings of another. Each one went straight ahead; they did not turn as they moved.” – Ezekiel 1

No matter what, you can’t deny that the description by Ezekiel sounds pretty familiar to how we would describe modern-day spaceships lifting off and landing on Earth.

However, Ezekiel not only seems to offer an incredible description of the supposed ‘spacecraft but’ he also describes its occupants, explains ancient astronaut theorists:

“15 As I looked at the living creatures, I saw a wheel on the ground beside each creature with its four faces. 16 This was the wheels’ appearance and structure: They sparkled like topaz, and all four looked alike. Each appeared to be made like a wheel intersecting a wheel. 17 As they moved, they would go in any one of the four directions the creatures faced; the wheels did not change direction as the creatures went. 18 Their rims were high and awesome, and all four rims were full of eyes all around… 22 Spread out above the heads of the living creatures was what looked something like a vault, sparkling like crystal, and awesome.” – Ezekiel 1