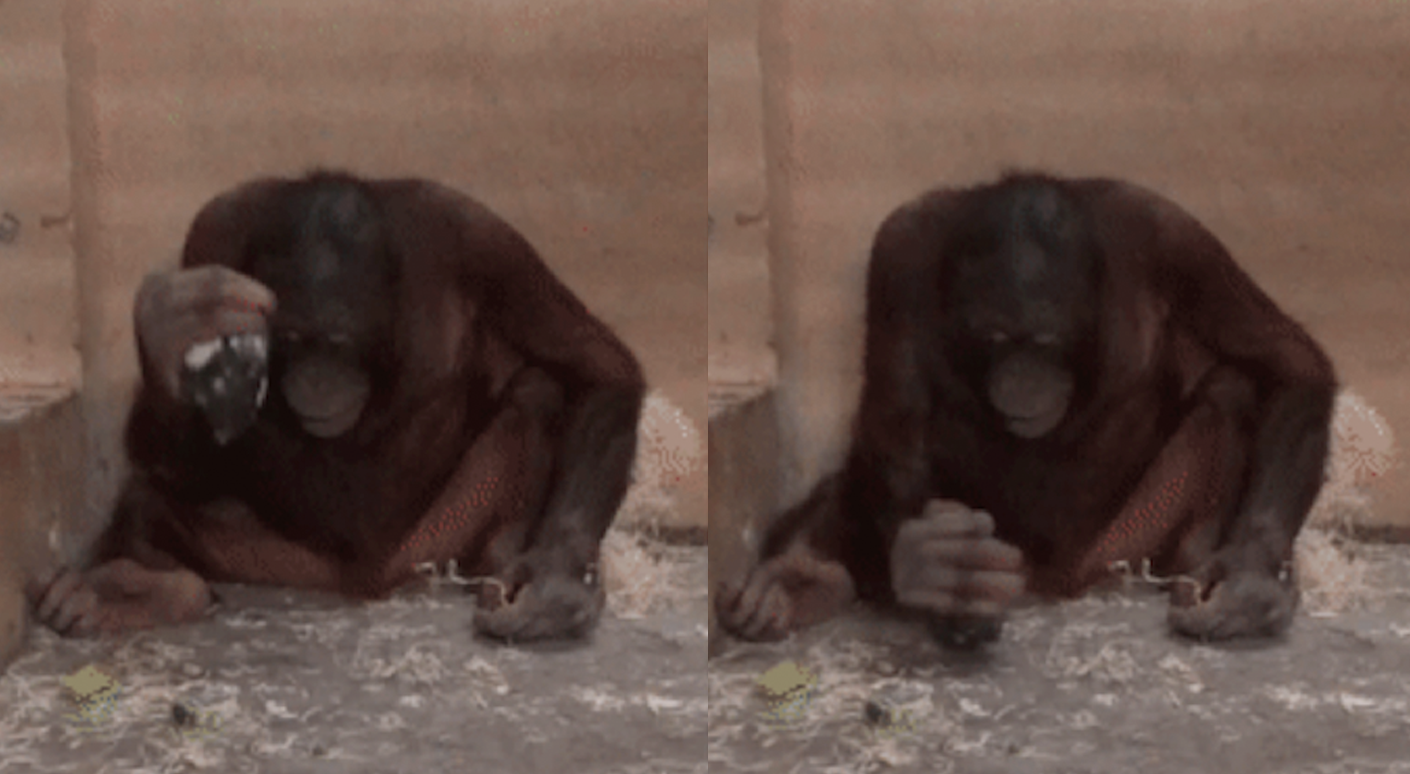 Biologists decided to conduct an experiment on five orangutans from two zoos and find out if these great apes could independently make and use stone tools for their intended purpose.

About 2.6 million years ago began the longest era in the history of mankind – the Paleolithic, which is associated with the beginning of the manufacture of primitive stone tools by hominins. The oldest finds related to the Olduvai (Oldowan) archaeological culture were discovered in East Africa.

Animals also use different items to get food

Many wild animals also use available items to get their own food. One of the most interesting sightings comes from the South American black-striped capuchin (Sapajus libidinosus), which often uses stones to crack nuts and various seeds. Scientists have found that they are able to crack stones with a hammer, putting them on an anvil, but in the future, they do not use them as tools.

The primates closest to humans, chimpanzees (Pan), have not been seen to do this in the wild. However, several captive experiments have shown that bonobos (P. paniscus) and orangutans (Pongo) are able to learn from a person how to make stone flakes and their use for food extraction.

Can orangutans learn how to use stone tools?

Alba Motes-Rodrigo from the University of Tübingen, together with scientists from Germany, Norway, and South Africa, decided to conduct a series of experiments on five Kalimantan orangutans (P. pygmaeus) to find out the ability of these great apes to use and make stone tools.

They selected two male orangutans from a zoo in Kristiansand, Norway, and three females from a British zoo in Atherston for the study. Scientists noted that these individuals had not previously been trained by humans and did not have access to the stones in their enclosures.

During an experiment in Norway, biologists left two boxes of bait for primates, which could only be obtained using sharp stone tools. To do this, they put one concrete hammer weighing about 2.2 kilograms into the enclosure, as well as pre-prepared cores weighing from 0.8 to 1.5 kilograms. During the second stage of the experiment, these orangutans were also planted with a flint flake 7.6 × 5 × 1.7 cm in size, made by a man, not in front of animals.

At the beginning of the experiment, the biologists did not give the males any clues to test their ability to spontaneously make stone tools. After the primates stopped making stone tools, the researchers placed flakes next to the core, two of which were glued to the blank. Orangutans from an English zoo were given baits, three concrete hammers, and cores, after which they demonstrated to the animals at least 27 times how to make stone tools and how to open a box of food.

As a result of the experiment, the orangutans from the first zoo at the initial stage did not do what the scientists wanted from them. Only one of the males (Loui) opened the bait, but for this, he used his own strength and a stick he brought with him. When biologists planted a flake already made on their own, the same orangutan in one of the attempts cut a hole on the bait, holding the tool with his teeth.

Then he expanded it with his hands and took out the award. Then the scientists motivated the animals to take the flakes in their hands and exchange them for grapes. During one of the tests, Loui pulled the core out of the fixed platform and began to beat it against the floor and walls, holding it with one hand. He managed to chip off three sharp flakes from the workpiece, which he later did not use in any way.

Biologists noted that among the three females from the English zoo, the youngest individual (Molly) most of all interacted with planted objects. So, she broke one of the hammers into six separate pieces of concrete, after which she licked and sniffed them, but did not begin to use them in any way, although two of these fragments had sharp edges. Molly used the hammer three times to hit the core, as the experimenters showed her, but she failed to make flakes.

Orangutans and their abilities to use stone tools: Conclusions

As a result of a series of experiments, scientists concluded that under the initial conditions, none of the orangutans began to make sharp tools. However, both males from the Norwegian zoo picked up a mallet. Only once did a seven-year-old male use a sharp flake made by man as a cutting tool, and once he himself made three sharp chips from the core. In addition, they noted the learning ability of one of the females, which began to repeat some actions after the demonstrators.

The researchers believe that the accidental manufacture of sharp stone tools and their use as cutting tools may have been observed in some species of extinct primates. They hypothesized that the last common ancestor of Pongo and Homo may have had the necessary cognitive and physical abilities for such behavior.