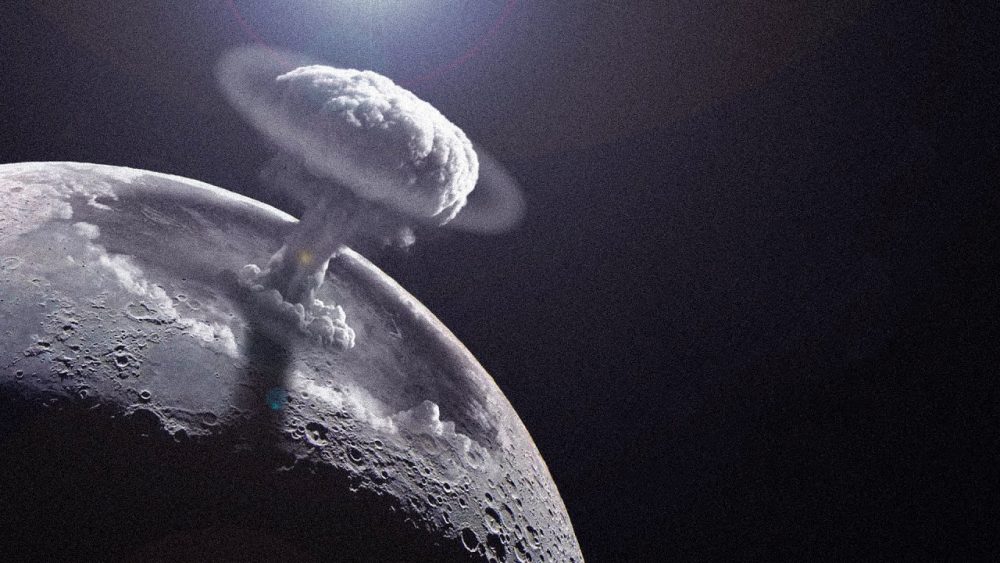 Called Project A119, it was envisioned in 1959 by the United States Air Force Division at the Kirtland Air Force Base in New Mexico. The idea was simple, carry a Nuke (1.7+ kilotons of TNT) to the moon and detonate it on the Moon's terminator, a region on the lunar surface indicating the part of the Moon that is illuminated by the sun, and the part that is in eternal darkness when viewed from Earth.

Declassified papers have revealed that the United States government had secret plans to blow up the Moon; the idea was to detonate a nuke on the lunar surface, something reminiscent straight out of a Hollywood action movie our space force strikes alien visitors parked on the Moon.

However, there were no aliens involved, and it wasn’t a movie. Instead, it was a project called A119, a mission cooked up at the dawn of the space race between the Soviet Union and the USA. The idea was envisioned by the United States Air Force Division at the Kirtland Air Force Base in New Mexico.

The paper detailing the mission was published as a report in June 1959, titled “A Study of Lunar Research Flights.” The study revealed plans to transport a nuclear bomb to the Moon and have it explode on the lunar terminator, a region on the lunar surface denoting the part of the Moon that is illuminated by the sun and the part that is in eternal darkness when viewed from Earth.

The mission was no joke.

Such was the size of the bomb that had the mission gone through; the detonation would have easily been visible with the unaided eye from Earth. This was mostly because the military wanted to add sodium to the bomb, and the sodium would have made the explosion glow even brighter.

Project A119 was more than just a “scientific experiment.”

Although it would have–probably provided–insightful data that scientists could have made use of, the project itself was more of a plot to show of the big guns to the “enemy.”

Project A119’s scientific goals were to detonate a smaller nuclear device–around 1.7+ kilotons of TNT, to facilitate the study of the Moon’s geological make-up.

As explained by John Greenewald, Jr., the man behind The Black Vault, an online repository of some 2.1 million pages of formerly secret documents pertaining to UFOs and other subjects, detonating a nuke on the Moon would have been a show of dominance, a message of power sent by the USA to the Soviet Union, and eventually the entire world.

Luckily, the project never happened, probably because scientists saw that such an explosion would create more damage than good. The little scientific data that could be gathered was not worth the risk and out of fear of a massive negative public reaction.

However, one of the most important reasons why Project 119 never happened is because of the possible implications of nuclear fallout for future lunar research and colonization.

Had the nuclear bomb been detonated on the lunar surface, lunar missions like those planned in recent months would not have been possible.

Strangely, the Soviet Union had planned a similar project, whereby they planned on transporting a nuke to the Moon and detonating it on the surface. Luckily, this project, too, never took place.

The codename of the Soviet Lunar Mission was the letter “E.”

E-1 was the mission to reach the Moon. E-2 and E-3 are involved in sending a spacecraft to the Moon, around it to the far side, taking images of the surface, both on the near and far side.

The final stage was project E-4, where a nuclear strike was to be carried on the lunar surface as a display of military power for the whole world to see.

In 1963, the Partial Nuclear Test Ban Treaty was singled, and in 1967 the Other Space Treaty, preventing future exploration of the concept of detonating nuclear devices on the lunar surface.