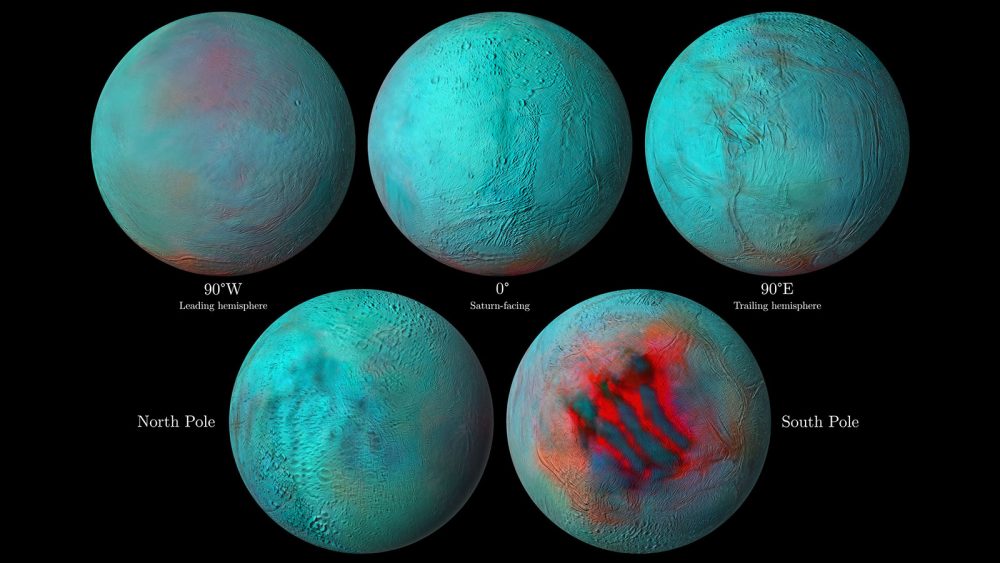 Data gathered by Cassini suggest unprecedented geological activity o Enceladus. An infrared view of the moon suggests that a large region of the alien moon's northern Hemisphere is relatively young, with icy structures protruding from deep beneath.

Data used to construct new infrared images of Saturn’s moon Enceladus provide strong evidence that the surface of the northern hemisphere has been reconfigured from within.

The visible and infrared mapping spectrometer of the Cassini mission (VIMS) collected light reflected from Saturn, its rings, and its ten main icy moons, light visible to humans and also infrared light.

VIMS then separated the light into its various wavelengths, providing information that tells scientists more about the composition of the material that reflects it.

Cassini scientists discovered in 2005 that Enceladus, which to the naked eye looks like a bright, highly reflective white snowball, shoots huge columns of ice grains and water vapor from an ocean beneath the icy crust.

The new spectral map shows that the infrared signals clearly correlate with that geological activity, which is easily seen at the south pole.

This is where the so-called “tiger stripe” breaks through the ice and steam from the inland ocean.

But some of the same infrared features also appear in the Northern Hemisphere.

That tells scientists not only that the northern area is covered in fresh ice, but that the same kind of geological activity – a reconfiguration of the landscape – has occurred in both hemispheres.

This reconfiguration in the north may be due to ice jets or a more gradual movement of ice through fractures in the crust, from the ocean floor to the surface.

Infrared data shows that the surface of the South Pole is young, which is not a surprise because scientists knew about the jets that spew icy material from there.

Thanks to these infrared views, experts can go back in time and say that a large region of the Northern Hemisphere also looked young and was probably active not long ago, on geological timelines. The data gathered by Cassini is unique and offers unprecedented info on Saturn and its moons.

Cassini was a spacecraft that observed Saturn for more than 13 years before depleting its fuel supply. The spacecraft eventually plunged it into the planet’s atmosphere in September 2017, in part to protect Enceladus, which has the potential to maintain conditions suitable for life, with its ocean likely warmed and churned by hydrothermal vents like those of the ocean bottoms of the Earth.

In fact, of all places in the solar system, now after Venus, which likely is home to microbial, alien life, Enceladus is the next best place where we could find life.

In fact, when speaking about moons in our solar system, Enceladus is one of the most promising places to look for signs of life. It’s humid, resourceful, and warm enough to host life as we know it. These are all virtues with a high value on our list of requirements for places outside of Earth, where life may have developed.

Enceladus was discovered on August 28, 1789, by William Herschel, but very little was known about it until the Voyager probes passed very close in the early 1980s.

Cassini’s instruments “surveyed, sniffed, analyzed, and scrutinized” the Saturnian system. In addition to revealing unprecedented data about its mons, Cassini revealed a great detail of the wonders of Saturn. It traveled 7.9 billion kilometers and spent 20 years in space. During this time, it took 452,048 images while it orbited Saturn 294 times.