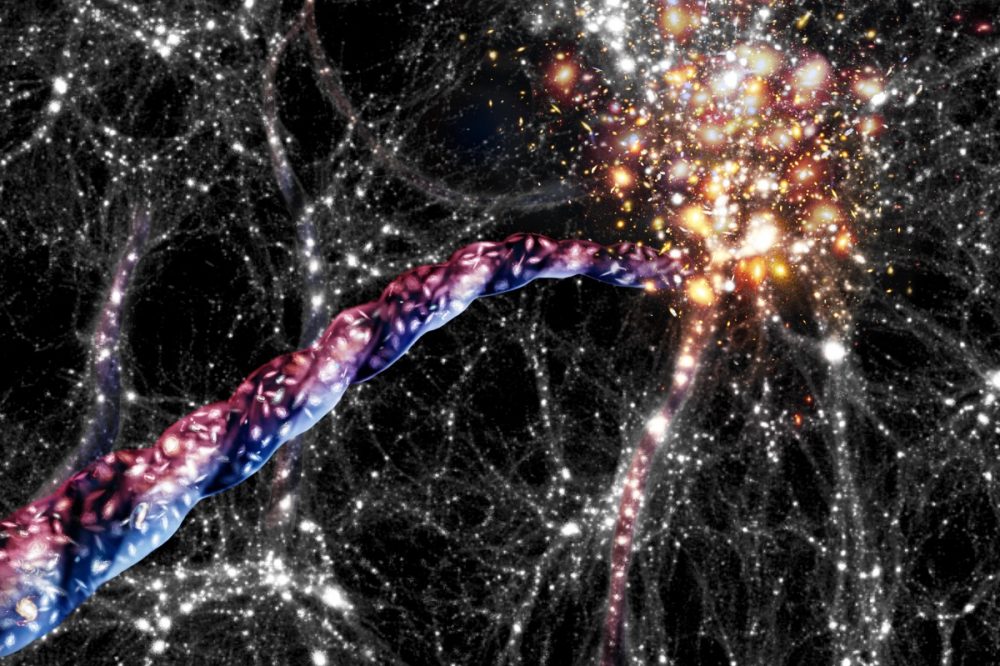 The galactic filaments of the large-scale structure of the Universe stretch for hundreds of millions of light-years - and, as it turned out, rotate, dragging all their galaxies into motion.

Nothing in space is at rest. Everything moves and revolves – the Earth, the Sun, the Milky Way – and possibly the entire Universe.

New research by scientists from the Potsdam Astrophysical Institute has shown that rotation occurs on the largest cosmological scales, involving cosmic filaments stretched between galaxies over distances of hundreds of millions of light-years.

Everything you need to know about the spinning cosmic filaments

1. According to modern concepts, the large-scale structure of the Universe is formed by a colossal network of dark matter, on which ordinary matter is concentrated. Passing between voids, they connect large clusters of galaxies and collect galaxies and gas around themselves.

2. On scales of hundreds of millions of light-years, this network manifests itself in the form of cosmic filaments.
The authors of a new article, published in the journal Nature Astronomy, have demonstrated that they, too, are spinning.

3. To do this, Peng Wang, Noam Libeskind, and their colleagues used data from the SDS survey, which surveyed hundreds of thousands of galaxies. Scientists have localized the position of some of these galaxies in different parts of the cosmic filaments.

4. Then their spectrum was analyzed to determine the movement of each galaxy by the Doppler effect – the change in radiation frequency due to the movement of the source relative to the observer.

5. Such work showed that galaxies are divided into two groups, showing a red or blue shift, moving from us or towards us.

6. This suggests that they are located on different sides of the cosmic filaments, which rotate as a whole (although due to technical difficulties it was not possible to reliably demonstrate this in all cases and not for all considered filaments).

7. Scientists examined more than 17,000 of these rotating filaments and measured the speeds of many galaxies. At this point, the fastest whirl they discovered was about 360,000 kilometers per hour.

8. Curiously, the higher the masses of the galactic clusters that connect such threads, the more pronounced the rotation.

9. And now, a new cosmic mystery was born. Why are these cosmic filaments spinning? According to researchers, this movement could not have originated from the Big Bang but originated much later when these massive structures had already formed.

10. Perhaps it is their powerful gravity that somehow triggers or supports this rotation and, according to the authors of the work, makes cosmic filaments “the largest objects with angular momentum.” Yet, scientists have no certainty in this explanation and plan to make new computer simulations in order to better understand the behavior of matter in such cosmic regions.

Last but not least, scientists noted that this discovery does not mean that all large structures in the universe are spinning like the ones mentioned in the study. It simply confirms that such phenomena exist at such scales in deep space.