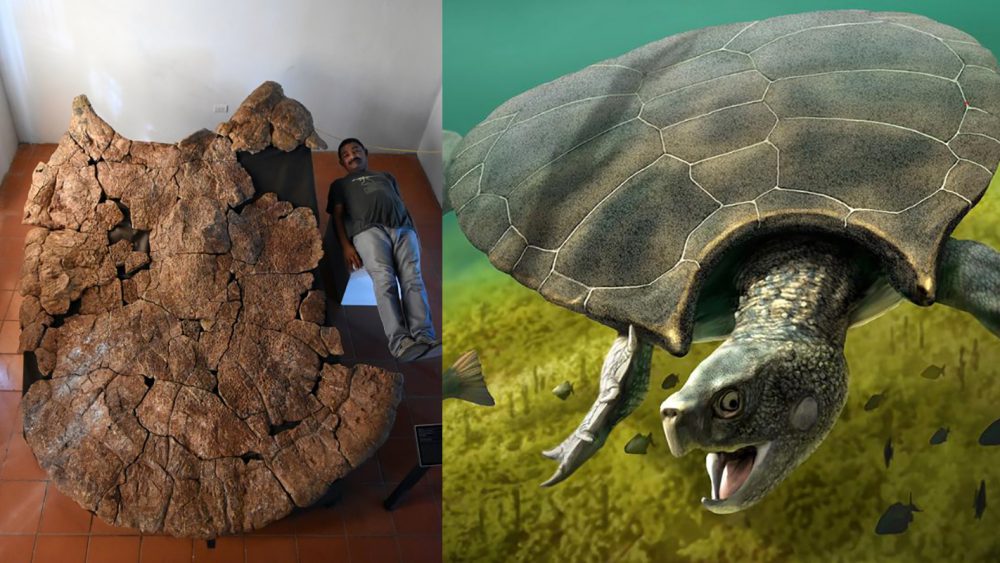 With a weight of around 1,145 kg, the turtle was the size of a car. The turtle was 100 times heavier than its closest relative.

A turtle the size of a car, dubbed Stupendemys Geographicus, is thought to have been the largest turtle to have ever existed on the surface of the planet. The recently-uncovered fossils were found in strata that dates back around eight million years.

New specimens of the extinct turtle “Stupendemys Geographicus”, described in 1970, reveal that it was 100 times heavier than its relatives and had a three-meter, horned shell.

“The carapace of some Stupendemys individuals reached almost three meters, making it one of the largest, if not the largest turtle that ever existed,” says Marcelo Sánchez, director of the Paleontological Institute and Museum of UZH and head of the study.

Specimens of the massive turtle were discovered by Paleobiologists from the University of Zurich while exploring Venezuela and Colombia. This region, together with parts of Brazil is considered a global hot-spot when it comes down to animal diversity.

The extinct fauna of the region has been described as beyond unique, and evidence of that are some of the fossils discovered in the region like those of giant rodents and crocodylians.

The discovery of Stupendemys Geographicus is incredible.

With an estimated mass of 1,145 kg – almost one hundred times that of its closest living relative, the big-headed Amazon river turtle, Stupendemys Geographicus was a true giant.

The researchers have reported that in certain specimens, the shell revealed a peculiar and unexpected characteristic: horns.

The paleobiologist revealed that this is the first time that sexual dimorphism in the form of horned shells has been described for any of the side-necked turtles, one of the two major groups of turtles worldwide.

Although it was the size of a car, the turtle had natural enemies and the researchers report that in many areas, the occurrence of Stupendemys coincides with Purussaurus, the largest caimans. This is supported by the discovery of bite marks as well as punctured bones in the fossilized carapaces of Stupendemys.

In addition to the carapace of the giant turtle, the scientists have also discovered its jaws among other skeleton parts. This allowed them to thoroughly review the evolutionary relationship of the species within the turtle family tree of life.

This led experts to conclude that the turtles living in the Amazon are the closest relatives of Stupendemys Geographicus.

“Based on studies of the turtle anatomy, we now know that some living turtles from the Amazon region are the closest living relatives,” Sánchez revealed.

Researchers further explained that based on the findings of similar fossils in Brazil, Colombia and Venezuela, a much wider geographic distribution of Stupendemys can be inferred; the animal lived across the whole northern part of Southern America.