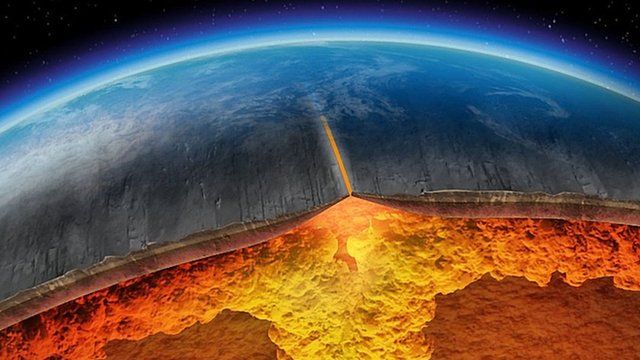 Scientists have recently discovered that the Earth is swallowing its own oceans.

According to experts, our planet’s crust is swallowing more ocean than previously thought.

The water appears to be ‘disappearing’ into trenches between interlocking tectonic plates.

As the tectonic plates move, they drag more water into the Earth than previously thought, according to a new study published by specialists from Washington University, and presented in the journal Nature.

Scientists led by Chen Cai used data collected by various seismic sensors installed 11,000 meters under the sea in the Mariana Trench, the deepest part of the oceans.

“Before we did this study, every researcher knew that water must be carried down by the subducting slab,” Cai told in an interview with Live Science. “But they just didn’t know how much water.”

In parts of the Western Pacific, the devices detected earthquakes and their echoes, which run along with the earth’s crust.

Cai and his team measured the speed of those tremors, whose deceleration indicates the presence of water in fractures of rock and minerals that contain water inside their crystals.

After recording the deceleration of echoes in the crust and taking into account data such as temperatures and pressure, scientists calculated that 3,000 million teragrams of water are lost every year in the crust and mantle.

Seawater is heavy; a cube of this water 1 meter (3.3 feet) long on each side would weigh 1,024 kilograms (2,250 lbs.). But still, the amount pulled down by subduction zones is mind-boggling. It’s also three times as much water as subduction zones were previously estimated to take in, Cai said.

The water should reappear on the surface and usually do so in the form of volcanic eruptions.

However, recent estimates from the Washington University study have revealed a stark imbalance in the intake and the outflow.

Cai says that the fact that both quantities are not equal suggests that “scientists still do not understand the way water moves inside the Earth.”