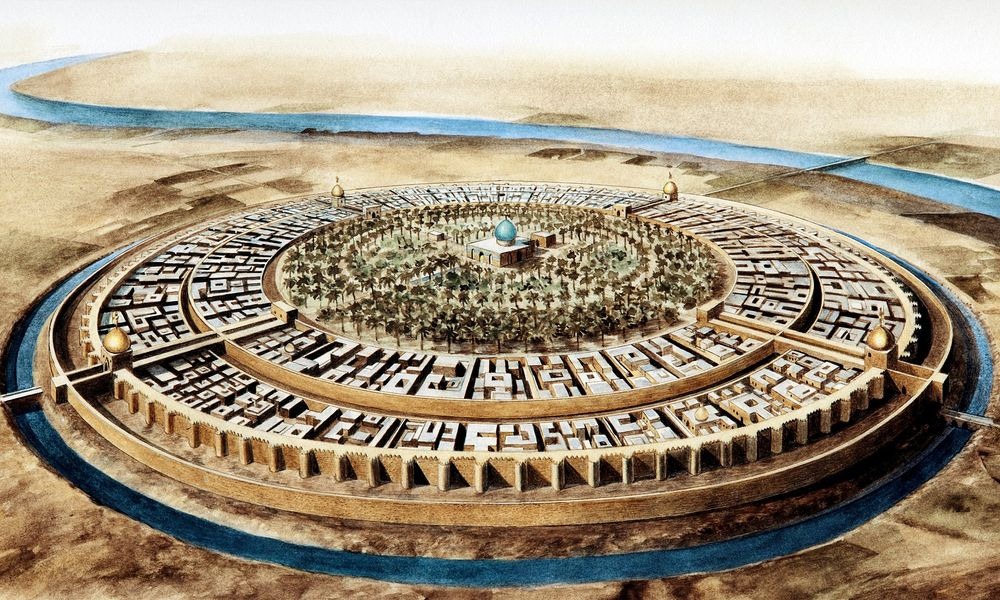 The Round City of Baghdad was also home to the mysterious House of Wisdom.

The original core of Baghdad is the round city of Baghdad, constructed in ancient times by the Abbasid Caliph al-Mansur in AD 762–766 as the official House of the Abbasid court.

Its official name in Abbasid times was The City of Peace, and it was home to the famous library referred to as the House of Wisdom.

In 762, the construction of the ‘perfect city’ began under the supervision of four architects.

The ‘Round City’: a glorious milestone in the history of urban design

Massive resources were hauled from all over the region for the project. It is reported that 100,000 workers and craftsmen and sums of 18 million gold dinars or 100 million silver dirhams were used to construct the ’round city of Baghdad.’

That’s why the city’s foundation, more than 1,250 years ago, marked a glorious milestone in the history of urban design.

Before construction, Mansur brought in architects, designers, carpenters, engineers, blacksmiths, and surveyors across the Abbasid Empire. He also consulted astrologers and considered everything to build a perfect city that would later be referred to as “the crossroads of the universe.”

The perfect circle– two kilometers across– was a tribute from Mansur to Euclid’s geometric teachings, whom the ruler admired and studied.

On July 30, 762, after astrologers declared this the perfect construction date, Mensur offered a prayer to Allah and laid the first ceremonial brick, kick-starting the city’s construction.

To the center of the majestic circle, surrounded by massive double walls, were the caliphal Palace of the Golden Gate and the main mosque.

Mansur’s goal was to create the perfect city. He loved the site so much he is quoted saying: “This is indeed the city that I am to found, where I am to live, and where my descendants will reign afterward.”

The construction of the round city of Baghdad is considered by far the most outstanding construction project in the Islamic world:

Yaqubi, a Muslim geographer and, according to some, the first historian of world culture in the Abbasid Caliphate, said there were 100,000 workers involved in the construction process.

Eventually, Baghdad’s city evolved into a prominent cultural, commercial, and intellectual center for the Islamic world.

Baghdad is reported as one of the Middle Ages’ largest cities for much of the Abbasid era, boasting a population of more than a million inhabitants.

The House of Wisdom

The Round City of Baghdad was also home to the House of wisdom, a major Abbasid public academy and intellectual center in Baghdad.

As noted by experts, Baghdad’s House of Wisdom was founded either as a library for the Caliph Harun al-Rashid collections during the late 8th century. It was later turned into a public academy during the rule of Al-Ma’ mun.

However, some argue it was a private collection created by Al-Mansur (who ruled between 754–775) to preserve rare books and collections of poetry in both Arabic and Persian languages.

In 766, the great Round City commissioned by Mansur was completed, and it was a massive achievement.

The ninth-century essayist, polymath, and polemicist al-Jahiz was left baffled by the city, as he is quoted saying:

“I have seen the great cities, including those noted for their durable construction. I have seen such cities in the districts of Syria, in Byzantine territory. Other provinces, but I have never seen a city of greater height, more perfect circularity, more endowed with superior merits, or possessing more spacious gates or more perfect defenses than Al Zawra, that is to say, the city of Abu Jafar al-Mansur.”