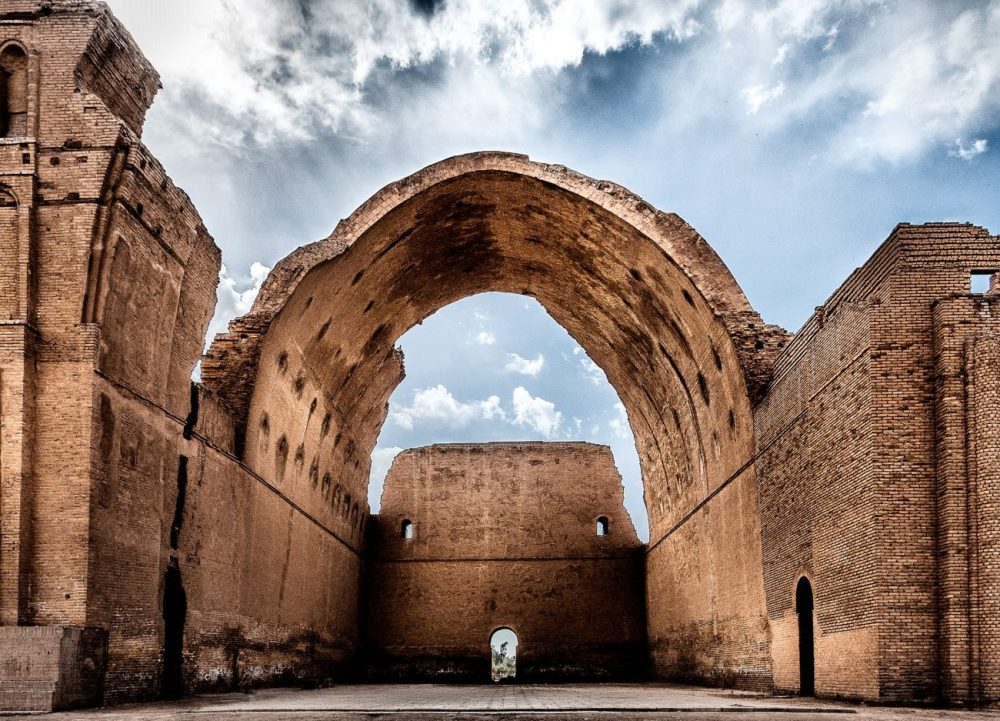 It is the largest vault ever constructed in the world.

The archway, the only standing structure of the ancient city of Ctesiphon, is considered a landmark in the history of architecture and is the largest single-span vault of unreinforced brickwork in the world.

The city was founded in the late 120s BC, built on the site of a military camp established across from Seleucia by Mithridates I of Parthia.

In ancient times Babylon was the metropolis of Assyria; but now Seleucia is the metropolis, I mean the Seleucia on the Tigris, as it is called. Nearby is situated a village called Ctesiphon, a large village. This village the kings of the Parthians were wont to make their winter residence, thus sparing the Seleucians, in order that the Seleucians might not be oppressed by having the Scythianfolk or soldiery quartered amongst them. Because of the Parthian power, therefore, Ctesiphon is a city rather than a village; its size is such that it lodges a great number of people, and it has been equipped with buildings by the Parthians themselves; and it has been provided by the Parthians with wares for sale and with the arts that are pleasing to the Parthians; for the Parthian kings are accustomed to spend the winter there because of the salubrity of the air, but they summer at Ecbatana and in Hyrcaniabecause of the prevalence of their ancient renown.

While an exact date of the Arch’s construction has not been agreed upon, most scholars argue it was likely founded by Shapour I who ruled Persia from 242 to 272 AD.

Other experts argue that its construction began when Anushiruwan the Just (Khosrow I) ruled the lands.

Until modern times, the arched iwan hall–about 37 meters high 26 meters across and 50 meters long– was the largest constructed, free-standing vault on Earth.

It was part of the imperial complex of the ancient city of Ctesiphon. Located either beneath or behind it was the throne room, occupying a space 24 m (80 ft) wide by 48 m (160 ft) long.

It is a marvel of ancient engineering.

The top of Taq Kasra is approximately 1 meter thick while its walls at the base are up to 7 meters thick.

Today, the Taq Kasra is all that remains above the surface of a majestic ancient city that had remained. for a period of seven centuries—from the 2nd century BC to the 7th century AD—the main capital of the successor dynasties of the Persian empire: Parthians and Sassanids.

The structure was captured by the Arabs during the conquest of Persia in AD 637.