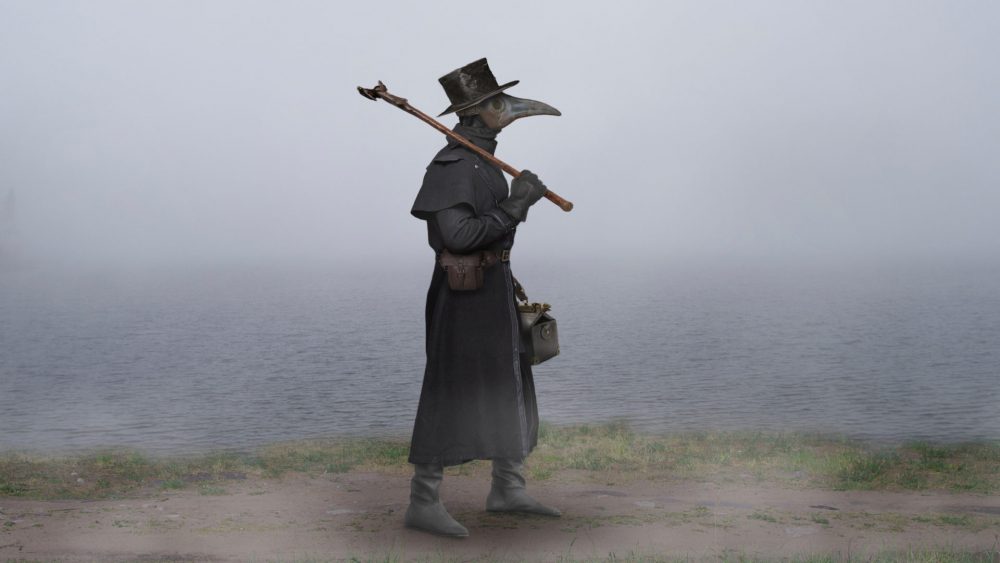 The protective costume was invented by Charles de L'Orme in 1630, and was first used in Naples.

The “black plague” was without a reason of a doubt one of the most devastating pandemics in human history, affecting a larger area of Eurasia in the fourteenth century. It is estimated that between 40-90% of infected people died and that it killed between 30% to 60% of the European population. Its name is due to the fact that one of its most characteristic manifestations was the presence of buboes (bluish-black skin lesions). The disease caused the death of between 75—200 million people in Eurasia and Northern Africa. It peaked in Europe from 1347 to 1351.

Experts believe that the plague likely reduced the global population from an estimated 475 million to 350–375 million in the 14th century.

It was the second-recorded pandemic after the Plague of Justinian, which lasted from AD 542 to 546.  The Black Plague originated either in Central Asia or Eastern Asia, where it most likely made its way to Europe via the Silk Road. It reached Crimea by the year 1347, and then made its way—most likely carried by fleas living on black rats—across the Mediterranean and Africa, Western Asia and the rest of Europe.

Once ashore, the plague made its way to larger areas by means of human fleas—which caused the pneumonic plague. The Black Death was the second disaster that crippled Europe during the Late Middle Ages, the first one being the Great Famine of 1315—1317.

At that time, the pandemic was attributed to various reasons: air corruption caused by the emanation of decomposing organic matter, astronomical phenomena, and even geological phenomena. Currently, we know that the disease was caused by a bacterium (Yersinia pestis) that affects the black rat and is transmitted through the bite of fleas.

The first quarantine to eliminate the spread of the disease was also started, with the authorities in the French city of Marseille being the first to adopt them. It was established that any ship that arrives at its port with a sick person or a person suspected of having the disease should remain on board for a period of thirty days, before going ashore.

The doctors who cared for the plague patients used a thick waxed skin tunic that reached to the ankle, covered their faces with a mask in the shape of a bird’s beak, provided with aromatic substances to mitigate bad odors. In addition, the doctors wore gloves, footwear, and a hat made of goatskin.

The doctors were often referred to as “plague doctors” and were essentially physicians who treated—or at least tried treating—the plague. These physicians were specifically hired by cities and towns and were paid by the government to treat the entire population, both poor and the rich.

However, it is noteworthy to understand that the famous plague doctor costume used to treat the plagues didn’t appear until the 17th century. It is believed that the protective costume was invented by Charles de L’Orme in 1630, and was first used in Naples, but later spread to be used throughout Europe. L’Orme described the mask a “nose half a foot long, shaped like a beak, filled with perfume with only two holes, one on each side near the nostrils, but that can suffice to breathe and to carry along with the air one breathes the impression of the drugs enclosed further along in the beak”.

Doctors that wore the beak mass during the 17th, 18th and even 19th centuries would fill the inside with aromatic items in order to mascarade bad smell.