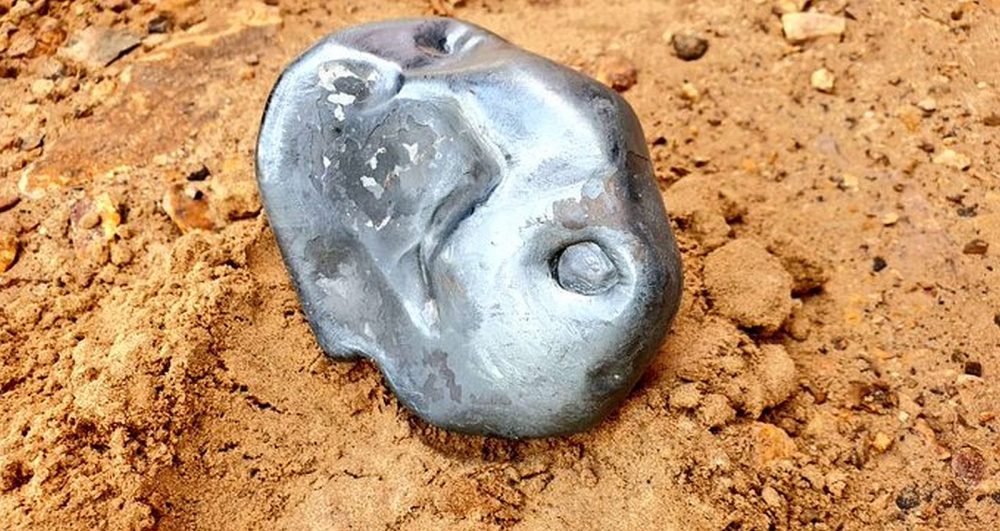 The meteorite survived the trip through Earth's atmosphere and crashed to the surface leaving a crater behind.

A bright metallic meteorite survived the journey through Earth’s atmosphere and crashed into the planet in Rajasthan, India, leaving bystanders stumped. The object fell from the sky in the town of Sanchore, Rajasthan, on the morning of Friday, June 19, 2020 (7 a.m. local time). The explosion produced by the impact was such that it resonated at a distance of 2 kilometers, according to news outlet India Today.

“There was a tremendous noise in the morning as if an airplane had crashed. However, at first, we couldn’t see where it had fallen. It was only after a while that we were able to find an object lying in a 30-centimeter crater. It fell only 100 meters from my house. We immediately notified the authorities,” said Ajmal Devasi, one of the many people who were left stumped by the object.

As per geologists it is a metallic meteorite – very rare and most valuable. @ParveenKaswan pic.twitter.com/6upY31jPLF

The meteorite, which stands out for its shiny metallic appearance, weighs around 2.78 kilograms.

According to local reports, it continued to emit heat even three hours after its fall, leading many residents of the area to think it could explode at any time.

After it had cooled down, the authorities collected the meteorite and put it in a jar for transport. The police have stated that it has been made available to experts for study and that more details about its origin and composition will soon be known.

Images of the meteorite were shared on Twitter, generating great amazement and a number of responses.

This event occurred a few days after a spectacular green fireball crossed the skies of Australia, taking skywatchers by surprise. The object appeared shortly before 1:00 a.m. (local time) last Monday, according to witness reports from the Pilbara region of Western Australia, Northern Territory, and South Australia.

According to rough estimates, around 500 meteorites survive the entry through Earth’s atmosphere, reaching the surface of the planet each year. Despite this, no more than ten are recovered each year. This is because many of these meteorites crash into the ocean or land in remote areas on Earth, crashing in places that are not easy to access.

Furthermore, some meteorites crash into the surface during the daytime, which means that they go undetected. Astronomer can’t generally predict meteorite impacts because most meteoroids traveling in outer space are simply too small to detect.

According to NASA, it is estimated that around 48.5 tons (44,000 kilograms) of meteoritic material falls on Earth each day.

When a meteoroid survives its trip through the atmosphere and hits the ground, it’s called a meteorite.