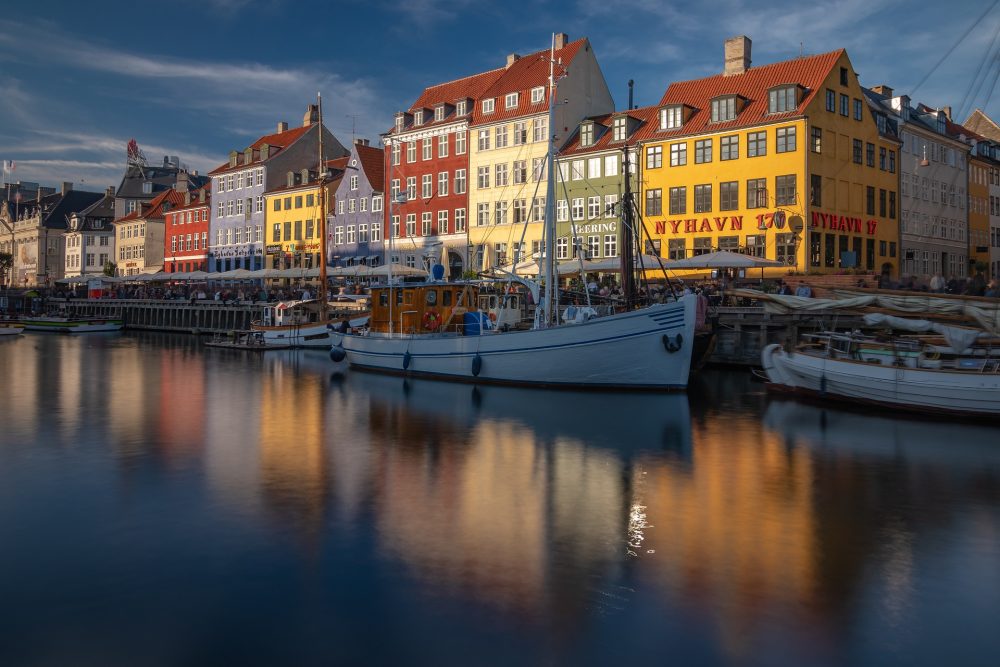 Denmark is a Scandinavian country in Northern Europe bordering the Baltic and the North Sea. The country consists of a large peninsula and many islands referred to as the Danish Archipelago.

“If Copenhagen were a person, that person would be generous, beautiful, elderly, but with a flair. A human being that has certain propensities for quarreling filled with imagination and with an appetite for the new and with respect for the old – somebody who takes good care of things and people.” – Connie Nielsen

Known to people as merely Denmark, this is in fact, the Kingdom of Denmark. The Royal Family has resided here for centuries and made this a sovereign state. As a result, palaces and castles feature massively on the landscape. If you are a history lover, then there is an appreciable amount to explore in Denmark.

If you are looking for some Viking history, go and visit Lindholm Høje. This place contains 682 graves of ancient Vikings dating from the Iron Age and the Viking Age.

They were buried in the sands and have remained there undiscovered for centuries.

Preserved villages with wells and stone circles are also part of this ancient site.

Next to the site is the famous Lindholm Høje Museum, where you can experience 3D exhibitions about the Viking era.

Located in Helsingør, this Maritime Museum was designed by Bjarke Ingels.

What makes this museum so unique is that it is located deep underground where you can enjoy the real tour of Maritime in Denmark.

It is easily reachable from close Copenhagen. This place is worthy of experience as it is one of the most original and unique museums in the world.

When you are coming to Denmark from Sweden by car or train, you will pass this 5-mile long bridge.

This bridge connects Copenhagen in Denmark with Malmo in Sweden. People usually commute to those regions because of their work.

Kastellet is an ancient fortress that mirrors the shape of a star. Located on the edge of Copenhagen, it was commissioned by King Christian IV in 1660, who was fearful of an attack from the sea.

Some say Frederik III commissioned it in 1662.

Bastions at each of the star’s five points would have been a section of the main ramparts that encircled and protected Copenhagen.

Representing the co-existence of nature and man, these sculptures are the work of a famous Danish artist Svend Wiig.

The stark white statues are utterly devoid of decoration, allowing visitors to map their contemplative thoughts on to the figures.

Although the statues may look alike, keen observers will find subtle differences among them.

In the North Atlantic archipelago, you will find these mysterious islands. The Faroe Islands are an island group consisting of 18 major islands ( 779 islands, islets, and skerries) about 655 kilometers off Northern Europe’s coast.

Made of volcanic rocks, the island is covered with a thin layer of moraine or peat soil.

The islands are high and rugged with perpendicular cliffs—the highest at Mount Slaettara.

The coast is highly indented with fjords, and strong tidal currents shape the narrow passages between islands.

The outside of Copenhagen is home to the best-known beer brewery in the world.

The brewery offers tours where you see and learn how beer is made. Beer historians will also explain how beer was made first in Denmark.

Part of the tour is also beer tasting, where you can have a tasting session with classic beer that made this brewery famous.

Sitting on a small island in the center of Copenhagen is Christiansborg Palace.

The island is called Slotsholmen and is now the government’s center and houses the parliament buildings and the Danish prime minister’s office.

The Royal Family officially owns it, but public visits are allowed.

People laid the earliest foundations of Copenhagen’s city in 1167 on this site.

You can see some of this in the form of ruins of a fortress that dates from the medieval period.