Researchers from the Scientific Access to the Antarctic Subglacial Lakes (SALSA) project have found life in water samples taken from Lake Mercer in Antarctica, buried under a glacier, and represents one of the most extreme environments in the world.

The scientists managed to obtain the samples in question after drilling through more than one kilometer of thick Antarctic ice to reach liquid water.

“Early studies of the water samples showed the presence of approximately 10,000 bacterial cells per milliliter,” explained John Priscu, professor of polar ecology at the University of Montana (USA), in an interview with Live Science.

Scientists say this is a very high number for a sunless body of water located deep beneath an Antarctic Glacier. However, it is only about 1 percent of the 1 million microbial cells per milliliter.

Furthermore, discovering 10,000 bacterial cells per milliliter in the dark and deeply buried lake in Antarctica suggests that the subglacial lake may support higher life forms like tardigrades.

“We saw lots of bacteria — and the [lake] system has enough organic matter, you would think, to support higher lifeforms,” Priscu explained. 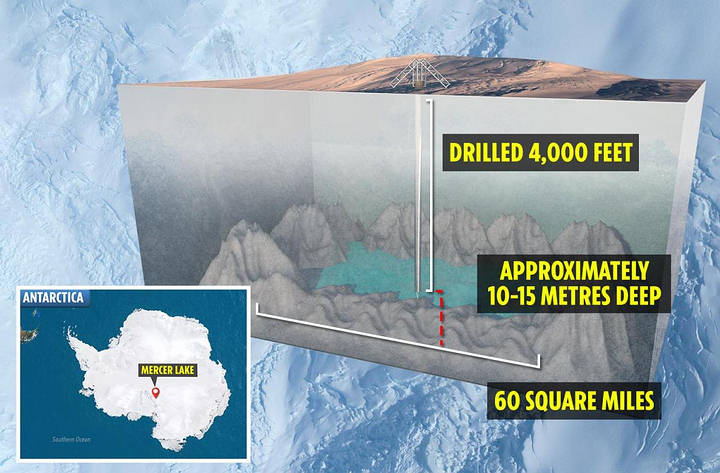 “We are really going to get a good look for higher organisms, like animals … but that won’t be done for another couple of months.”

Discovering traces of life more than 1 kilometer beneath Antarctica’s Ice complements the discovery of high traces of bacterial life found in another nearby subglacial lake—Lake Whillans—in 2013.

These findings raise hopes that similar lifeforms could one day be discovered in ‘hostile’ environments on other planets or even moons, like Europa or Enceladus.

Lake Mercer measures nearly 160 square kilometers and was discovered more than a decade ago after scientists analyzed satellite images. But despite it has been found a long time ago, the lake has never been explored.

According to experts, Lake Mercer is a hydraulically active subglacial lake, located more than one kilometer below the Whillans Ice Plain, a fast-moving section of the West Antarctic ice sheet.

It also happens to be one of the 400 lakes that lie beneath the Antarctic ice. Experts say that discovering life at such depths and in such an extreme environment could raise hope of finding similar organisms on Mars or in Jupiter and Saturn’s ice-covered moons.