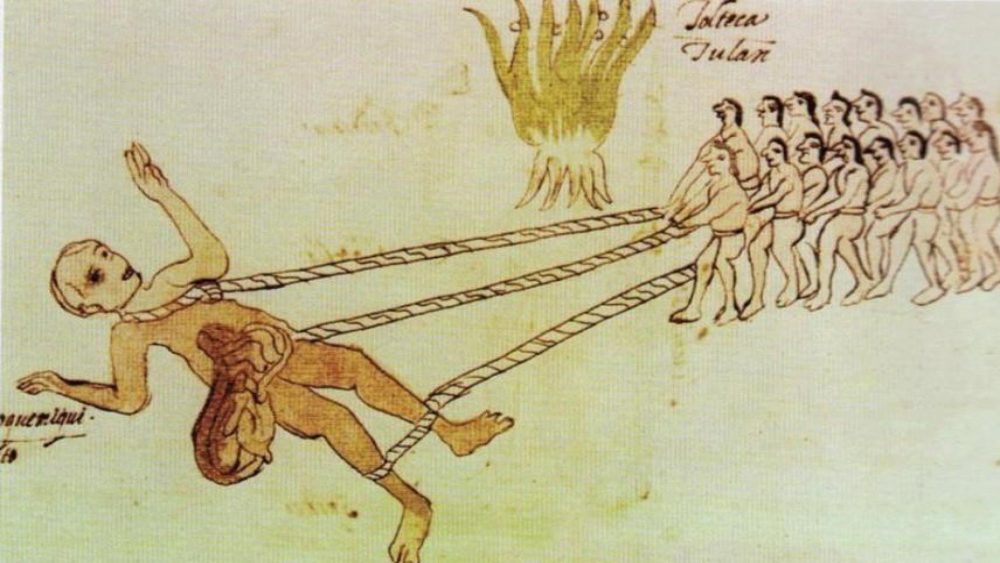 Spanish colonists claimed to have seen real giants when they invaded the Aztecs. According to ancient Aztec mythology, these "giants" were called the Quinametzin. Here's their story.

Descriptions of giants are common in religious books and historical texts around the world, including in Central America. Giants such as Goliath, Og, and Nephilim are mentioned in the Western world, and especially in the Bible, but people on the American continent have also described huge people with unheard-of power since ancient times.

It seems that evidence and legends about the existence of giants can be found all over the world. Is it really possible that in the past our ancestors coexisted with an extinct race of giants, and if so, why does this part of human history remain in the shadows? A good example of a race of giants is Quinametzin, described by both the Aztecs and their conquerors – the Spaniards.

1. An old Spanish manuscript from the colonial era called Codex Rios describes a giant named Quinametzin. He was captured by Aztec warriors.

2. Quinametzin was one of the “old ones”, a giant from a race that inhabited the world in an earlier era.

3. The Quinametzin giants did not venerate the gods. As punishment for their many sins, the gods caused severe disasters and destroyed their civilization.

4. Different versions of the story exist but the most widely accepted reason for the end of their civilization was a mighty flood similar to the Great Flood from the Book of Genesis.

5. According to legends, the Quinametzin giants founded many of the ancient cities later inhabited by the Aztec civilization, including Tenochtitlan, said to be built by the giant Tenoch.

6. According to these same legends, giants built many of the monumental Aztec pyramids including the Great Pyramid of Cholula, now believed to be the largest pyramid in the world.

7. The Pyramid of Cholula was built by the giant Xelhua, who according to mythology, escaped the flood and created his own race of men. Once the gods realized this, they tried to destroy the pyramid with fire from the sky but apart from killing many men, the pyramid withstood destruction.

8. Aztec mythology mentions 10 Quinametzin giants that were supposedly long extinct by the time of the Spanish invasion. On the contrary, Spanish conquistadors claimed they saw real giants when they invaded the Aztecs.

9. According to translated information from the Spanish invasion of the American continent, one of the greatest heroes of the Aztecs – Tzilacatzin – was also a giant. Tzilacatcin became famous during the siege of Tenochtitlan. Aztec warriors feared the Spanish soldiers, but the giant was very strong and managed to stone several Spaniards.

10. If Tzilacatzin truly was a giant, it would contradict the words written in Codex Rios that describe the Quinametzin giants and the Aztecs as enemies.

Unfortunately, much of what we know about the Aztecs, their history, and their mythology has been written by Europeans after the conquests. The Aztecs did not have an alphabet or a writing system, they used pictographs to describe events and objects. Their mythology was transmitted verbally which means that European scribers and historians had to study it based on the words of natives.

We will never know how much of what was written is true and how much was influenced by the will of the foreign invaders. In each case, legends about giants exist in almost every ancient culture and archaeology continues to find more and more evidence about their existence.

• Ancient Code. (2018, June 25). The Quinametzin giants of Aztec Mythology-Builders of the pyramid Of Cholula And Teotihuacan.
• InfinityExplorers. (2020, August 08). Quinametzin: The Pre-Hispanic giants that inhabited Mexico.
• Mexicanist. (2019, July 05). The QUINAMETZIN, the race of giants that inhabited Mexico.
• Mexicolore. (n.d.). What about the quinametzin giants in Aztec mythology?
• Michaels, D. (2020, May 27). The Quinametzin GIANTS.
• Zdeněk. (2018, February 24). Giant Quinametzin: Discovering 1995 in Central mexico: SUENEE Universe.