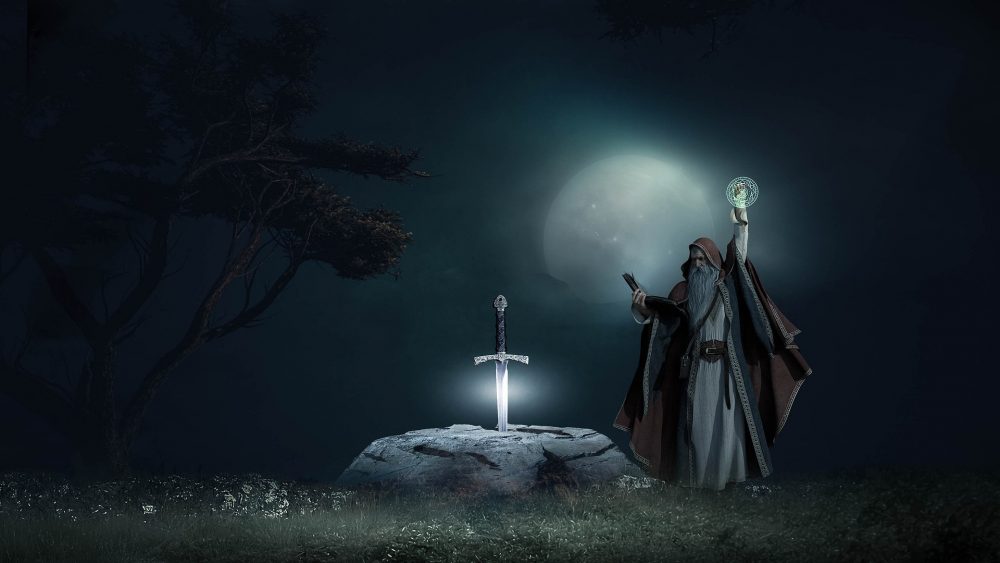 Merlin is a mythical wizard most commonly known from the Arthurian legend. Mentioned numerous times throughout history and highly popularized in modern cinema and media, was Merlin the result of a Medieval author's imagination or were the tales based on a real historical figure?

Merlin is the name of a sorcerer mostly mentioned in the various versions of the legend of King Arthur. Just like the actual mythical king, there is no historical evidence of the existence of the great sorcerer apart from ancient legends and mythical texts.

The origin of the figure known as Merlin, however, began a lot earlier in history in connection to ancient Celtic mythology. This is why we consider it important to bring up some facts about Merlin and the famous legends that go hand in hand with his name.

1. The earliest mention of the name Merlin was in 1136 by the Welsh monk Geoffrey of Monmouth, author of “A History of the Kings of Britain”

All legends of Merlin go way further back in time but the earliest documented mention of the name was in 1136.

2. According to one of the most mythical legends, Merlin’s mother fell in love with a demon who became his father

It is said that Merlin’s father was not a human being but instead, his mother fell in love with a demon and carried his son. This is where Merlin inherited his powers from.

The illustration you see above is from the 12th-century translation called Roman de Brut by the poet Wace and presents Merlin at the Stonehenge site being helped by a giant. Geoffrey of Monmouth was the first to mention that Merlin helped in the building of the monument which to me is nothing more than a popular myth. After all, Stonehenge has been dated to thousands of years earlier than the time of Merlin.

4. The sorcerer became Arthur’s mentor after his fathers’ passing

Before he was Arthur’s mentor, Merlin guided his father King Uther during his reign. Once he passed away, Merlin took Arthur under his wing and guided him throughout his path to the throne of Camelot.

5. The earliest direct mention of Merlin as Arthur’s advisor is from the 15th century

Legends and myths surrounding Merlin and Arthur were in existence for centuries but it was the English writer Sir Thomas Mallory who directly showcased them as companions. He is the main reason why the Arthurian legend gained such cultural importance in Britain.

6. It was the sorcerer that told the young Arthur to try and draw the sword in the stone often mistaken for Excalibur

On the contrary, Excalibur is a sword that Arthur obtains a lot later but according to the legends, he truly took the sword in the stone effortlessly which meant that he is the only true heir to the tone.

7. According to certain legends, Merlin had shape-shifting abilities

Shape-shifting has to be one of the greatest powers one could have. According to some of the legends, it was one of Merlin’s main abilities and he utilized it well.

8. According to other legends, he had the ability to transport himself or other objects across the country

Another one of Merlin’s famous alleged abilities was teleportation. It is said that he was able to transport himself through incredible distances or teleport certain objects. There is another controversial myth that he transported the stones that made the Stonehenge monument with his magic which, of course, is a debunked myth since the site was later dated to thousands of years ago.

9. The sorcerer was not named Merlin in the original legends but this variation became widely accepted after the popularization of the Arthurian legend

The original name given to the famous figure was Myrddin but he also received several different surnames depending on who wrote the sequential legends. For example, Myrddin is regarded as a toponym for his alleged place of origin – Carmarthen. This name, however, was often accompanied by a second name – Myrddin Wyllt (Merlin the Wild) or Myrddin Emrys (named after the Sun God worshipped by the Celts).

10. In one legend, Merlin was captured by the British King Vortigern for his special blood

I mentioned earlier that one legend suggests that Merlin’s father was a demon or in fact, the devil himself. A subsequent myth tells the story of King Vortigern who was unable to build a strong fortification to stop invaders. His magicians told him that he needed to sprinkle the blood of a fatherless youngling on the stones and only then, it would have made the structure unbreakable.

Well, word of the young Merlin reached the King and he sent his envoys to capture him. Originally, he was supposed to sacrifice the boy but when he saw that many of his prophecies came true, he left him alive.