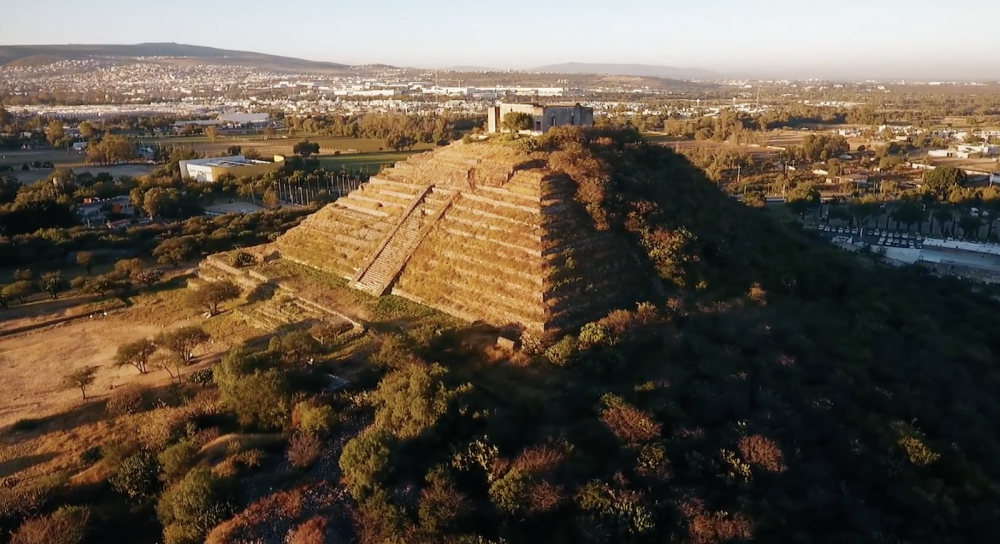 Called the Pyramid of El Cerrito (or Pyramid of El Pueblito), this ancient structure is a Step Pyramid built out of thirteen superimposed platforms.

There are thousands of pyramids scattered across the globe. Wherever we look, we will find that ancient civilizations erected these massive stone monuments throughout history.

Some pyramids are massive, and others are smaller. Some are said to mimic the stars, while others hold extraordinary secrets buried beneath them.

In a way, this is why I love pyramids so much. Many pyramids share stumping design details despite being separated by thousands of miles and built by different civilizations that never came into contact with one another.

But although many pyramids are similar, they are also very different.

Even though the Egyptian pyramids are by far the most famous of them all, this beautiful African country isn’t home to the most pyramid. In fact, just to the South, the country of Sudan is home to over 200 pyramids.

Travel to the Americas, and you will find thousands of pyramids of different shapes and sizes.

When it comes to the oldest pyramid on Earth, the consensus tells us that we must look towards the Thrid Dynast Reign of King Djoser and the necropolis of Saqqara.

It is believed that Djoser’s Step Pyramid is the oldest stone pyramid on the planet, built around 4,500 years ago.

However, although it might be the oldest in Africa, it isn’t the oldest on Earth.

According to researchers, the oldest pyramids on Earth were built in present-day Brazil by mysterious people who used seashells and other materials to create pyramid-shaped mountains atop which a temple was built.

The oldest stone pyramids of America are contemporary with the Egyptian pyramids and were built in present-day Peru by the ancient culture of Caral around 4,500 years ago.

Mexico, a wonderland of pyramids

I grew up in Mexico. In fact, I’d probably say I feel more Mexican than Croatian. I love everything about Mexico. My friends, with whom I remain in contact to this day despite not living there anymore are just one example. I also miss the food; tacos al pastor, pozole, tamales, oh…, I miss a lot from Mexico.

Mexico is a true cultural wonder, and in addition to its many gastronomical riches, it is a treasure trove of history. There are thousands of pyramids of different sizes in Mexico. Some are famous, like the pyramids of Teotihuacan or Chichen Itza, and some are less so.

There is more to Mexico than these ancient treasures. One site that not many people know of is located in the city of Queretaro.

The site where the step pyramid stands today is believed to have been founded some 3,300 years ago. The culture that constructed the pyramid flourished for two thousands years until 1,700 CE.

10 things about the El Cerrito and its Pyramid

The Pyramid of el Cerrito is one of the best examples of Mesoamerican Step Pyramids. The structure was built to resemble a mountain. The pyramid which has become overgrown by vegetation is also known among locals as El Pueblito due to the proximity to the population of the same name, whose growing demography has surrounded the site throughout the years.

There’s more to El Cerrito than just a pyramid. The area where the pyramid is located was an important political and religious center worshiped by the cultures of Chupícuaro, Teotihuacanos, Toltecs, Chichimecas, Otomíes, and Tarascos. It remained an important site all the way until 1632.

Although influenced by various cultures, El Cerrito’s area was settled in 300 BCE by the Chupícuaro. There is evidence of vast influence by the Teotihucanos and Toltec culture.

Although El Cerrito was founded 3,300 years ago, the pyramid is believed to have been completed around 700 CE, while the Toltec dominated the area.

El Cerrito and its pyramid served as the most important Toltec ceremonial center in northern Mesoamerica.

Archeological research suggests the pyramid sits on top of a large elongated platform that measures 130 meters long by 30 meters wide. The original height of the pyramid remains a mystery due to an advanced degree of deterioration.

The Pyramid of El Cerrito was built by superimposing 13 structures, one atop the other. Its builders used basalt and red sandstone for its construction. The pyramid is thought to have been vividly painted in ancient times, covered in red and ochre colors.

Although one of the most ancient pyramids in Mexico, the structures’ outer walls were not discovered until 1941 when archaeologist Carlos Margain stumbled upon the outermost parts exposed through thick layers of vegetation.

Archeological surveys of the site suggest the pyramid was built in three distinctive stages—similar to how many other pyramids across Mexico were built.

Like the largest pyramid in Mexico—The Great Pyramid of Cholula, the pyramid of El Cerrito was topped by a modern structure. In 1887, the pyramid was modified and “updated” by a fort known as El Fortín. This was the shrine of the Virgen Del Pueblito, a virgin to whom many great miracles are attributed to this day.