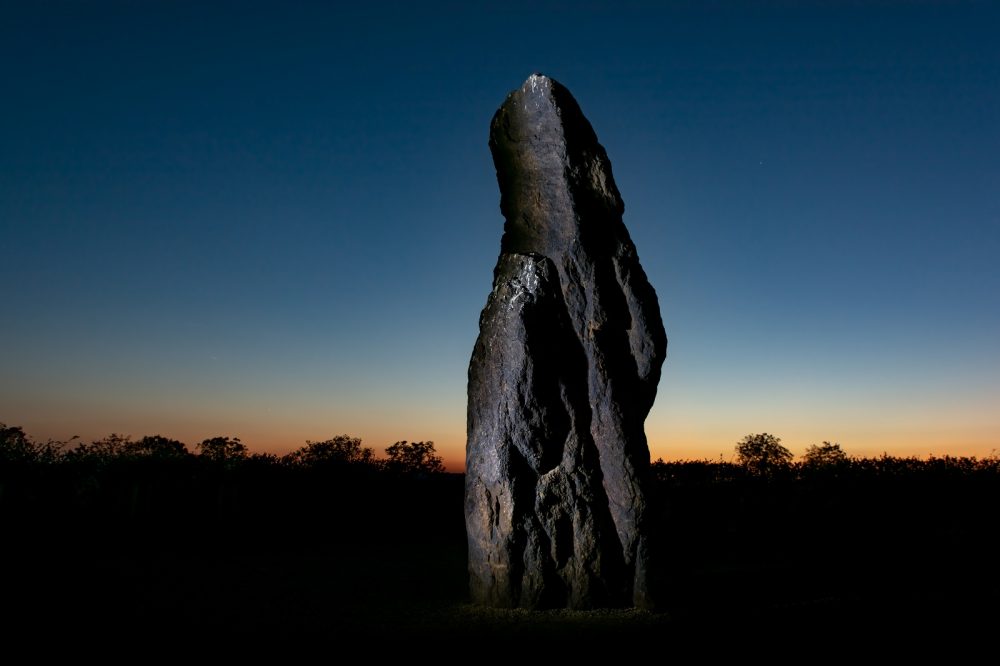 These ancient monuments can be found as either monolith–singular standing stones–or as part of a group of similar stones. Standing stones come in all shapes and sizes and can differ considerably.

Their existence has been well documented across the European Continent, Africa, and Asia. However, they are most numerous in Western Europe.

If we look at Ireland, Great Britain, Brittany, and France in general, we will find more than 50,000 examples of ancient standing stones.

There are thought to be more than 1,200 standing stones in France alone.

And since we can’t really radiocarbon date stone, it is challenging to find out how old some stones are.

Luckily, pottery fragments discovered beneath some of the massive standing stones suggest certain Menhirs can be traced back to a mysterious culture known as the Beaker People.

The Beaker is thought to have constructed many of these megalithic sites in pre-history, part of larger megalithic building civilization.

Given their size and intricate positioning, it was thought, during the Middle Ages, that Menhir and megalithic sites featuring a series of standing stones were built by giants who lived before the biblical flood.

Many of the ancient megaliths found in Europe were destroyed or defaced by early Christians, but it is estimated that some 50,000 megaliths once stood in Northern Europe, where almost 10,000 now remain.

The destruction of Menhirs is a huge loss in history since many of the ancient sites were engraved with different kinds of megalithic art. Menhirs would often become anthropomorphic stelae, although images of objects such as stone axes, plows, shepherd crooks, and yokes were seen as common symbols engraved by the ancients onto the different standing stones.

Some of the standing stones have been found to date back to around 4,000 BC, while their earliest examples exist from around 1,500 BC.

Whatever their purpose was, standing stones and monoliths were a global phenomenon.

The Callanish Stones, or Tursachan Chalanais in Scottish Gaelic, are an intricate arrangement of standing stones positioned in a cruciform pattern with a main, central stone circle.

Thought to have been erected in the Neolithic, the Callanish Stones were most likely the focus for ritual and religious activity in the region during the Bronze Age.

Located near the village of Callanish, other ancient sites are located close to the Callanish stones. Nearby, we can find other stone circles, arcs, stones specifically arranged as well as singular standing stones Menhirs. Some of them are even visible from the Callanish Site.

The most impressive examples, dubbed Callanish II and Callanish III, are located about a kilometer southeast of the main site, consisting of stone circles.

Given the sheer existence of other standing stones in the area, it has been suggested that the region surrounding the Callanish stones was central to many prehistoric ritual and religious activities that span back more than 1,500 years in history.

Unlike other standing stones discovered across Europe, the Callanish stones consist of thirteen stones arranged in a circle and a monolith standing near the center. The central stone measures 4.8 meters high, 1.5 meters wide, and 0.3 meters thick. Its largest sides seem to be perfectly oriented to the North and South. Its weight is estimated to around 7 tons. The Callanish stones have an average height of three meters, and the outer stone ring covers an area of 124 square meters.

How were these massive stones moved? Carved? Why? And by whom?

Gobekli Tepe, or “Potbelly Hill,” is a site that dates back to around 12,000 years. It is one of the most ancient megalithic sites on Earth, and we know very little about it.

What we do know is that during a time when history is telling us the region was inhabited by hunter-gatherers, one of the most complex temples the world has ever seen was erected.

The stones discovered at the site are so large that experts say they are some of the oldest and largest megaliths in history.

Around 200 stone pillars have been excavated at Gobekli Tepe until today. These 200 pillars were placed inside of 20 circles. The pillars of Gobekli Tepe have an average height of six meters and measure more than ten tons. How the site was built more than 12,000 years ago is one of the greatest historical and archeological mysteries.

The site is ancient. Radiocarbon dating, as well as comparative, stylistical analysis, suggest Gobekli Tepe is the oldest known temple discovered anywhere in the world.

The site is even of greater importance when seeing its intricately carved T-shaped stones.

In other words, Gobekli Tepe is one of the most puzzling ancient sites in the entire world. Not only because it is considered the oldest temple on the planet, but because we know absolutely nothing about the people that erected it. Nor do we understand anything as to why the ancient monument was buried in the distant past.

One of the best-known prehistoric sites in England is Avebury, and it is home to the largest megalithic stone circle in the world.

The site is believed to have been erected over several hundred years, around 3,000 BC.

The Avebury stones are made up of a central, large henge and a massive outer stone circle separated by smaller stone circles located inside the center of the site.

Like many other ancient sites, researchers have not managed to understand the exact purpose of the site, although it is estimated that Avebury was a place where the ancients would perform either religious or ritualistic ceremonies.

The site is part of a much larger landscape of older monuments.

The site itself is shrouded in mystery. The area where the monument was erected has yielded little archaeological information, and archeologists argue that evidence of human activity in the area before the 4th millennium BC is limited.

The timeline of its construction is another headache for experts. Despite this, we know that the monument was not indented as a single monument but is actually the result of a series of projects that were undertaken throughout several hundred years.

According to the book Prehistoric Avebury (Second Edition) written by archaeologist Aubrey Burl, the inner part of the central cove date back to around 3,000 BC. The inner stone circles were built a hundred years later, around 2,900 BC, the outer circle and the henge were built around 2,600 BC, while the avenues are thought to have been completed around 2,400 BC.

Given the fact that several such monuments were being built around 4,000 BC, there must have been a sustainable economy in Britain since people obviously decided to dedicate their valuable time to monument building.

As for the purpose of the site, although it could have been a kind of astronomical observatory, Burl argues that the site was where the ancients would perform rituals in order to “appease the malevolent powers of nature” that threatened their existence. Avebury is puzzling because we lack so much information about it. We can’t know for sure who exactly built it, what techniques were used, nor why it was built. And the best part is, most standing stones share those same characteristics.