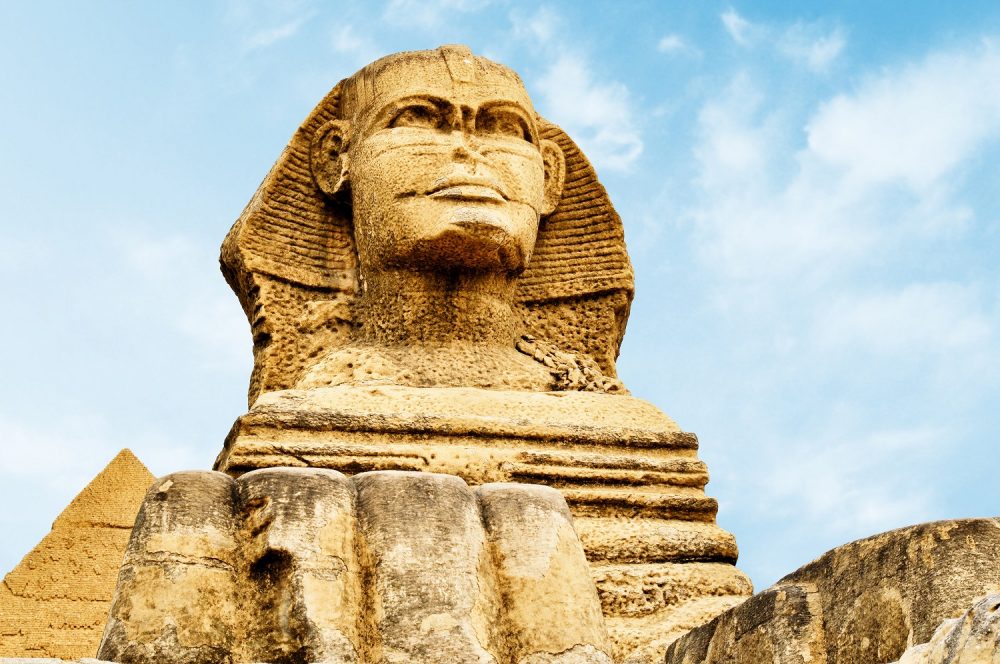 We can't even find out the original name of the Sphinx.

If there was a competition among all the ancient statues on Earth and we were to include things like the most mysterious, the oldest, the largest, the Sphinx would come out on top hands-down. That’s because the Great Sphinx of Giza is the largest, oldest, and most impressive monument ever carved by human hands.

Shrouded in mysteries, unclear origins, mythologies, and connections to worlds existing beyond our own, the Great Sphinx of Giza is a treasure trove of ancient history, standing guard not far from the Pyramids of Giza.

The Enigma of the Sphinx’s name

One of the greatest mysteries surrounding the Sphinx is its actual name. Go back in history some 2,500 years ago, and call the Sphinx the SPHINX, and people would look at you in surprise.

We call the monument the Sphinx thanks to the ancient Greeks, who related it to the mythical creature of the Sphinx: in the Greek tradition, the Sphinx has the head of a human, the haunches of a lion, and sometimes the wings of a bird. It is mythicized as treacherous and merciless.

One day, Thutmose IV napped at the paws of the Sphinx and dreamed that the ancient Egyptian God Horem-Akhet-Khepri-Re-Atum had come to him, revealing his identity as Thutmose’s father. In the dream, Thutmose IV was given instruction to clear the sand surrounding the Sphinx, and once he did that, he’d become the ruler of Egypt.

Eventually, the statue was referred to as Horem-Akhet, which means ‘Horus of the Horizon’. The ancient Egyptians also called the Sphinx “balhib” and “bilhaw.”

However, its true name remains an enigma, as there is no reference to its name prior to Thutmose IV sleeping next to it.

Who built/carved the Great Sphinx?

Another mystery surrounding the Sphinx is its origin.

But there is no evidence whatsoever to consider the above as a historical fact.

There are some scholars who argue that the Great Sphinx of Giza can be traced back to Khafre’s father Khufu and that it was Khufu who commissioned its construction.

But those are just theories, and we can’t possibly date the Sphinx, nor are there any documents that mention who built it or when.

Although the statue looks imposing and strong, there are a number of discoveries that have been made throughout the years that suggest the Sphinx isn’t actually complete.

Some scholars argue that the Sphinx was intended to be a statue much larger than what we see today and that the people who carved it did the job in a hurry.

This is hard to explain since the exact age of the Sphinx is shrouded in mystery. And given the fact that we don’t really have any ancient texts that mention when it was built, we can only speculate about its age. The Great Sphinx is, according to experts, the oldest monolithic statue carved by man. But there are Sphinx older than it.

However, according to scholars, Sphinxes depicting Djedefre and Hetepheres II are believed to be much older than the Great Sphinx of Giza, if, of course, the Sphinx dates back to the reign of Khafre.

However, the  Great Sphinx is considered the oldest and largest monolithic statue on Earth at 241 feet long and 66 feet high.

A bit confusing since we can’t really find out its true age.

The mythical chambers beneath the Sphinx

In addition to the many mysteries surrounding the Sphinx, one of my favorite ‘mysteries’ are the alleged rooms and chambers located not only beneath the Sphinx but inside it as well.

Many authors have argued that the Great Sphinx of Giza is home to massive doorways that lead into halls of forgotten history.

To see whether or not there were chambers and rooms beneath the statue, a group of scientists from the Waseda University in Japan investigated these theories of chambers, cavities, and doorways beneath the Sphinx and found that located just south of the Sphinx are hollow parts in the ground and there are cavities ranging from 2 to 3 meters inside.

Curiously, they also found a groove on the Sphinx body that extends beneath the ancient monument.

Experts from Waseda University also found that to the north of the Sphinx were similar grooves which suggest there could be a tunnel (or tunnels) that leads directly beneath the Sphinx, connecting the southern and northern cavities.