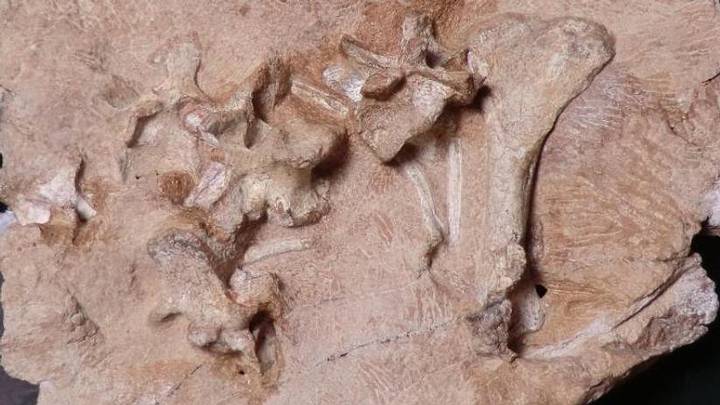 Researchers say that "the more we find out about prehistoric Antarctica, the weirder it is..."

The discovery of a ‘rare’ ancient fossil in Antarctica could help us rewrite what prehistoric Antarctica was like.

In fact, it was about the size of a modern-day iguana.

But the recently discovered fossilized remains in Antarctica tell us a lot about what the continent was like before it was covered in snow, ice, and freezing temperature.

Travel back in time some 250 million years, and you will find that Antarctica was teeming with life. All sorts of life.

It was a continent covered with lush forests, unimaginable vegetation, rivers, and lakes.

In fact, according to a new study, the recently discovered fossil is a Dino ancestor.

“This new animal was an archosaur, an early relative of crocodiles and dinosaurs,” says Brandon Peecook, a Field Museum researcher and lead author of a paper in the Journal of Vertebrate Paleontology describing the new species.

“On its own, it just looks a little like a lizard, but evolutionarily, it’s one of the first members of that big group. It tells us how dinosaurs and their closest relatives evolved and spread.”

Even though the fossil skeleton is incomplete, paleontologists still have an excellent feel for the animal. They have named Antarctanax shackletoni (the former means “Antarctic king,” the latter is a nod to polar explorer Ernest Shackleton).

Based on its similarities to other fossil animals, Peecook and the coauthors of the study (Roger Smith of the University of Witwatersrand and the Iziko South African Museum and Christian Sidor of the Burke Museum and the University of Washington) believe that Antarctanax was most likely a carnivore that used to hunt smaller bugs, early mammal relatives, and amphibians.

And while the discovery itself is truly incredible, scientists say that the best part about it is where it lived and when.

“The more we find out about prehistoric Antarctica, the weirder it is,” explains Peecook.

“We thought that Antarctic animals would be similar to the ones that were living in southern Africa since those landmasses were joined back then. But we’re finding that Antarctica’s wildlife is surprisingly unique.”

As noted in an article by the Field Museum, around two million years before Antarctanax lived, Earth underwent one of its most massive extinction events in history.

The years that followed after the mass extinction was an evolutionary free-for-all — where new groups of animals vied to fill in the gaps.

The archosaurs, including dinosaurs, were groups that experienced enormous growth and filled in the gaps quickly.

“Before the mass extinction, archosaurs were only found around the Equator, but after it, they were everywhere,” says Peecook. “And Antarctica had a combination of these brand-new animals and stragglers of animals that were already extinct in most places — what paleontologists call ‘dead clades walking.’ You’ve got tomorrow’s animals and yesterday’s animals, cohabiting in a cool place.”

Researchers say that the discovery of Antarctanax helps bolster the theory that Antarctica was a place where rapid evolution and diversification took place after the mass extinction.

“The more different kinds of animals we find, the more we learn about the pattern of archosaurs taking over after the mass extinction,” notes Peecook.

“Antarctica is one of those places on Earth, like the bottom of the sea, where we’re still in the very early stages of exploration,” says Peecook.”