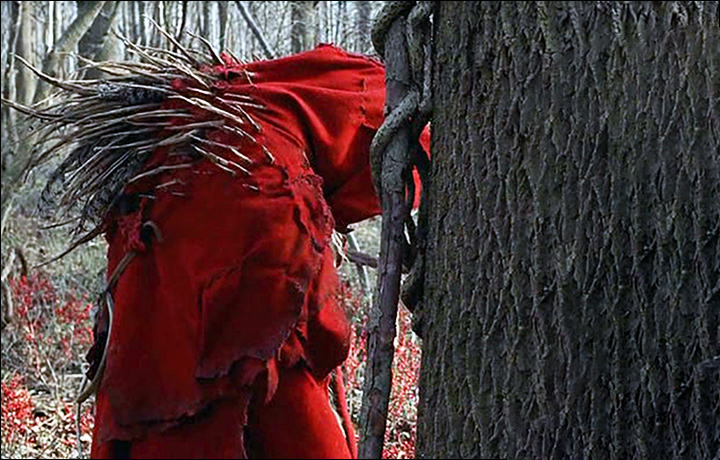 "The beaks found inside the 5,000yo burial seem to resemble those of a monster in the 2004 psychological thriller movie The Village directed by filmmaker M Night Shyamalan."

An odd but significant discovery has been made in Siberia, shedding light on the customs and religious practices of people who lived in the region some 5,000 years ago.

Archaeologists have discovered a skeleton of the Bronze Age buried with an unusual ornament: a necklace or headdress made of dozens of birds and skulls.

As noted by the Siberian Times, “The beaks found inside the 5,000yo burial seem to resemble those of a monster in the 2004 psychological thriller movie The Village directed by filmmaker M Night Shyamalan.” (Featured Image)

The mystery skeleton is believed to have belonged to an ancient Shaman of the region, who lived around 5,000 years ago.

The tomb was discovered at Ust-Tartas, in the Novosibirsk region, Siberia.

“The skulls of birds and their long beaks were arranged under the human skull as if it were a necklace,” explained Lidia Kobeleva, a researcher at the Institute of Archeology and Ethnography in Novosibirsk.

Experts remain unsure what purpose the necklace may have had, although it is theorized that it may have served as a protection in the afterlife and may have even been used for ritual purposes of the time.

There are a couple of mysteries surrounding the discovery.

Although the birds from which it was made have not yet been identified, the first estimates point to it being herons or cranes.

Furthermore, archaeologists still do not know exactly how the skulls and beaks were linked to each other or a fabric, given that at the moment, the classic holes in the bones would have served to gather all the parts of the headdress have not been detected.

Experts have also not been able to determine exactly what the birds’ skulls were joined to one another, as classical holes that would have served for that purpose have not been found during analysis.

The Siberian “Birdman” also had company.

In the vicinity of the ancient burial, archaeologists discovered two more tombs built, one on top of the other.

The upper layer of the tomb contained the bodies of two children between 5 and 10 years of age.

In the lower layer and under a wooden divider, the archeologists discovered an adult man’s skeleton.

The burials are thought to have belonged to the Odinov Culture, an early Bronze age people inhabiting Novosibirsk’s modern-day region.

In addition to the burials, archeologists also discovered several artifacts.

One of the items recovered by experts is a type of mask composed of two bronze hemispheres pierced at its center and a bronze bar.

Polished stones close to his body would be evidence that this individual – along with the “Birdman” – may have performed rituals for the Bronze Age population that they served.

Experts argue that given the type of burial and the different artifacts discovered inside them, the two individuals were most likely of great importance to society.