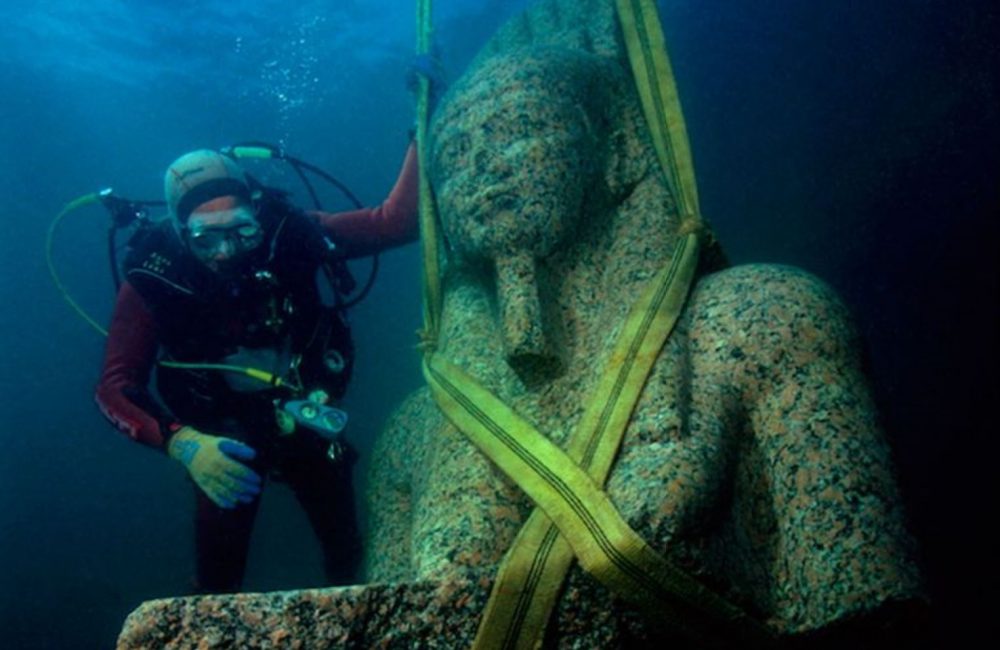 Ancient Egypt's "Atlantis" sank thousands of years ago. It remained beneath the ocean until in 1999, the French archaeologist Franck Goddio discovered it not far from Alexandria.

Tales of sunken cities, incredible civilizations, and gods walking on Earth are many. However, one of the most-searched-for ‘sunken cities’ in history is, without a doubt, Atlantis, a mythical city/state introduced to the world by ancient Egyptian priests and then shared further on by Plato in his writings.

The legend says that Atlantis was a land of wonders, full of prodigies and unimaginable technological advances. Yet, people lived there in harmony, and their might was unrivaled.

But in one day, everything changed, and the city sank into the ocean, never to be found again.

For centuries, hundreds of people have searched for Atlantis without success.

We’ve even covered a few articles in the past about people claiming to have found the sunken city.

But despite claims, this sunken city still eludes those who actively search for it.

An Ancient Egyptian city swallowed by the sea

However, in 1999, the French archaeologist Franck Goddio discovered a city thought to have been a myth. A forgotten city lost to the ocean.

That city was Thonis, or as the Greeks called it in honor of Hercules, Heracleion.

The city of Heracleion was a port city in Pharaonic, Egypt, and was of extreme importance to the kingdom.

In fact, it was in the temple of this city where new Pharaohs received the divine power of Amun that eventually legitimized their reign over the lands.

It is believed that a cataclysmic event caused the city to sink into the waters of the Mediterranean Sea in the second century BC, during the Hellenistic period, after Egypt was conquered by Alexander the Great.

Finding the city was a Eureka moment for underwater archaeology.

The discovery of Thonis gave rise to a series of invaluable findings: kilometers of houses, temples, and public buildings; colossal statues, vessels, gold, bronze, coins, and jewels; a stele older than the Rosetta Stone; and almost 70 boats among which was the first “Bari,” a type of boat described by Herodotus but considered a myth.

The ancient Egyptian Baris were huge cargo ships described by the Greek philosopher and historian Herodotus in the fifth century BC, after a visit to Egypt.

Herodotus detailed these Egyptian vessels in his work “The Histories,” the first historical chronicle of the Ancient Age.

However, as there was never any evidence of these ships’ existence, many considered it a legend.

It would take 2,500 years to prove that, in the end, Herodotus was not lying.

The bari found in the sunken city of Heracleion measured 28 meters, a huge size for the time. However, experts stress that its design was ideal for navigating this particular area of the Nile.

Among the ancient shipwrecks, the divers came across what is believed was a sacred/ceremonial barge used by the ancient Egyptians to perform religious rituals.

While there are images of these ceremonial vessels throughout Egypt, finding one in real life was rare.

In fact, this is the only sacred barge that was found during this period.

Experts believe it may have been used as part of a ceremony to celebrate the god Osiris’s resurrection.

Another finding that caused amazement in the scientific world was discovering a black granite stele more than two meters high, covered with hieroglyphics.

It is a stele believed to be older than the famous Rosetta Stone, which allowed scholars to decipher and translate ancient Egyptian hieroglyphics.

The stele discovered submerged underwater was excellently preserved despite being more than 2,000 years old.

All of the discoveries made at Heracleion point to the fact that the city was of great importance, both in a commercial sense and politically and religiously.

Carved on the massive stele, the researchers discovered a description of the dynastic rights that each Pharaoh had to perform to legitimize his power.

Each new Pharaoh had to enter this temple to receive from the supreme god, Amon, the title of his power. It was revealed.

But despite its great importance, nothing could be done to prevent the city from sinking. Experts say it is mostly because the city was built on unstable sediments of the Nile delta, which may have been compromised during an earthquake or another natural disaster.