As Best Selling Author Graham Hancock has said, we are a species with amnesia. And most scholars would agree with that quote.

For as long as the human race has existed, we have tried to understand our origins and life meaning. But the more we search, the more we know how little we know about our origins.

Did humankind originate on one continent and spread across the world later? How did humans evolve? How come there are so many gaps in human history? And where are we going as a species?

However, thanks to countless archeological discoveries made across the world, we are beginning to understand humankind’s history is far more complex than we ever imagined.

Evidence of our history’s complexity are the many archeological discoveries that have been made throughout the centuries that point towards a complex species that achieved unimaginable things.

The Underground City of Derinkuyu.

Located in Turkey, this mind-bending underground city was excavated and built thousands of years ago.

It is a fascinating achievement of ancient engineering and skills.

Somehow, the ancients managed to excavate several hundred meters into the Earth’s surface, building what is now considered the largest underground city on the planet.

The city’s history and origin are shrouded in mystery, and no one has been able to explain why or how the city was built fully.

Some experts have theorized the city was built to protect ancient people from climate change.

The Longyou Caves are a series of artificially carved caves that date back more than 2,000 years.

The caves are one of the largest structures ever excavated by human hands.

First discovered in 1992, 24 caves have been found to date, one of which has been developed as a tourist attraction.

Interestingly, to date, not a single historical record has been found that details or explains the monumental construction process that involved removing more than 1,000,000 cubic meters of rock.

This Earth has some massive balls. No, really.

Giant stone spheres have been discovered on several continents. Costa Rica is home to the largest number of stone spheres, although reports of their existence have been documented in Europe and other parts of the planet.

The stone spheres were discovered for the first time in 1930 when construction workers were clearing the jungle to build a banana plantation.

No one quite understands why the spheres were built and what their true purpose is.

The Great Pyramid of Giza and its ability to produce ENERGY. Not a conspiracy but a proven fact.

The great pyramid of Giza is one of the most impressive structures ever built in ancient times. It is the only standing ancient wonder, and it is a monument that has survived the test of time.

Built thousands of years ago using known construction methods, to date, we still have no idea what the purpose of the Great Pyramid was. Some suggest it was built as a tomb, although no evidence to support this theory has ever been found.

Some things were built by ancient civilizations; other stuff was found lying around. There’s a mysterious massive rock in Saudi Arabia that’s unlike anything you’ve ever seen. It seems to be split in half with laser-like precision. Although its split in half, it appears to be perfectly balanced and features intricately carved symbols on its surface. It’s called the Al-Naslaa monolith.

Mohenjo-Daro was discovered in 1992 when Indian archeologist R. Banardzhi found the ancient ruins on the banks of the Indus River. Built around 2500 BCE, it was one of the largest settlements of the ancient Indus Valley civilization and one of the world’s earliest major cities, contemporaneous with ancient Egypt, Mesopotamia, Minoan Crete, and Norte Chico.

Its level of development was beyond anything that existed at the time.

A catastrophic event of epic proportions supposedly destroyed the city, and as the History Channel’s series Ancient Aliens suggests, Aliens may have aided the destruction of the city.

But if tales of aliens destroying cities may not have sounded bizarre, check this out.

In 1972, researchers exploring Africa discovered what was later confirmed to be a 2-billion-year-old Nuclear Reactor. It wasn’t made by aliens or prehistoric 0Einstein’ civilizations but rather by mother nature. You can read more about the natural nuclear reactor here.

There is a prehistoric site in Siġġiewi, Malta, near the Dingli Cliffs called Misrah Ghar il-Kbir, known for a series of curious ‘tracks’ embedded in the stone.

Dubbed by experts “cart ruts,” – they are a complex network of tracks gouged in the rock.

The age and purpose of the tracks are uncertain.

Most archeologists presume that the site developed about 2000 BC after new settlers came over from Sicily to start the Bronze Age in Malta. But other experts such as Russian Geologist Dr. Alexander Koltypin suggest the mystery tracks could be millions of years old and even evidence of advanced ancient civilizations that existed on Earth before written history. 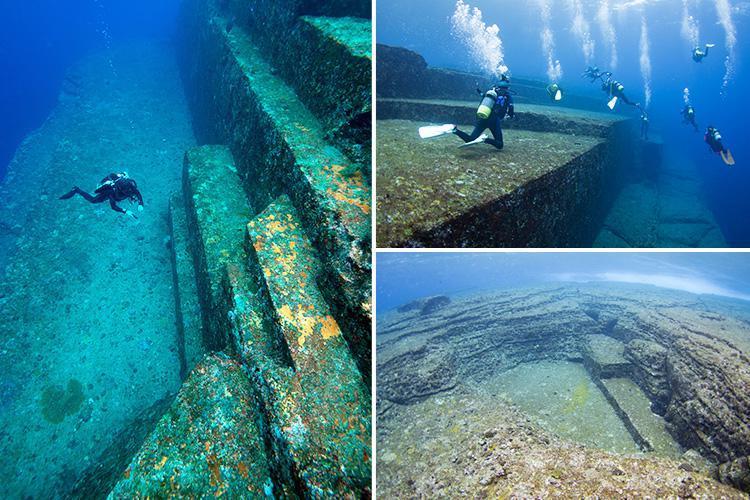 There’s a mysterious underwater monolith near the coast of Japan that some have dubbed Japan’s Atlantis. Referred to as the underwater monument of Yonaguni, the submerged structure resembles a massive submerged pyramid.

The alleged structure was discovered for the first time by scuba instructor Khachiro Arataki.

Some experts argue that the structure which is now submerged is evidence of complex civilizations inhabiting our planet before the last ice age.

And among bizarre stories of aliens, natural nuclear reactors, and pyramids that generate electricity, we’ve got a massive ‘knife’ supposedly discovered by divers underwater.

Not much can be said about the image and its content. It appeared on social networks (Facebook, Reddit, Pinterest) and shows three divers apparently holding what seems to be a gigantic knife-like object. Some argue it’s fake; others say it’s not and point out that artifacts like this one force us to rethink our understanding of humanity’s long-lost history. 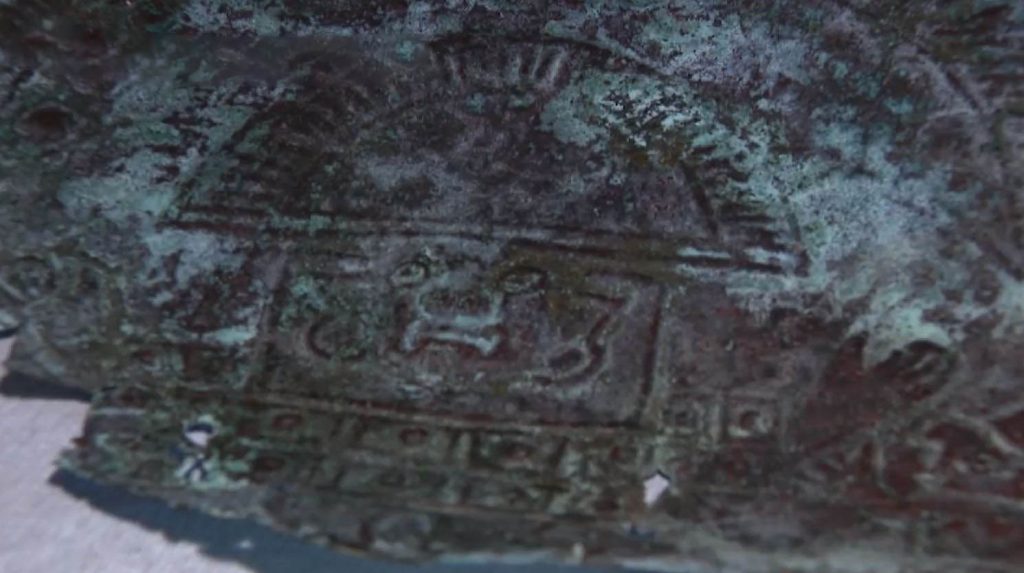 A Rare Mask made out of ‘Alien’ Metals was discovered off the coast of Florida.

According to experts, it dated back at least 10,000 years and was built in South America using a rare combination of metals, of which the most interesting one is Iridium.

The mask is thought to have been one of the many artifacts transported from South America to Europe. But the ship that was carrying the objects sank near Florida.

The mask was most likely stolen thousands of years ago by Spanish tomb raiders.