No matter the question, apparently the answer is ALIENS.

In recent years, a lot of people have become convinced that thousands of years ago, perhaps even before written history, aliens visited Earth and played a huge role in the development of our species.

This theory, made popular by the History Channel, argues that aliens have been in constant contact with Earth, and helped forge mankind into the society we are today.

Although there are no scientific grounds to support these ideas, people continue believing and argue that some structures, like the Great Pyramid of Giza, must have been built with the help of technology far superior to what was available to mankind at the time the pyramids were built.

The Great Pyramid of Giza is one of the most amazing and astonishing structures ever built. And it is partially because of its greatness that some people have claimed mankind could not have built it.

The monument, most likely built more than 4,500 years ago was built at the Giza plateau, together with a set of other equally incredible structures.

So, why do people think aliens played a huge role in the building process of this structure?

The Great Pyramid of Giza is home to numerous mysteries. As noted by Hazel Muir in a New Scientist article, the Great Pyramid’s axis aligns with Earth’s true north with an ‘accuracy of 0.05 degrees’.

Experts thought the ancient Egyptians might have watched a single star circle this imaginary point and aligned their pyramid with the circle’s center. Alternatively, they might have measured north by tracking the path of the Sun. Either way, the accuracy with which they mastered this should have been about the same during the entire pyramid-building period.

The structure is the only eight-sided pyramid on Earth.

All other pyramids are built with four main sides.

The Great Pyramid of Giza, on the other hand, has eight sides. This strange phenomenon is visible from the sky and noticeable during dawn and sunset on the spring and autumn equinoxes, as the sun casts shadows on the pyramid.

A Long-Standing Structure. Unlike many other structures which have crumbled down, surrendering to time, the Great Pyramid of Giza has remained standing for thousands of years. This means that whoever built it made sure the monument would stand the test of time.

The Great Pyramid’s cornerstones have balls and sockets built into them which means that the structure could withstand powerful earthquakes.

Orion’s Alignment. Another reason why some people say that the Pyramids are connected to aliens is because of the alleged connection the three main pyramids at Giza have with the three main stars in the constellation of Orion.

Even more fascinating is perhaps the fact that scholars have determined that once the pyramid was built, more than 4,500 years ago, it was located at the exact center of the land mass on Earth. How on Earth did the Egyptians know where to place the pyramid, if they could not fly, ask people who support the Alien theory.

Despite being built as a tomb, no one has ever found a mummy inside the Pyramid. This fact has led many people to believe that the Great Pyramid of Giza, as well as its accompanying pyramids,  were not built as tombs but rather something else. What that ‘something else’ is, remains a mystery.

The Summer Solstice sunset appears in the middle of two pyramids at Giza. That’s another incredible feature of the Giza Pyramid Complex. During the summer solstice, in the evening, and when viewed from the Great Sphinx, the sun sets in between two of the largest pyramids at Giza. 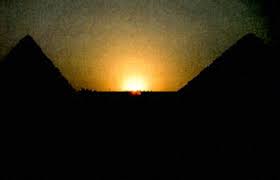 For the Egyptians to be able to create this structural alignment, they must have known that the day of the summer solstice, and also the exact length of the year.”

Surely it must have been… aliens?

People argue that Aliens played a huge role in building the pyramids because of the strange internal structure of the Great Pyramid. The Great Pyramid is the only pyramid in Egypt that was built with descending and ascending inner passages. Scholars aren’t really sure how these passages were built, nor what their exact purpose is.

Even more fascinating is the fact that as many as 5.5 million tons of limestone, 8,000 tons of granite (imported from Aswan, not Mars), and 500,000 tons of mortar were used in the construction of the Great Pyramid.

13 The Egyptians could not have built the Great Pyramid themselves apparently because the outer mantle of the structure was composed of 144,000 casing stones, all of which were highly polished and flat to an accuracy of 1/100th of an inch. Thank you, aliens, for polishing out the stones. 👌

And one of the most recent discoveries about the Pyramid proves that this magnificent ancient structure can focus electromagnetic energy. Using calculations, the researchers demonstrated that in the resonant state, the Great Pyramid was able to concentrate electromagnetic energy inside its chambers but also well beneath its base, where an unfinished chamber is located.

Does all of the above really mean that aliens did have something to do with the building of the Pyramid? Not really. It actually only proves that there’s so much more we have yet to learn, not only about the pyramids but ancient civilizations in general.

It seems that we credit our ancestors far too little while giving credits to aliens, which have still not been found, despite decades of search.

So what makes more sense? That undiscovered alien species came down to Earth, and build… pyramids? Or that our ancestors were much more advanced than we are willing to accept, and accomplished incredible things thousands of years ago?