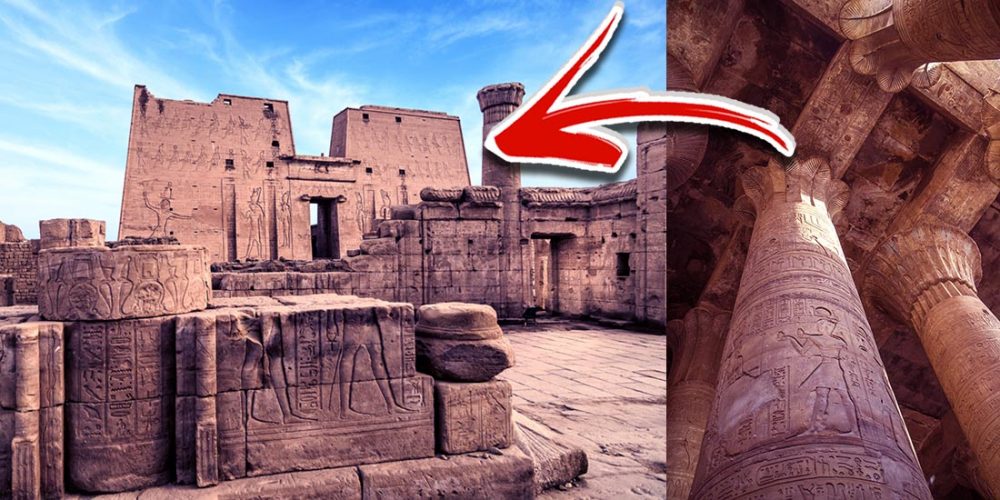 Home to vast chambers, built under gigantic gateways walking through the temple is a step towards traveling back in time, some 2,000 years when ancient Egypt flourished with massive monuments that speak of is greatness.

The Temple of Edfu is an ancient Egyptian temple located on the west bank of the Nile in the city of Edfu, known during the Greco-Roman period as Apollonopolis Magna, after the chief god Horus, who was identified as Apollo by the Greek.

It is the second largest temple in Egypt after Karnak and one of the best preserved.

The temple, dedicated to the falcon god Horus, was built during the Hellenistic period between 237 and 57 B.C.

The temple of Horus at Edfu is home to one of the amazing pylons of all the ancient Egyptian temples, 37m high and intricately decorated with battle scenes, representing King Ptolemy VIII submitting his enemies before the god Horus.

The temple is also home to a large open courtyard that features massive columns decorated with floral capitals. Its dubbed as the court of offerings.

The temple of Horus, like many other ancient Egyptian temples, also has a hypostyle hall that is home to 12 columns to support the roof.

The inscriptions on its walls provide important information about the language, mythology, and religion during the Greco-Roman world in Ancient Egypt.

In particular, its inscribed texts on the construction of the temple “provide details of its construction and also preserve information on the mythical interpretation of this and other temples such as the Island of Creation.”

There are also “important scenarios and inscriptions of the Sacred Drama. that related the ancient conflict between Horus and Seth.”

The temple’s construction began “on August 23, 237 BC, was initially composed of a vestibule with pillars, two transverse vestibules and a sanctuary surrounded by chapels.”

The temple was built on the site of an older and smaller temple, also dedicated to Horus, although the previous structure was oriented east-west instead of north-south as it is today.

A ruined pylon is located just east of the current temple; inscriptions have been found showing a construction program under the reigns of the New Kingdom Ramses I, Seti I and Ramses II.

Currently, the temple at Edfu is almost intact and is one of the best-preserved examples of an ancient Egyptian temple.

The archaeological importance and the degree of preservation of the temple have made it an important tourist attraction in Egypt and a frequent stop for many ships that make cruises along the Nile River.

The temple’s magical sandstone walls are covered in supermassive hieroglyphics and breathtaking friezes that proudly show off the ancient Egyptian history.