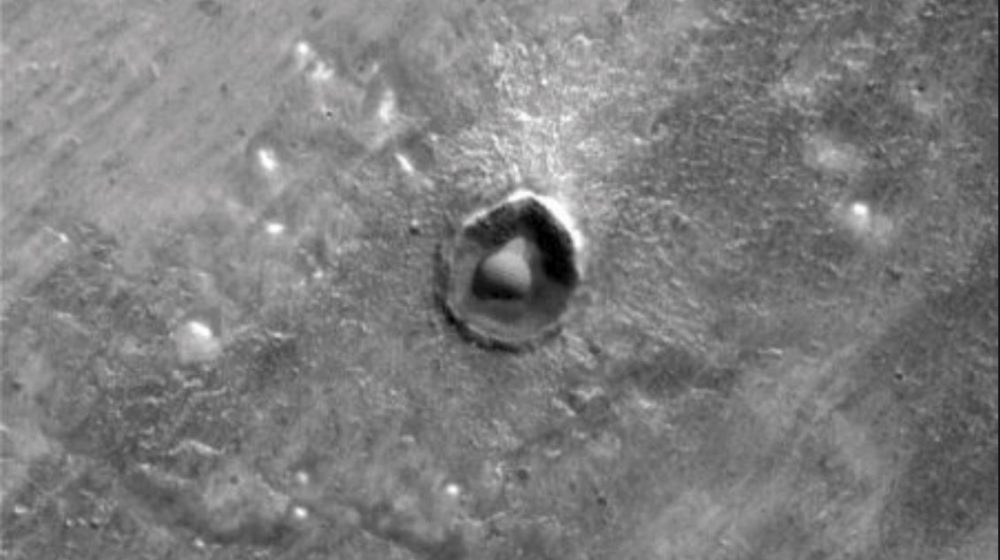 There are many fascinating surface features on Mars, but just because some of them are odd and reminiscent of "artificially made" objects, it does not necessarily mean it was aliens.

The Mars Global Surveyor (MGS) was launched into space and on its journey towards Mars in November of 1996.

It was sent in orbit around the red planet to map Mars and examine it from orbit, from the ionosphere down through the atmosphere to the surface.

The MGS completed its primary mission in January 2001 and was in its third extended mission phase when, in November 2006, the spacecraft failed to respond to messages and commands.

Despite losing communications, scientists detected a faint signal coming from the spacecraft three days later, suggesting that it had gone into safe mode.

NASA attempted to contact the spacecraft on numerous occasions and solve any issues but failed.

The spacecraft, fabricated by Lockheed Martin, carried on board five scientific instruments.

In the middle of a Martian crater, the spacecraft identified a strange, nearly perfect sphere-like object.

And while some could easily scream out aliens, the truth behind this object may be much less dramatic.

While countless strange objects have been photographed on Mars, most of them result from pareidolia, the tendency to interpret a vague stimulus as something known to the observer like seeing shapes in clouds or hearing hidden messages in music.

One such claim was made in 2017 when an alleged cannonball was discovered on Mars.

The object, photographed by the Curiosity Rover, quickly became a UFO sensation on the internet.

Sitting there, in the middle of the Martian landscape, was a perfect sphere.

It looked like someone had forgotten a bowling ball on Mars.

But not, the object was not the remnant of an ancient Martian bowling ball, but the result of concretion, as the team behind the Curiosity Rover explained on Twitter.

Mars may be named for the god of war, but these weird things aren't cannonballs. They're pebbles.

Nonetheless, a plethora of similar objects have been found sitting on Mars.

And while some may believe these ‘artifacts’ are the only thing left behind by a Martian civilization, nearly all of them can be rationally explained. That doesn’t mean they aren’t fascinating, and we shouldn’t take a closer look.

The image in question, for example, is fascinating for a few reasons.

First of all, it’s hard to tell what exactly it is until we actually analyze it up close.

While it could be the result of concretion, the object is located inside what seems to be an impact crater.

Furthermore, the region where the ‘sphere’ is located has a few more ‘similar’ surface features, and the image “m1501228e” shows us just that:

So, are we looking at concretion on Mars?

Per definition, a concretion is a hard, compact mass of matter formed by the precipitation of mineral cement within the spaces between particles and is found in sedimentary rock or soil.

The image “M1501228a” can be explained as a concretion because these are often ovoid or spherical in shape, although irregular shapes also occur.

However, whether it is concretion what we see in the above images remains a mystery waiting to be cracked. The dome-like structure surely is odd, and it reminds me of a similar feature found on Earth, specifically in Siberia.

Called the Patomskiy crater, it features a massive sphere-like object at its center.

What exactly caused the above crater remains a scientific mystery experts have not been able to answer.

But let’s get back to Mars and its mysterious spheres.

Small hematite concretions, dubbed “blueberries,” have been spotted by NASA’s Opportunity rover in the Eagle Crater on the red planet:

Concretions can occur in numerous shapes and sizes.

Some can be very small, having only a few millimeters, while others can be several meters across.

Here is an example of concretions on Earth:

Another example are the Moeraki Boulders from New Zealand:

But image M1501228a does stand out from the above examples, and it’s strange because of its almost perfect spherical shape.

Of course, the fact that its located on an alien world makes it even more specific.

Another ‘spherical mystery on Mars’ was spotted by the Opportunity rover in 2012.

After having photographed the so-called spherules on Mars, the rover an image of the Martian surface that puzzled researchers.

The mystery objects were spotted concentrated at an outcrop called Kirkwood on the western rim of Endeavour Crater. Interestingly, they differ in several ways from iron-rich spherules nicknamed “blueberries,” the rover found at its landing site in early 2004.

“This is one of the most extraordinary pictures from the whole mission,” explained Opportunity’s principal investigator, Steve Squyres of Cornell University, back in 2012.

As explained by scientists, the spherules at Kirkwood in 2012 do not have the blueberries’ iron-rich composition. They also differ in concentration, distribution, and structure. Furthermore, it has been noted that some of the spherules in the above image have been partially eroded away, revealing concentric internal structure.

This means that despite knowing a lot about Mars, we still have many things to learn.

Mars is not Earth, so we should understand that from time to time, we will find things that are out of place and beyond current understanding, although that doesn’t mean that eventually, we will crack all of the red planet’s mystery.

For now, let’s sit back and enjoy the fact that Mars is a planet shrouded in Mystery.