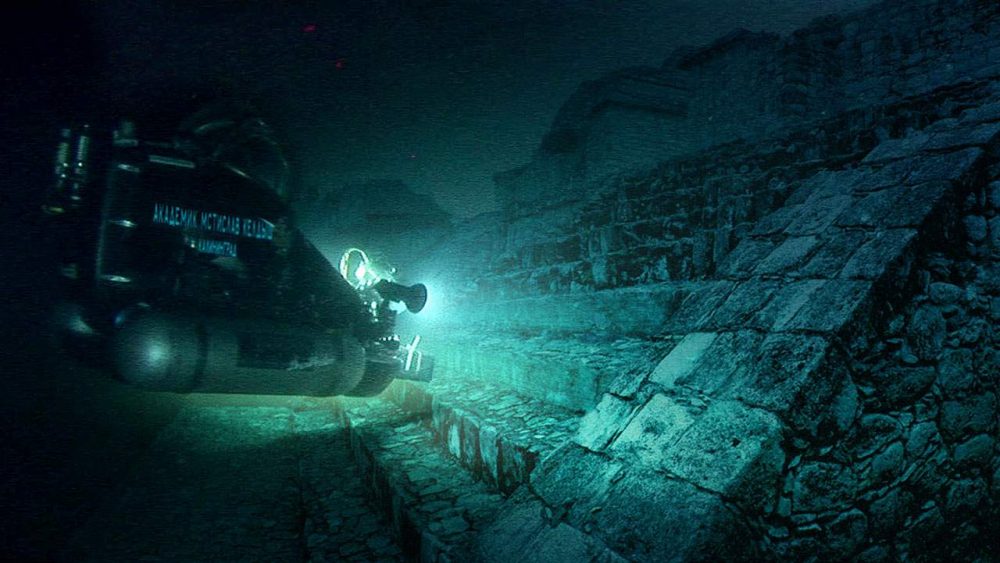 The discovery made worldwide headlines, but now no one seems to be talking about it anymore.

Pyramids have been built in nearly all corners of the world. Thousands of years ago, ancient cultures erected pyramids of all shapes and sizes. Some of them remain standing today, others are shrouded in myths, and some of them have disappeared from the face of the planet.

A few years back there was news about a massive discovery near the Azores Islands coast.

News reports had suggested that underwater explorers found a pyramidal-shaped structure several meters high, with a base of around 8,000 square meters.

Given the nature of the alleged discovery and the fact that somewhere there, “…beyond the pillars of Hercules…” Plato said Atlantis sank thousands of years ago, the idea of Atlantis being more than just a myth sprung back to life.

Plato described Atlantis disappearing in a single day and night, swallowed by the ocean, directly there where the Azores stand today.

“Through violent earthquakes and floods, in a single day and night of misfortune … [the whole race] … was swallowed up by the Earth and the island of Atlantis … disappeared into the depths of the sea.” – Plato.

The supposed underwater structure was found just off the Islands of São Miguel and Terceira in the Azores.

The man who discovered the structure, according to Portuguese media, was Diocleciano Silva. The story goes that whilst on a fishing trip, Silva stumbled across what seemed a perfectly-shaped structure sing the ship’s bathymetric equipment.

Bathymetric equipment is the underwater equivalent to hypsometry or topography.

The discovery was even aired on TV.

“The pyramid is located at around 40 meters beneath the surface between Sao Miguel and Terceira Islands,” a report explains in a video that’s been uploaded to YouTube. “It has a base larger than a football field.”

Diocleciano Silva, who made the discovery, said in an interview that “the structure’s form was impressive. It was a perfect pyramid.”

“It’s amazing because it forms a perfect pyramid. Moreover, orientation, deployment of the pyramid: the vertices are oriented north and south, just north and south, such as the Giza pyramids in Egypt,” Silva told the Portuguese news website, Terra.

Given the pyramid’s accuracy and positioning, Silva does not believe that the structure is a natural formation.

Despite the attention that the story received around the world, the structure remains a mystery.

The supposed pyramid’s age is between 12,000- and 20,000 years old, dating back to the end of the last Ice Age. How this age was obtained remains a mystery.

The Portuguese navy has dismissed the alleged pyramid’s existence as a ‘seamount’ based on some old sonar readings of the area. Still, no one has actually traveled to the site to investigate what exactly was identified tens of meters beneath the ocean.

In a rare interview a few years back about the alleged structure, Admiral Fernando Pires, commander of the Maritime Zone of Azores, said there wasn’t enough information about the structure at this time to say what exactly it is.

“At the time, we seek probes that could constitute a danger to navigation and found nothing,” he told Sapo.

As noted by the IBT, Pires explained that “the navy has not ruled out the idea that the pyramid could have been formed by a volcanic eruption – the archipelago of the Azores is composed of volcanic islands.”

No historical evidence whatsoever suggests that the Azores or the nearby area harbored a pyramid-building civilization.

Despite this, the website of the alleged Azores Pyramid (which has not been updated in quite a while) indicates states that “archeologists from the Portuguese Association of Archeological Research (APIA) have identified archeological evidence on Pico island that supports their belief that human occupation of the Azores predates the arrival of the Portuguese by many thousands of years.”

Archaeologists exploring the Azores islands have uncovered the remains of an epigraph from Roman times, Carthaginian sanctuaries, cave art, as well as megalithic structures.

But given that nothing has been heard of the alleged discovery in recent times, we can only conclude that the supposed structure, once called out as a history-changing discovery, is nothing more than what the Portuguese Navy initially said: an oddly-shaped seamount.