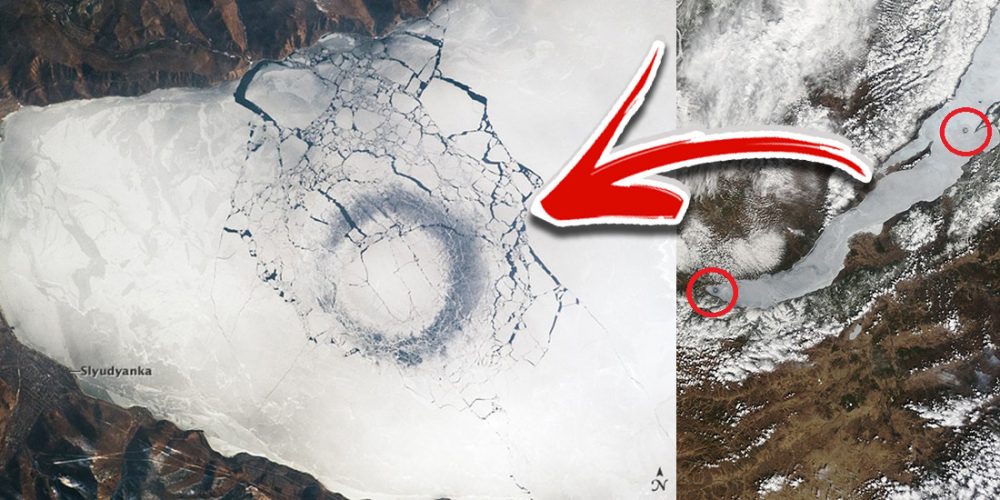 Lake Baikal, located in southern Siberia is home to countless mysteries. In April 2009, astronauts aboard the International Space Station observed strange, massive circles appearing on the surface of the lake. As explained by NASA, the origin of the circles is unknown.

Lake Baikal is the deepest freshwater lake in the world and one of the most mysterious destinations on the planet.

During the cold months, the lake freezes completely and becomes a huge ice rink by which one can travel even by car.

The crystalline ice of the Baikal, only adds to the already fascinating legends that surrounding this enigmatic body of water, located deep inside southern Siberia.

Having that said, we can agree it has quite a stunning resume.

But in addition to all of its natural beauties, the world’s largest and oldest lake is home to countless mysteries.

Since ancient times, Lake Baikal has been known as a deeply mysterious place, but in the final years of the Soviet era, and ever since the lake and its surrounding region have been the source of a number of alleged UFO and Alien sightings and the lake has become a UFO hunting hotspot.

According to reports, the Soviet Era sightings were covered-up by the authorities of the USSR, but later they were revealed by the Russian media.

In modern times, it has been reported that mysterious lights, fast-moving objects, and strange sounds have been seen and heard at Lake Baikal.

Some locals have even claimed to see large ‘spaceships’ hovering over the lake’s stunning, magic expanses.

One of the most enigmatic UFO cases of Lake Baikal, as reported by the Siberian Times, occurred at Kurma, Irkutsk region, on 17 April 1987, as told y Valery Rudesntosv, a local resident of a village near Lake Baikal.

There was 13 of us. At about 12.20am, one of our guys went out into the yard, a few seconds later runs, and calls all of us out. He stood in the center of the yard and pointed his finger at the sky.

“Diagonally from his gesture – 150 meters above us –  hung a huge flying saucer. From the center of the plate went a phosphorescent purple ray. And at the edges of the plate were yellow portholes, almost like in our rural houses. The diameter of the plate was 70 meters. We saw it so clearly and for a long time, someone even suggested he throw a stone at it … ”

“The weather was amazingly quiet, no sound was heard from the hanging saucer, although behind us was the village of Kurma – there was the noise of a dog barking, the lowing of cows. We were spellbound.”

“It was a full moon and the visibility was so clear that no one of us could doubt the reality of what we saw. And then the plate slid smoothly away, sailed along the shore of the bay and further slipped into the hills of Olkhon. Neither before nor after have I ever met such a thing. But since that time it has been a kind of sacrilege to me – not to believe in UFOs. My friend Alexander, a hunter, and his colleagues who lived there for 20 years, often see UFOs – and all is fine, he is still alive. So, if to speak about glowing balls or ‘cigars’, we constantly see these on the shores of Lake Baikal. They exist.”

But not only have local residents reported seeing mysterious ‘spacecraft’, it is said that the military also investigated the depths of the lake for ‘strange activity‘.

In fact, it is reported that in 1982, seven military divers went to investigate the lake, and discovered strange activity only a few dozen meters beneath the surface.

As told by historian Alexey Tivanenko, at a depth of around 50 meters, they met ‘swimmers’ around three meters tall, dressed in strange suits. They did not seem to wear diving gear, just helmets on their heads. The military divers allegedly pursue the creatures but eventually gave up. The Government has denied that this ever happened.

In 1977, researchers V. Alexandrov and G. Seliverstov, explored the depths of Lake Baikal in a submersible device reaching a depth of 1200 meters where they supposedly observed ‘strange lights‘. At one moment, after a powerful beam of light appeared in the distance, their submersible supposedly was left without power. Once the mystery light disappeared, they regained power and were able to return to the surface.

And despite the fact that these stories may be nothing more than just that, ordinary stories, declassified Soviet era Documents have revealed a compilation of strange accounts and UFO-related incidents.

One account describes how in 1958, a Russian TU-154 fighter crashed into the lake after supposedly being chased down by a UFO.

But perhaps the best UFO stories come from the local fishermen of the area, who have spent decades sailing the lake, indicating that strange lights above the lake are an ordinary occurrence. Some even say that disk-shaped objects regularly erupt from below the depths of Lake Baikal, only to shoot into the sky above.

And even without aliens and UFOs, the lake is stranger than strange.

In 2011, the boat Yamaha departed from the village of Kabansk with four experienced crew members on board.

It is believed that the sailors set out to test a new boat engine. Shortly after leaving the shore, as they entered Baikal’s creepy fog, contact with the sailors was lost. The boat was supposedly well within cellphone service distance, but none of the sailor’s phones had signal. The boat disappeared, almost as if was swallowed by the lake.

Search and rescue operations set out to find the missing ship and sailors never found any traces of them.

What exactly happened to the Yamaha and the sailors on board remains a mystery.

But the stories of objects ‘appearing out of nowhere’ can be explained by powerful mirages.

As explained by Pravda.ru, Lake Baikal has ideal conditions for mirages created by warm air over the chilled water in summer, and clear atmosphere and extreme cold in winter. In the layers of air of different density, the light rays are refracted, distorted, and produce fantastic forms.

Astronauts and Cosmonauts onboard the International Space Station have reported seeing gigantic circles on the lake’s surface, clearly visible from space.

And while the origin of the circles is unknown, the peculiar pattern suggests convection (upwelling) in the lake’s water column. Ice cover changes rapidly at this time of year.

So, what on Earth can cause convection, bringing warmer waters to the surface?

As noted by NASA, hydrothermal activity and high heat flow have been observed in other parts of the lake, but the location of this circle near the southern tip, over relatively deep water, is puzzling.