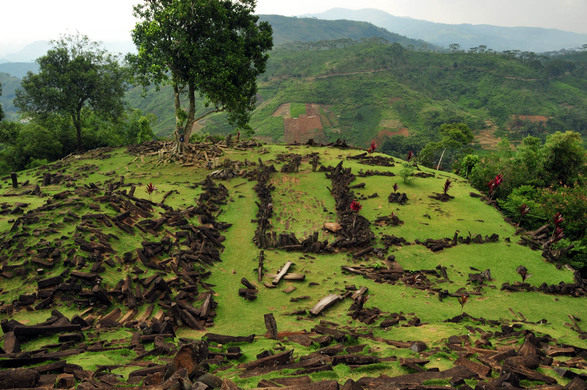 ''People think the prehistoric age was primitive, but this monument proves that wrong.''

Indonesia is home to a massive hill covered in a strange mess of ancient stone columns. And while the surface covered in massive stone blocks is remarkable to see, what lies beneath could change the way we think about pyramid-building civilizations. At least this is what Indonesian experts are proposing.

Referred to as the largest megalithic site in Southern-east Asia, initial tests have pointed to the possibility that the structure itself is extraordinarily old.

It is believed that the ‘pyramid’ located beneath the hill was erected in four different eras.

The site was mentioned of the first time in Rapporten van de Oudheidkundige Dienst (ROD, “Report of the Department of Antiquities”) in 1914, after which Dutch Historian mentioned it in 1949.

Scientific surveys in recent years have revealed that there is a large structure below the surface; a core tone site area has been confirmed; a number of different man-made artifacts have been recovered from the site; the construction of the structure spans at least four eras.

Now, a new–somewhat controversial–study presented at the AGU 2018 Fall Meeting in Washington, DC, suggests that Gunung Padang may be the oldest known pyramid-like structure on the surface of the planet.

A team of Indonesian scholars presented data, making their case that the site is, in fact, one of the oldest structures in Southern-east Asia, as well as one of the earliest examples of Pyramid-building.

Their research has been conducted over the course of several years, and they believe that solid scientific data back up the claim that the ancient structure features foundations that can be traced back more than 10,000 years. Some have claimed that the structure dates back as far as 20,000 years.

This has quite a few implications.

If a structure that old is proven to exist, it would mean that all current theories about when human civilizations came into existence would have to be rethought.

Scholars usually agree that all human civilizations began after the last major Ice Age, sometime around 11,500 BC. If Gunung Padang is older than that, it would mean that pyramid-building civilizations existed thousands of years sooner than previously thought.

“Our studies prove that the structure does not cover just the top but also wrap around the slopes covering about 15 hectares area at least,” the authors write.

“The structures are not only superficial but rooted in greater depth.”

The researchers analyzed Gunung Padang using ground-penetrating radar, seismic tomography, and a number of archaeological excavations. This has led experts to conclude that not only is Gunung Padang an artificial structure, but it features several layers that have been built over consecutive prehistoric periods, indicates Science Alert.

A pyramid-like structure built in several layers across thousands of years?

According to the recent study, the first, topmost layer of Gunung Padang is made up of different rock columns, walls, paths and sits above the second layer, some 3 meters beneath the surface.

Below this, they say is the third layer home to a number of large cavities and chambers. It extends around 15 meters beneath the surface and sits on top of the fourth layer which is believed to be composed of ‘lava tongue’ basalt rock, somehow carved by human hands.

The age of the layers

According to the recent study, the structure itself could date back a staggering 28,000 years.

Geophysicist Danny Hilman Natawidjaja believes the ancient pyramid may have been a religious structure.

‘It’s huge,” Natawidjaja told The Sydney Morning Herald in an interview back in 2013.

”People think the prehistoric age was primitive, but this monument proves that wrong.”

The paper presented at the annual meeting of the American Geophysical Union in Washington, DC has still not been peer-reviewed.