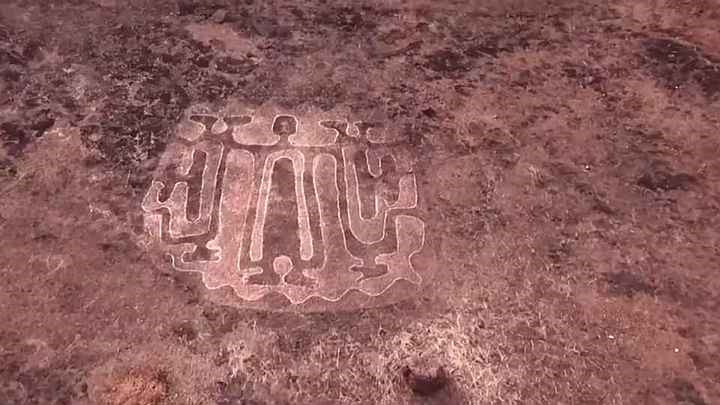 The discovery of countless rock carvings believed to be tens of thousands of years old in India has caused excitement among archaeologists who believe the ancient rock art may hold clues to a previously unknown civilization.

Some of the ancient rock drawings feature animals characteristic of Africa and not of India, a detail making the discovery even stranger.

The rock carvings, known as petroglyphs, offer clues into what many scholars believe could be an unknown chapter of India’s early history.

The petroglyphs are well-preserved, and most of the images recorded in the rocky and flat hills remained hidden from modern civilization for thousands of years.

According to reports, much of the petroglyphs remain hidden under the surface, with only a few visible, considered sacred by the natives of the area where the ancient rock art was found.

While little is known about the petroglyphs, how the rock carvings were made and their similarity to rock art found in other parts of the world have led experts to believe that they were created in prehistoric times and are possibly among the oldest ever discovered.

“Our first deduction from examining these petroglyphs is that they were created around 10,000BC,” the Maharashtra state archaeology department director, Tejas Garge, told the BBC.

The petroglyphs were discovered by a group of explorers led by Sudhir Risbood and Manoj Marathe, who began searching for more petroglyphs after encountering a few in the area.

“We walked thousands of kilometers. People started sending photographs to us, and we even enlisted schools in our efforts to find them. We made students ask their grandparents and other village elders if they knew about any other engravings. This provided us with a lot of valuable information,” Mr. Risbood told the BBC.

As explained by the BBC, eventually, the explorers discovered ancient petroglyphs and around 52 villages in the area. However, as noted by the explorers, only five villages were aware that the images even existed.

In addition to actively searching the area for new petroglyphs, Risbood and his team played an active role in the documentation of the petroglyphs and in persuading the authorities to get involved in the study and preservation of the rock carvings.

It is thought that the rock art was created by a hunter-gatherer community that was unfamiliar with agriculture: “We have not found any images of agricultural activities, but the drawings show animals that were hunted, and there are details of other forms of animals.”

And while most petroglyphs depict animals that are native to the region, they also illustrate animals such as rhinos and hippos that are not found in India.

This raises many important questions.

Did the people who created the intricate petroglyphs emigrate to India from Africa? Or were these animals found in India thousands of years ago? If the latter is true, the civilization that created the petroglyphs could be much older than experts initially thought.