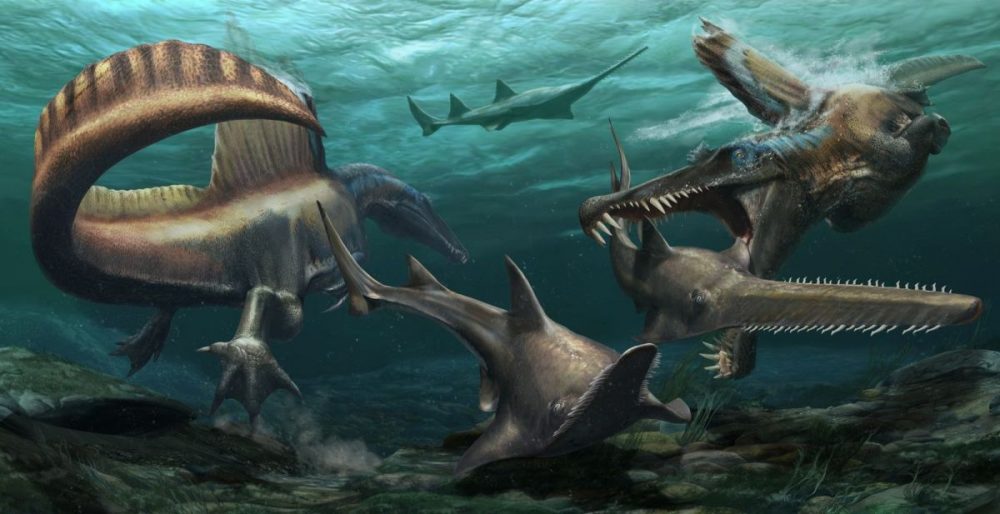 A group of researchers has published a study in the Journal Nature describing the first-known swimming dinosaur.

According to a new study published in the journal Nature, a series of newly found fossils are rewriting the history of dinosaur evolution and ecology.

Scientists have presented evidence which they believe unequivocally prove that Spinosaurus aegyptiacus, the longest predatory dinosaur known to science, was aquatic and used tail-powered swimming locomotion to hunt prey in a massive river system.

It is the first time that such an adaptation has been reported in a dinosaur. The findings, published in the journal Nature, are based on multidisciplinary research into the world’s only Spinosaurus skeleton, found in the Kem Kem region of the Moroccan Sahara.

The skeleton is now also the most complete to date for a Cretaceous predatory dinosaur from continental Africa.

Led by Dr. Nizar Ibrahim, a National Geographic explorer and paleontologist at the University of Detroit Mercy, the team returned to the site where parts of a Spinosaurus skeleton were first discovered in 2008. In a previous study, Spinosaurus had been identified as a Dinosaur that lived an amphibian lifestyle, something that was supported by its relatively short hindlimbs, broad feet, dense bones, and elongated jaws studded with conical teeth.

However, suggestions that it might have been a true water-dwelling dinosaur were met with considerable opposition, in large part because the partial skeleton provided little or no evidence of the propulsion structure needed to move such a giant dinosaur through of the water.

“This discovery really opens our eyes to this whole new world of possibilities for dinosaurs,” Professor Ibrahim revealed.

“It doesn’t just add to an existing narrative, it starts a whole new narrative and drastically changes things in terms of what we know dinosaurs could actually do. There’s nothing like this animal in over 220 million years of dinosaur evolution, which is pretty remarkable.”

The more we search, the more we learn. Between 2015 and 2019, scientists recovered many more fossils from the skeleton, including a remarkably full, fin-shaped tail capable of wide lateral movement and characterized by extremely long spines.

After preparing all the fossils, the team used photogrammetry to digitally capture the tail anatomy. To quantitatively assess tail performance, a team of Harvard researchers made a flexible model and attached it to a robotic system that mimics swimming movements. They then compared the swimming performance of the Spinosaurus model tail to the model tail of other animals, including crocodiles, newts, and other dinosaurs.

The results were entirely consistent with the idea of a “river monster” truly propelled by its massive tail, which means it could have been a dinosaur that was aquatic in nature.

“This new discovery changes our current understanding of dinosaurs and reflects Dr. Ibrahim’s boundless curiosity and dedication to uncovering the secrets of the Sahara’s dinosaurs,” said Alex Moen, vice president of explorer programs at the National Geographic Society.

“His work is at the nexus of science and exploration, and embodies the unique role National Geographic has in illuminating the wonder of our world.”

The study was published in the Journal Nature.