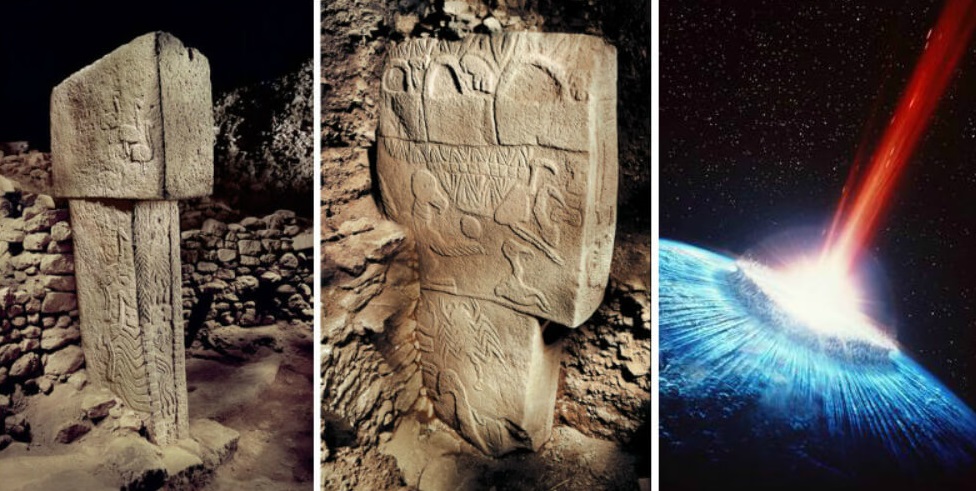 The symbols and carvings supposedly tell a story of how 13,000 years ago, a devastating comet impact took place on Earth.

One of the most enigmatic and mysterious temples on the planet’s surface is located in modern-day Turkey.

The site, identified by modern scholars as Gobekli Tepe, is home to dozens of massive stone pillars formed in different circles. Inside these circles, researchers found traces of symbols and hidden messages that its builders–who have still not been identified–left behind for us to see.

The symbols and carvings tell a story of how 13,000 years ago, a devastating comet impact took place on Earth.

Using computer simulations of the Solar System around that time, researchers in 2017 found that the carvings found at Gobekli Tepe describe a massive comet impact that took place around 10,950 BCE – which is curiously just around the same time a mini ice age caused the world, and civilization as we know it, to change forever.

This mini Ice Age is dubbed the Younger Dryas, and it lasted for around 1,000 years.

Scholars argue it is a crucial period for humanity since it was around that time that agriculture and the first Neolithic civilizations came into existence.

Experts have amply studied the Younger Drays. And while we know a lot about that specific period, we still have no clue what exactly caused it.

And while a cosmic impact has been the leading theory for years, we just haven’t found enough evidence to support that idea.

But scientists from the University of Edinburgh in the U.K. argue that some of the carvings found at Gobekli Tepe indicate how a comet strike may have been responsible for a history-changing period on Earth.

Speaking to the Telegraph  back in 2017, Sarah Knapton from The Telegraph explained: “I think this research, along with the recent finding of a widespread platinum anomaly across the North American continent virtually seal the case in favor of [a Younger Dryas comet impact].”

“Our work serves to reinforce that physical evidence. What is happening here is the process of paradigm change,” she added.

What experts found at Gobekli Tepe changed a lot. Not only did we find what is considered the oldest temple on Earth, but Gobekli Tepe may even have been one of the most ancient observatories ever created by humankind.

“It appears Gobekli Tepe was, among other things, an observatory for monitoring the night sky,” Sweatman revealed in an interview with the Press Association.

“One of its pillars seems to have served as a memorial to this devastating event – probably the worst day in history since the end of the Ice Age.”

The Oldest Temple on Earth

In fact, archeologists argue that the pillars and circles in modern-day Turkey were erected around 9,000 B.C., meaning that it predates outer popular ancient sites like Stonehenge by 6,000 years and the Pyramids by around 7,000 years.

Interestingly, scientists say that the symbols carved on some of the pillars at Gobekli Tepe date back even further to around 11,000 B.C.

The symbols detailing the comet impact were found on a pillar dibbed as the Vulture Stone and showed several animals in various positions across the stone.

For decades have these symbols baffled and puzzled experts. But researchers now argue that their meaning has finally been explained and that they actually correspond to depictions of astronomical constellations, showing comet fragments impacting Earth.

Furthermore, the symbol of a ‘headless man’ on the stone is believed to signify human disaster and extensive loss of life due to the comet impact.

The pillar was created by Gobekli Tepe’s builders as perhaps a monument inside the structure that may have served as a means of commemorating a devastating event.

The researchers from the University of Edinburgh also report that they discovered evidence of changes to the Earth’s rotational axis due to the comet strike.

And to understand what our ancestors wanted to say, we need to look at astronomy.

“Many paleolithic cave paintings and artifacts with similar animal symbols and other repeated symbols suggest astronomy could be very ancient indeed,” researchers explained.

“If you consider that, according to astronomers, this giant comet probably arrived in the inner solar system some 20 to 30 thousand years ago, and it would have been a very visible and dominant feature of the night sky, it is hard to see how ancient people could have ignored this given the likely consequences.”

You can read more about Gobekli Tepe, its symbols, and the comet strike in the research paper published in Mediterranean Archaeology and Archaeometry.