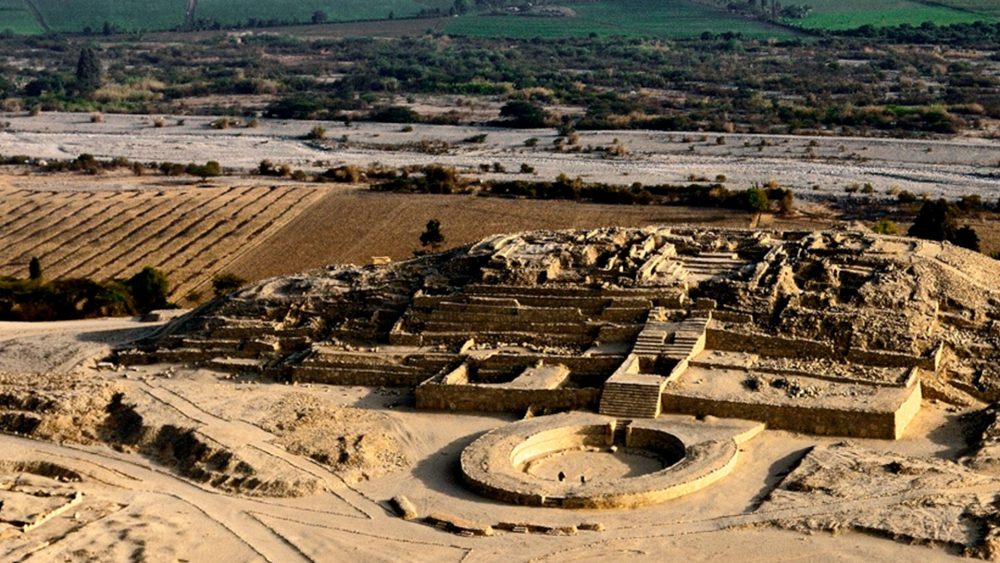 The Lost City of Caral, is one of the oldest pyramid cities in the world.

“Sometimes I’ll pick up the “heart of the jungle” fossil on my bookshelf, or pull out my old field notebooks from my desk drawer, warped by Amazonian rains and the river’s stream, the scent of the jungle still on their pages. I do this to remind myself that fiction does not have a monopoly on the unbelievable.”    Andrés Ruzo and Peru.

The oldest city in America

If you ask people about the oldest cities in Peru, they will most likely say Machu Pichu. Even though Machu Pichu is an ancient and magnificent place to visit, Caral is much older than any other city in South America.

Caral is an ancient citadel located 200 km away from the Peruvian capital, Lima.

Yet, many people don’t know that one of the oldest civilizations comes from modern-day Peru’s arid desert sands.

Caral is the incredible legacy of the Norte Chico culture.

This ancient city survived thousands of years only for new generations to explore it and piece by piece understand its complexity and how well structured, organized and sophisticated ancient people were.

The main reason why this ancient city survived for so long is thanks to its mounds. What we now know today to be pyramids were initially thought to be naturally forming hills, which is why the ruins did not attract much attention from either archeologists or looters.

With new technology and the persistence of archeologists, radiocarbon dating, as well as excavations and a meticulous study of the ruins, we  eventually uncovered some of the secrets Caral has been hiding for millennia.

Although it was known that the remains were likely old, no one dared to say the site was 4,500 years old when its ruins were originally found.

However, new studies of the site have allowed us to finally understand that Caral and its ruins are far older than initially thought.

The age of the structures at Caral isn’t the only thing that is impressive for anthropologists.

What experts find most fascinating are the in-depth stories the city tells of humankind.

Located on a desert plateau in the heart of a lush valley, Caral covers 163 acres.

Caral’s building structure reminds us of a modern-day city, with districts for specific trades and places where rich and poor would live.

Around the massive city plaza, we can find half of dozen flat-topped pyramids.

Inside the pyramid, there are sacrificial altars and staircases suggesting that the ruler lived in the pyramids’ dwellings.

From there, the emperor oversaw the entire city.

The commoners lived in homes on the ground, and large sunken plazas prove those elaborate public ceremonies were often held in the city.

It remains unknown why Caral was abandoned around 2000 BC.

Records are showing that severe drought might have been the reason for massive inland migration.

The Caral-Supe civilization lived in what is known as the Norte Chico area in Peru. This area stretches along the coast from the northern tip to the center of the country.

Based on archeological findings, experts believe that the population of Caral was around 3000 people.

It is known that the culture that built Caral was an efficient farming society that created a rich and complex socio-political culture. in Caral.

They lived along the western coastline, mostly relying on an abundance of anchovies, sardines, guava, squash, and beans for subsistence.

Interestingly, there are no real signs of them cultivating cereal or grain in those regions.

Cotton was the main non-edible product growing in that region. People used it to make a fishing net, clothes, and ornaments.

The most exciting discoveries where music instruments made of different animal bones (llama bones for trumpets and pelican bones for flutes).

Part of the discoveries were also traces of alcohol and drug production.

The worship of multiple deities was quite common among the Norte Chico people.

However, who these gods were or what they represented remains a mystery to this day, as does the religion’s importance in their culture in general.

Some believe religion and worship were almost a side-note of Caral’s existence.

Others believe they were the prime impetus for its very construction.

One thing is sure; the Norte Chico people were anything but primitive.

Carvings of monkeys found on their musical instruments hint their exploration of the Amazon basin.

A quipu, or knot-record (also called khipu), was used by the Incas and other ancient Andean cultures to keep records and communicate information.

Further excavations of Peru’s Supe Valley continues every day, and incredible findings are being reported.

Ancient cities, pyramids, and plazas are emerging from an area long thought to be unliveable due to the land’s harshness.

Caral is one of 20 sites found in the Supe Valley area covering over 80 square kilometers.

It is arguably the most extraordinary ancient wonder discovered in South America so far.

If you’re visiting Peru and share our passion and love for ancient history, this place must be on your bucket list.