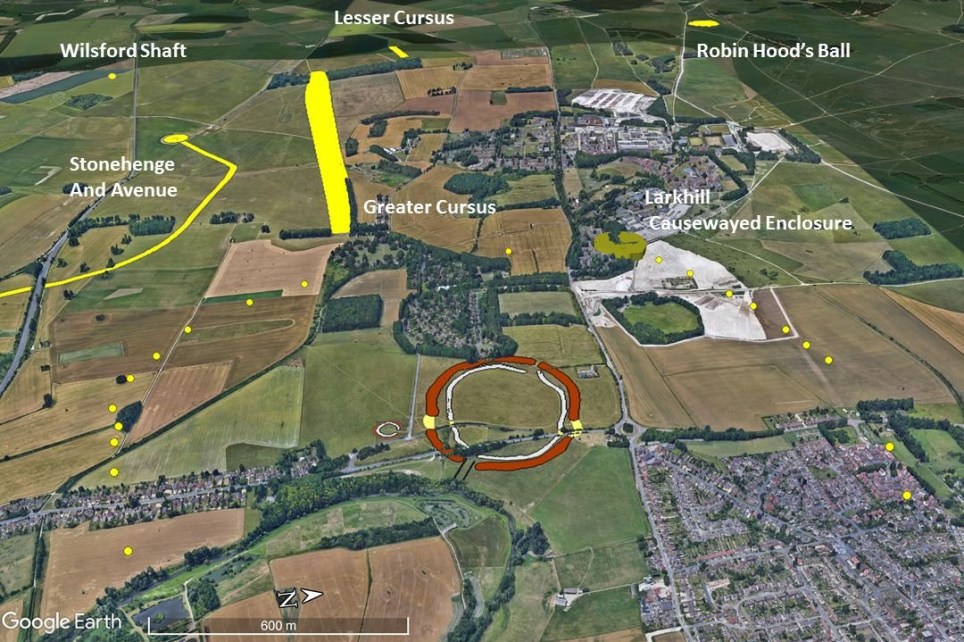 Researchers have hailed it an "astonishing discovery." The monument is more than 2 kilometers in diameter.

A group of archaeologists has discovered an ancient monument believed to date back around 4,500 years, not far from Stonehenge, an ancient Neolithic monument shrouded in mystery.

The new monument is made out of over 20 massive prehistoric shafts, ten of which are more than 10 meters wide and 5 meters deep—the ancient shafts for a massive circle over two kilometers in diameter around the so-called Durrington Walls henge.

Archeological analysis of the site suggests that the shafts are ancient, likely from the Neolithic, and excavated around 4,500 years ago, around the time when the Durrington Walls were erected.

Although the exact purpose of the shafts remains a mystery, archaeologists argued that they might have served as a kind of boundary area to a sacred area associated directly with the henge. The discovery of the vast monument saw researchers from the University of St Andrews join forces with colleagues from Birmingham, Warwick, the University of Wales Trinity Saint David, and the Scottish Universities Environmental Research Center.

The multidisciplinary study of the site allowed the discovery to come to light.

“Yet again, the use of a multidisciplinary effort with remote sensing and careful sampling is giving us an insight into the past that shows an even more complex society than we could ever imagine. ‘Clearly sophisticated practices demonstrate that the people were so in tune with natural events to the extent that we can barely conceive in the modern world we live in today,” revealed Dr. Richard Bates.

In addition to the lost history the shafts reveal, the sedimentary infills offer unprecedented clues and a rich archive of previously unknown environmental factors of the region, shedding light on the evolution of the land throughout millennia.

“The sedimentary infills contain a rich and fascinating archive of previously unknown environmental information. ‘With optically stimulated luminescence profiling and dating, we can write detailed narratives of the Stonehenge landscape for the last 4,000 years,” explained researcher Tim Kinnaird.

The newly-found monument offers unprecedented insight into the history of the people that are thought to have participated directly in the construction of Stonehenge.

The group of researchers explained that Durrington Walls is key to understanding the “wider Stonehenge landscape” since it is where the builders of Stonehenge likely lived and feasted.

The discovery of the new monument is helping experts better understand the lives and beliefs of the Neolithic monument builders.

“The Hidden Landscapes team has combined cutting-edge, archaeological fieldwork with good old-fashioned detective work to reveal this extraordinary discovery and write a whole new chapter in the story of the Stonehenge landscape,” Snashall revealed.

Stonehenge, a prehistoric monument in Wiltshire, England, consists of a circular wall of standing stones, each approximately four meters (13ft) high, and around 2.1 meters (7ft) wide, with an average weight of 25 tons.

Stonehenge is considered the densest and complex Neolithic monument in England. Archeologists estimate it was built anytime between 3,000 to 2000 BC. The monument’s famous bluestones are believed to have been raised by the ancients from around 2,4500 to 2,200 BC.