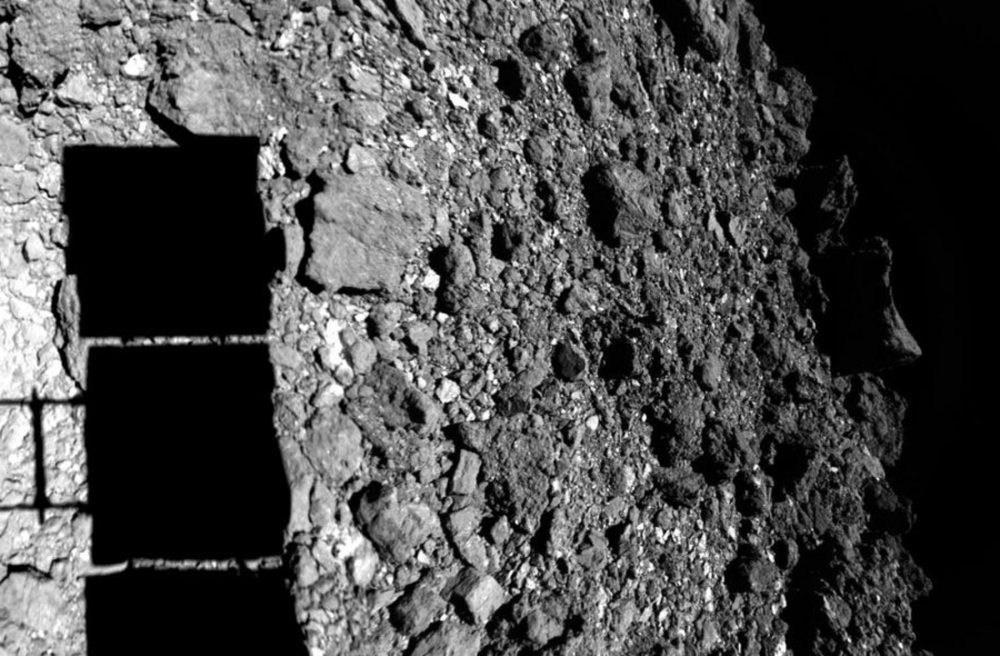 Watch the moment a spacecraft lands on an asteroid some 300 million kilometers away.

A spacecraft from Japan visited an asteroid measuring approximately one kilometer in diameter called Ryugu (officially designated 162173 Ryugu). In June 2018, JAXA’s (Japan Aerospace Exploration Agency) Hayabusa2 spacecraft arrived at the asteroid remaining in orbit around it and studying it.

But the mission is more than just studying an object 300 million kilometers away. Hayxabusa2 was tasked with mapping, exploring, and sampling the asteroid.

In February 2019, the spacecraft briefly touched the asteroi0d surface and fired a small projectile to expose subsurface soil and debris and collect it with the spacecraft sampling horn. This object was completed, and the spacecraft returned to orbit.

Then, in July 2019, the spacecraft performed a second sampling from the asteroid’s subsurface. It fired a large copper projecting from an altitude of around 500 meters to expose pristine material. The projectile created a crater of approximately 20 meters in diameter, exposing the material.

In November 2019, the spacecraft was given commands to leave orbit around Ryugu and head back home with the materials it had collected.

Luckily for us, everything the spacecraft did while it was in orbit around the asteroid and on its surface was photographed and captured on film. This means that we have the unprecedented opportunity of observing a spacecraft orbit and land on the surface of an asteroid located hundreds of millions of kilometers from Earth.

This recently released video reveals the fascinating journey of the Hayaabusa2 spacecraft, revealing mind-boggling details of the emission and a rare view at the surface of a distant asteroid.,

The asteroid sampling mission was an unprecedented calling and allowed scientists to peer into the history and geology of objects formed in the early solar system. The recently revealed video shows the exact moments when the spacecraft lands on the asteroid and collects the distant rocky body’s surface samples to bring them back for further studies on Earth.

The few seconds that the spacecraft spent on the asteroid collecting the samples have helped astronomers get a better glimpse at its surface, assisting experts in understanding its age and geological history. The touch-and-go moment has also helped scientists unravel a mystery about the odd color variations on Ryugu’s surface.

Observations of the asteroid’s surface revealed that Ryugu’s landscape was composed of two different material types, clearly distinguishable in color. One of the materials was red, while the other one had slightly bluer tones. However, what exactly caused the color variations was something scientists could not predict.

The video of Hayabusa2 touching down on the asteroid was captured by the onboard cameras allowing us to see the sampling process in unprecedented detail. The footage reveals disturbances on the surface caused by the powerful thrusters of the spacecraft.

It also shows how the spacecraft’s thrusters to clear a dark reddish material coating on the surface. The footage has helped scientists understand the composition of the asteroid.

Based on data so far, the discovery possibly means that the reddish color material on the asteroid may be a sort of suntan.

In other words, as Ryugu orbits the sun in an elliptical pathway, it turns towards the sun. During this short rotation, the asteroid parts that point to the sun are struck with intense solar heat, which likely resulted in the red-colored material on its surface. So there you have it, evidence that even asteroids can get a sunburn.

Hayabusa2 is currently speeding towards Earth to deliver the precious payload gathered from asteroid Ruyugu and is expected to arrive home in December 2020.

The Hayabusa2 spacecraft, which is roughly the size of a small car, is currently speeding away from Earth, heading towards its next target of interest.

The Hayabusa2 mission has proven to be one of great success, which is why its mission has been extended to 2031, when the spacecraft is expected to reach its next target, the asteroid dubbed 1998 KY26–a nearly spherical sub-kilometer asteroid, classified as a near-Earth object of the Apollo group.

Hayabusa2 will now ignite the ion engines to begin full-scale orbit control for the Extended Mission. The first goal is asteroid 2001 CC21. So, people of Earth, here we go again.

Interestingly, mission specialists have revealed that between 2021 and 2026, Hayabusa2 will conduct several surveys of exoplanets.