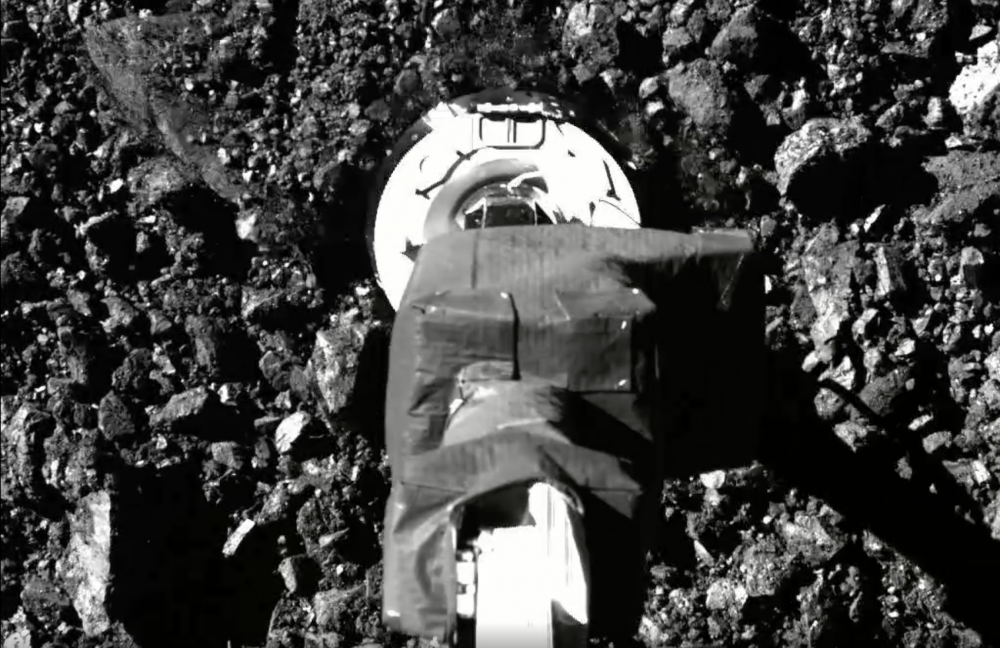 The spacecraft spent approximately 5 seconds collecting material from the surface, with most sample collection occurring within the first 3 seconds.

The OSIRIS-REx mission has proven once again that when humankind sets out to do something and works hard towards that goal, it can probably do anything. More than 50 years ago, we wrote history when then Mankind set foot on the surface of the Moon.

In the next few years, we will likely land on Mars, and by that time, we should already have a small outpost on the moon.

As we progress technologically, we create tools that allow us to do things we’ve only dreamed of decades ago. Who would have thought that it was possible to land a man on the moon a century ago? Back then, this was probably no more than science fiction.

Fast forward a few decades, and we actually did it.

The same thing can be said about landing a spacecraft on an asteroid some 320 million kilometers away from Earth. But humanity did it. Not only did we land on the asteroid—officially designated Bennu-—but the OSIRIS-REx spacecraft managed to snap surface material as it briefly landed on the massive asteroid’s surface.

Asteroid Bennu is an asteroid whose origins can be traced back to the very formation of our solar system, so studying its composition and surface materials is of great importance if we want to understand better how our star system formed and how our planet—and all other planets—came into existence.

Video of the event

It completely blows my mind that NASA scientists have managed to complete their mission. It is fascinating to think—understand—and witness how a spacecraft arrives at a distant asteroid, orbits it, taking countless photographs, and then makes its way, carefully, toward the surface, lands, collects material, and then shoots back into space, safely into orbit. It is fascinating and proves that humankind’s ingenuity has no boundaries.

After all, we are species of the stars, and to the stars, we are to return.

To show off their achievement, NASA has published the first sequence of images of the sampling event on the surface of Bennu by its OSIRIS-REx spacecraft on October 20.

The image sequence—video—shows the field of view of the SamCam imager as the NASA spacecraft approaches and lands on the surface of the asteroid located around 320 million kilometers from Earth. The sampling event took place on the so-called Nightingale site, with the spacecraft landing one meter away from its designated target location. The team on Earth received confirmation at 22.08 UTC that a successful landing had occurred.

Preliminary data shows that the 30-centimeter-wide sampling head touched Bennu’s surface for approximately 6 seconds, after which the spacecraft fired its thrusters, which returned it into orbit around the asteroid.

The spacecraft’s sampling arm, called the Touch-And-Go Sample Acquisition Mechanism (TAGSAM), is visible at the bottom of the frame. The round head at the end of TAGSAM is the only part of OSIRIS-REx that came into contact with the surface during the sample collection event.

In the middle of the image sequence, the sampling head is positioned to make frontal contact with the asteroid’s surface.

This means that the main part of the spacecraft remained above the surface, and only one instrument touched down on the asteroid.

NASA has revealed that upon initial contact, TAGSAM appears to crush some of the porous rocks on the surface of Bennu.

A second later, the spacecraft empties a nitrogen gas bottle, which mobilizes a substantial amount of the material from the sample site.

Preliminary data suggests that the spacecraft spent approximately 5 of the 6 seconds collecting material from the surface, with most sample collection occurring within the first 3 seconds.

The TAGSAM is designed to trap material from the surface, and the mission team will assess the amount of material collected through various activities of the spacecraft.

The sampling vent, according to plan and preliminary telemetry, suggests that OSIRIS-REx is in good health. At the time of contact with the asteroid, the spacecraft traveled 10 centimeters per second. After collecting the material, it shot up into space with a speed of 40 centimeters per second, NASA has revealed.

Scientists will now calculate how much of the material has been collected.

On May 10, 2021, OSIRIS-REx turned on its ion thrusters for 7 minutes, thus starting the return flight to Earth. The journey to our planet will take over two years, according to the NASA website. Osiris-Rex’s path will not be direct. It will fly around the Sun twice covering more than 2.3 billion kilometers total.

It is expected that upon approaching our planet, the station will drop a reentry capsule into the atmosphere, which is to land at a test site in Utah on September 24, 2023, after which it will be delivered to the laboratory for autopsy.

All sources and references are like throughout the article. If something doesn’t seem right, please contact us.