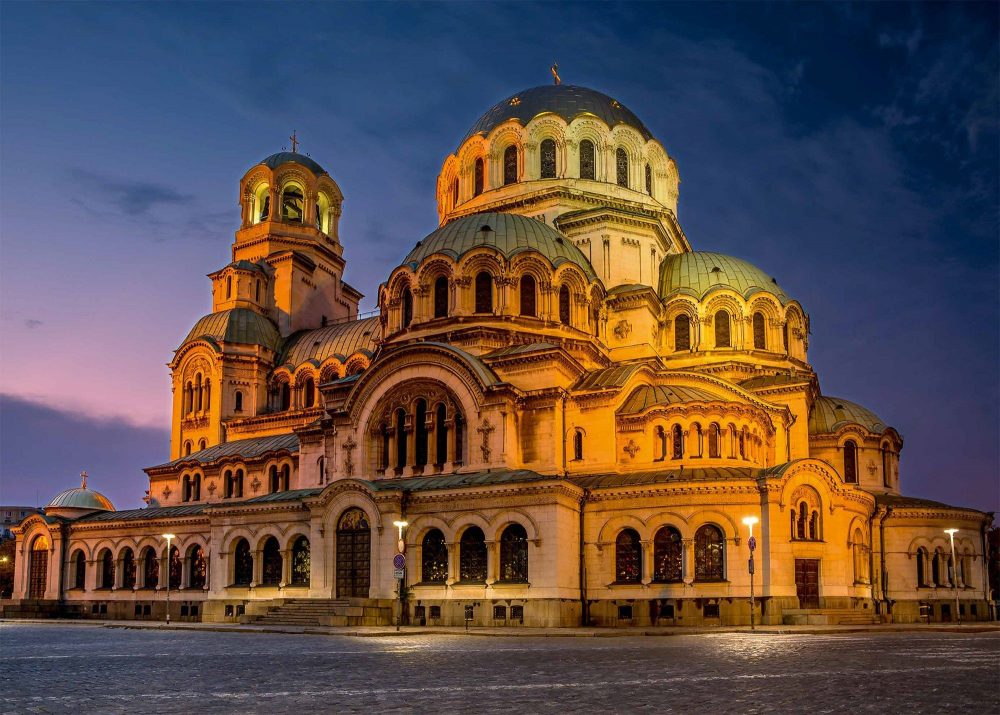 Few countries can boast of such a rich and ancient history as Bulgaria. If you are looking for new interesting tourist locations for your next trip, Bulgaria is only one plane ticket away.

Countries like Bulgaria rarely fall in the field of view with the existence of the major tourist locations in Europe. The truth is that most of us prefer to see places like Paris or Barcelona, ​​or one of the countless beautiful corners of Italy.

This is why we need to bring awareness to the smaller but not less important countries and locations packed with countless life-changing sites and monuments like Bulgaria or most of the neighboring Balkan countries.

If you are interested in world history, you have undoubtedly heard at least a little about Bulgaria for one reason or another.

Maybe because here are some of the most ancient temples and cities in the world, or because Bulgaria is the oldest country in Europe, which has never changed its name.

Or did you come across information about the ancient peoples of these lands while reading about the Thracians, Greeks, and Romans? Or maybe you have heard that Bulgaria was once an empire of similar might to the Roman and Frankish Empires?

Countries like Bulgaria have so much history to offer that a week or two spent would never be nearly as enough. If you have never been in Bulgaria, see just a small number of the greatest landmarks below and if you make the decision to visit, chances are that you will want to return for a second, third, or the tenth time.

Known as the Bulgarian Jerusalem, the Rila Monastery is definitely worth a visit.

This picturesque Eastern Orthodox monastery, located in the Rila Mountains, is less than two hours south of the capital Sofia. It is named after St. Ivan Rilski, a hermit from the 10th century, who lived in a cave near the current monastery.

The monastery itself was built, burned, and rebuilt over the centuries, the last construction activities being from 1800.

Entering the courtyard, you will be amazed by the perfect harmony of the church with its exquisite arches of black and white stripes, tiled roofs, and five domes that reach to the sky.

In the distance are the peaks of the Rila Mountains, which complement the oasis of tranquility – an ideal place for everyone.

The Madara Rider (the literal translation from Bulgarian is horseman) is a unique relief and work of art. It was established in the early years of the Bulgarian state, in the early 8th century. This is the only relief of this kind, without a parallel in Europe, and has reached us in its original state!

Who exactly is the Madara horseman? The impressive stone relief depicts the figure of a horseman killing a lion. The interesting thing, in this case, is how the relief was created on a rock over 100 meters above the ground.

The Rider is located near Madara – a village that had important sacred functions during the First Bulgarian Kingdom, before the country’s conversion to Christianity in the 9th century.

The Thracians are one of the earliest civilizations that inhabited the territory of Bulgaria. The Thracian tomb near Kazanlak is a unique work, a masterpiece of the creativity of the ancient Thracians.

This is the only such object in the world and it is definitely worth seeing! The frescoes are extremely well preserved, and the construction has reached us in its original form and proves the remarkable progress of Thracian culture.

The most interesting part of the tomb is the fantastic frescoes in the burial hall, dating from the 4th century BC. They depict in great detail and with rich color horsemen, aristocrats, and their wives. Tourists can only visit a literal replica of the tomb, as the original is closed to visitors in order to preserve the valuable murals.

The Sveshtari tomb is distinguished by its rich sculptural decoration. It dates from the 3rd century BC. and was used as the tomb of a wealthy Thracian ruler. He was buried with his five horses!

The Thracians used rich burial techniques, and the wealthier members of society were sent with a lot of gold. Two interesting examples of this are the Panagyurishte treasure (9 golden vessels with incredible decoration) and the Varna necropolis where the oldest golden treasure in the world was found.

The most remarkable part of the decoration are the ten caryatids surrounding the funeral hall. These are columns in the shape of women, whose body smoothly flows into the shape of a flower.

5. The Old City of Nesebar

Nessebar is an ancient town and a large seaport on the Bulgarian Black Sea coast. Although today it is a popular seaside destination, in the past it was a Thracian settlement and is over 3000 years old!

At the beginning of the 6th century BC, the town was part of a Greek colony. The remains date mainly from the Hellenistic period and include the Acropolis, the Temple of Apollo, the Agora, and a wall of Thracian fortifications. Due to the many historical landmarks and buildings, UNESCO included Nessebar in the list in 1983.

The small town consists of two parts, separated by a narrow road. It was additionally created to connect the ancient part (island) with the modern city on land.

Unlike the previous locations, Plovdiv is an entire city, in fact, the second-largest city in Bulgaria. It is one of the most ancient cities in Europe and it is simply overfilled with ancient sites to name just one or two. In other words, you will need at least a day or two to see it all!

The unique cultural and historical heritage of Plovdiv covers three main epochs – Antiquity, Middle Ages, and Renaissance. Each of them includes significant tourist attractions in the city. They are a journey to the mysterious past, arousing curiosity to discover modern adventures.

The city has preserved many ancient monuments, including the Ancient Theater, the Roman Odeon, the Agora (Roman Forum), the Roman Stadium, the late antique building “Eirene” and others.

Simply said, if you have one day to spend in Bulgaria, you should choose Plovdiv as your destination.

The Boyana Church, known as one of the most perfect and fully preserved monuments of Eastern European medieval art, is located eight kilometers from Sofia at the foot of Vitosha Mountain, among the huge trees of a green yard.

The history of the temple dedicated to St. Nicholas and St. Panteleimon takes us to the distant tenth century when a small church was built on this place. In the eleventh century, there was a fortification there, which played an important role in the wars with Byzantium.

Later, in the 13th century, by the will of the Bulgarian tsar Kaloyan, the old church was expanded, a new two-story church was built next to it and both were richly painted on the inside.

But the Boyana Church owes its world fame primarily to its unique frescoes from 1259, the work of an unknown painter from the period of the Second Bulgarian Kingdom (XII-XIV century), which are one of the most valuable collections of medieval paintings in the world.

The depicted 89 scenes and compositions with 240 images of saints, angels, as well as the donor and royal portraits are strictly individualized and are characterized by psychologism and vitality.

If your travels take you to Sofia, definitely give the Boyana Church a couple of hours of your time.

Perperikon is a huge rock massif in the eastern Rhodopes, which is believed to have originated about 8000 years ago. The stone monument rises 15 kilometers from Kardzhali, near the Perpereshka River, from which ancient people are said to have mined gold.

Historically, Perperikon is extremely ancient. Cult activity there began in 5,000 BC, associated with the cult of the Sun God. As the millennia went by and civilization developed, the temple complex grew and underwent changes to reach the testimonies that are unfolding before us today.

It is a kind of fortress with a strong fortress wall, behind which there are two suburbs to the north and south. Centrally located, is a palace carved into the rocks with an area of ​​about 10 thousand square meters, and on the highest part of the hill, closest to the gods, is the acropolis.

We cannot describe the countless sections and sites in the ancient monument as it would take a while. For now, you need to know that this is the most ancient and largest megalithic complex in the Balkans and Europe, actually. If you plan to see it while you are in Bulgaria, make sure to dedicate an entire day to Perperikon as the site itself takes hours to explore without counting the road and then the hike to reach it.

They say that nature is the greatest artist. Proof of this statement can be found in Northwestern Bulgaria, where lies one of its most incredible creations – the Belogradchik rocks.

The amazing rock formations cover a huge region and for centuries have inspired the human imagination, which names them with the most bizarre names.

Along with the impressive natural rock formations, you can visit the Belogradchik Fortress.

The Belogradchik fortress is one of the best-preserved in Bulgaria and also Europe. It was built in the 3rd century by the Romans, who used the natural protection of the rocks. It is assumed that its original foundations were laid by the Thracians.

Over the centuries, the fortress “Kaleto” served the Byzantines, Bulgarians, and Turks. It consists of three yards, each with the possibility of self-defense. The fortress functioned continuously as a military ground until the Serbo-Bulgarian War in 1885.

Last but not least, there are over 100 natural caves in the region of the Belogradchik rocks which complete the picture and give you another reason to spend the day on this unique site.

In general, we would recommend seeing the entire city of Veliko Tarnovo, the old capital of Bulgaria but if we had to choose one location, it would be the Tsarevets Fortress.

The Tsarevets Fortress is synonymous with greatness, glory, and wealth! This is a unique place to meet the past of Bulgaria and the history of its great kings. The fortress is located on the hill of the same name in the old part of Veliko Tarnovo, not far from the center, and has been turned into an architectural museum-reserve.

The history of this site goes back to antiquity when the ancient Thracian tribes inhabited the region. Later on, it was a major city in the Roman and Byzantine Empires, and remains of all ages have been excavated and restored for tourists to see.

The feeling of walking in these glorious lands is incomparable. You will be amazed by the grandeur of the reconstructed royal palace with its throne room, palace church, and royal chambers.

Above the palace, at the very top of the hill, is the restored Patriarchal Church. It impresses with its scale and unique architecture, and its iconography recreates the rise and fall of the Second Bulgarian Kingdom.

A special note of mystery creeps around the restored Baldwin Tower. The story goes that the first Latin emperor Baldwin, captured later in the battle of Edirne, was imprisoned and later died there.

Other than Tsarevets, we urge you to spend a day in Tarnovo as it is not only full of ancient sites and monuments but the actual location of the city provides a glamorous view of the Bulgarian countryside.