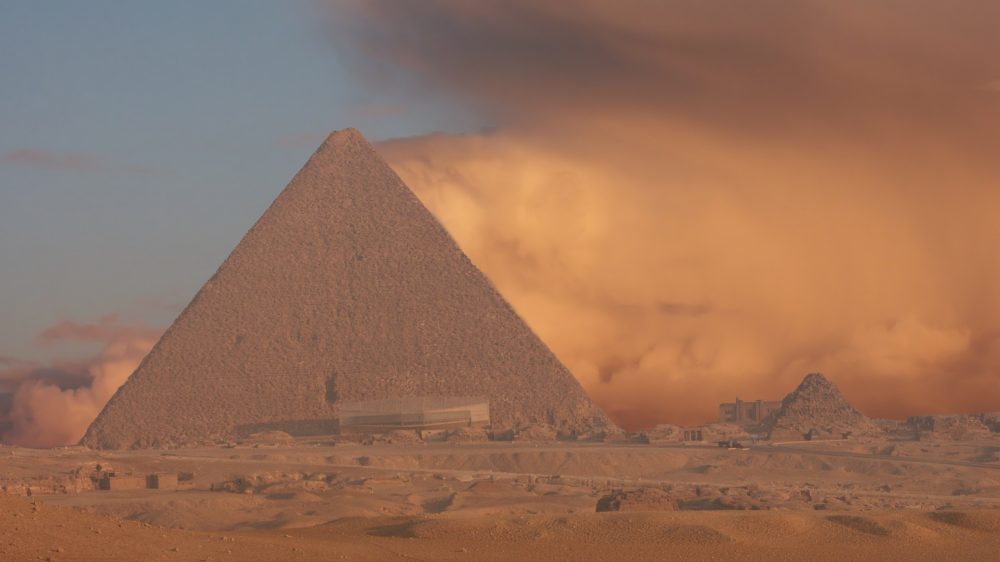 The story of the ancient Egyptian pyramids starts with the most humble beginnings in predynastic and early dynastic times.

The ancient Egyptian pyramids’ story starts with the most humble beginnings in predynastic and early dynastic times.

According to mainstream Egyptologists, the birth of the Egyptian pyramid–the Step Pyramid of Saqqara–starts not with the monument’s construction but generations before.

According to mainstream academics, the first Egyptian pyramid was that of King Djoser, who ruled over the land of Egypt some 4,700 years ago, during the Third Dynasty.

The pyramids of Egypt have received undivided attention for thousands of years. And if you ask any traveler who has been to Egypt and other parts of the world which ancient monuments left the strongest impression on him, he will probably say the pyramids of Egypt.

Erected when Egypt was one of the wealthiest and most powerful civilizations on Earth, the pyramids–especially those at Giza–have captivated humankind for millennia. Their scale, complexity, and design reflect the high level of advancement of the ancient Egyptian civilization and tell us that already 4,500 years ago, humankind was capable of some of the most remarkable engineering feats the world has ever seen.

The pyramids of Egypt were built from the start of the Old Kingdom, all the way to the Middle Kingdom, around 1,800 BC.

The greatest Egyptian pyramids were built over the course of three generations; Sneferu, Khufu, and Khafre. If Sneferu did build the pyramid at Meidum–he likely did–then his pyramids alone contain more than 3.5 million cubic meters of stone.

This is mind-boggling since all other pyramids of the Egyptian kings combined contain only 41 percent of the pyramids of Sneferu, his son Khufu and grandson Khafre. Although Fourth Dynasty king Menkaure–the builders of the third-largest pyramid at Giza–still used multi-ton stones to construct his pyramid, in terms of total volume, his pyramid is even smaller than the Pyramid of Djoser.

Today the traveler on the Nile enters a wonderland at whose gates rise the colossal pyramids of which he has had visions, perhaps from earliest childhood.     James Henry Breasted

Pyramids are cool, but there’s more

Whenever the pyramids are mentioned, the Great Pyramid of Giza springs to mind. However, he who visits Egypt has more to look at than just the majestic pyramid at Giza. Many other monuments in Egypt that aren’t pyramids are equally worthy of our time. Numerous temples across Upper and Lower Egypt tell a story written in stone.

Despite the many treasures of ancient Egypt, the pyramids are the greatest tourist attraction. Although the Great Pyramid of Giza is certainly the greatest, many other pyramids in Egypt are equally stunning and whose history is a treasure of their own.

The Step Pyramid of Djoser, for example, is important because it is considered the oldest pyramid in Egypt. The pyramid’s construction also kicks started a revolution in ancient Egyptian architecture, as royal monuments were now built using much stronger and heavier materials; limestone and granite.

The pyramids of Egypt can be grouped in several geographical areas from north to south. There are groups in the so-called Memphite necropolis. The northernmost pyramid is that of Abu Rawash, where Khufu’s successor, King Djedefre, built his pyramid.

The second group of pyramids is located south of Abu Rawash at Giza, where the most importing Egyptian pyramid stands, and several others surround it. The third group of pyramids can be found at Zawyet el Aryan, some 7 kilometers south of the Giza pyramids and their surrounding structures.

The fourth group of pyramids is located further south, some 6 kilometers from Zawyet el Aryan, where the pyramids of Abusir are located.

Below these are my favorite pyramids, those that were built at the Saqqara necropolis. The pyramids at Saqqara are divided into two groups; Saqqara north and Saqqara South.

Further south comes another–seventh group of pyramids where we find some of the most influential pyramids in Egypt’s history; the pyramids at Dahshur, where the Bent and Red Pyramids of Sneferu stand out. Finally, there are several other Middle Kingdom pyramids, but they are of a lesser form.

There is another eighth group of pyramids some 5 kilometers south of Dahshur, where we find a series of mud-brick pyramids from the 12th Dynasty. This region is called Mazghuna or Al Mazghunah. The area is home to unfinished pyramids.

The Pyramid at Meidum–Sneferu’s early pyramid–makes up the tenth group of Pyramids.

Egyptologists believe that the concept of a pyramidal tomb–the pyramids were tombs, according to experts–is the result of centuries of architectural and religious development and experimentation. Fakhry (p.3) tells us that the earliest ancient Egyptian royal tombs are of great interest because they demonstrated the development of an early funerary architecture that existed prior to the pyramids. Egyptologists believe that the Step Pyramid is the direct result of the mastaba tomb evolution and that the pyramids arose from the mastaba shape.

The tombs of ancient Egypt’s earliest kings have been found near Abydos in Upper Egypt, more than 550 kilometers from where the Giza pyramids stand today. Abydos was the royal necropolis of the southern capital, the ancient–now lost city of Thinis.

These tombs are believed to date back to around 3,200 BC. Not long after, the royal necropolis of Saqqara arose in the desert plateau west of the northern capital Memphis. It is believed that the mastabas that were built in the predynastic and early dynastic period of Egypt served as starting points or the construction of the Old Kingdom pyramids. The idea that Egypt’s pyramids were tombs is a highly debated subject among people who believe the pyramids served a different purpose and were not pyramids.

Egypt’s mastaba tombs were built over several millennia, starting in predynastic times, long before Egypt was unified and the first pyramid was built. As revealed by Fakhry, one of the difficult problems Egyptologists are faced with is the existence of two or more “tombs” of the same kind. The king could only have been buried in one.

The most reasonable solution to this enigma, say experts, is that one monument served as a tomb, and the other as a cenotaph, an empty tomb honoring the king. Both the royal necropolis near Abydos and Saqqara are home to royal tombs, and although some details are different, their purpose remains the same. All were built of mud-brick in the form of huge rectangles.

These massive rectangles are called mastabas because they resemble the brick benches placed outside the houses in Egyptian villages. Beneath the mastaba, the builders would construct chambers and rooms where funerary goods and the Pharoah’s tomb were placed.

As I’ve already written in a few previous articles both on Curiosmos and my website, various pyramids in Egypt are very well known for not being tombs of Egyptian pharaohs. The following example of such pyramids is the so-called provincial pyramids built in the Egyptian provinces.

There were eight such pyramids, of which seven remain standing today. Their exact purpose remains debated, but experts say that these were likely no more than cenotaphs representing and honoring the Pharaoh.

Although Egypt numbers pyramids at around 100-120, there are no more than a few standing today. If I were to pick out the most unique pyramids, I’d have to include the following.

First of all, I need to mention the Step Pyramid of Djoser, not only because it is considered the oldest pyramid in Egypt, but because of its significance and what lies beneath it; a massive, underground labyrinth measuring nearly 5.7 km in length.

Never again would such a massive pyramid be built in the history of Egyptian pyramids.

However, in addition to the Step Pyramid of Djoser, I have to include the Bent Pyramid of Dahshur because it represents the first steps toward completing a smooth-sided pyramid. It is one of the few pyramids in Egypt that still retains most of its casing stones.

The Red Pyramid of Sneferu at Dahshur is also one pyramid I have to include because it is ancient Egypt’s first successful smooth-sided pyramid and Egypt’s third-largest pyramid. This ancient pyramid laid down the foundations for the construction of the Great Pyramid of Giza.

Reference and sources: All sources and references are embedded in the article.